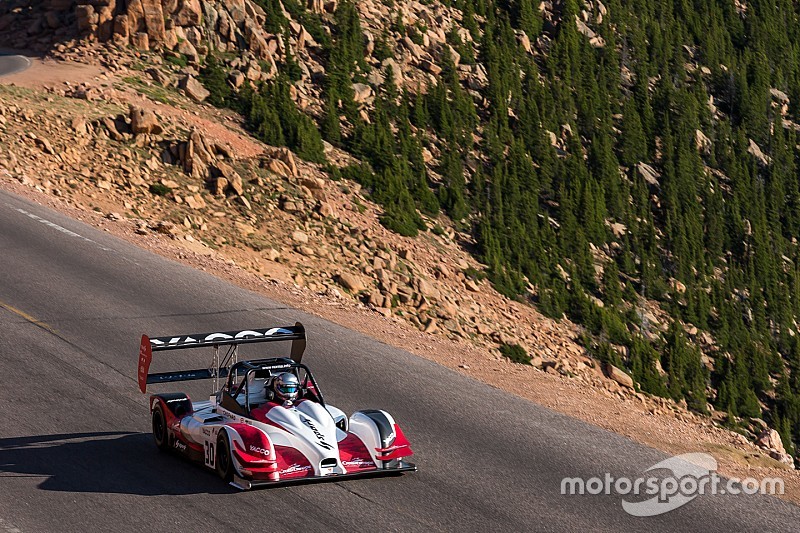 Author of the fastest time in qualifying on the legendary Pikes Peak road in the Norma M20 RD Limited Spec-2016, Romain Dumas finished the week’s worth practices on Friday.

This final session, on the top portion of the climb, was unfortunately shortened due an engine failure, which will penalize the Alès, France native. At the wheel of the other car entered by the team, a Porsche 911 GT3 Cup, Raphaël Astier continued his discovery of the "Race to the Clouds".

Following the qualifying session for the Electric, Pikes Peak Open and Time Attack 2 classes, Romain Dumas held on to his fastest time in the bottom section, giving him pole position for the race up Pikes Peak. He will therefore be the first "car" to take the start on Sunday, following the bikes. A purely symbolic honor as the pole position has no real impact on the race itself.

An engine failure during practice is obviously not an ideal situation,

For the race, Romain Dumas had planned on continuing preparation work on Friday with the final free practice session on the top section of the mountain, between Devil’s Playground and the Pikes Peak summit. The 2016 Le Mans 24 Hours winner had not driven on this section since his winning run in 2014 and was unable to find his marks again. During his first run of the day, the engine let go, ending his practice session. While the team works to replace the 2.0l turbo engine, Dumas will have to wait for race day to once again drive the last few miles of the climb.

"An engine failure during practice is obviously not an ideal situation, but we have to deal with it" explains Romain. "It’s even more of a handicap because the last section is so unique, with blind corners, huge drop-offs in several areas and numerous bumps. We’ll be a little bit in unknown territory. It’s too bad because we had progressively improved the car on different sections, the fast lower part and slow middle. We also showed good pace, but we know that the electric prototypes are competitive, especially with their power output. Rhys Millen is the logical favorite to defend his victory from last year. But I’m not the type to give up. We’ll fight with everything we have and with conviction. Pikes Peak is not easy to conquer, that we know. It all boils down to Sunday and I know that I can count on my team’s motivation and hard work." Raphaël Astier on the right pace… For his debut at Pikes Peak,

Raphaël Astier is having a positive learning experience. Fourth in the Time Attack 1 category qualifying session and third in the middle section practice, the 25-year-old Frenchman discovered the top sector of the mountain on Friday. Driving the No. 19 Porsche 911 GT3 Cup, he signed the second fastest time in class after his two runs. "Practice went well. We were able to optimize the engine settings and I got more comfortable in the car" explains Raphaël. "This sector is definitely the most complicated with blind corners and bumps everywhere. You have to let yourself go ! It’s an all new environment for me, and I’m learning a lot, like running on slicks. The week has gone by quickly, and in the end the driving time is relatively short so everything is very condensed. I’m enjoying this discovery and I’m having a lot of fun. Gauging my performance is interesting against specialists of the mountain. Now, we will do everything we can to put all the sectors together and have a good race."

Romain Dumas’s team will take part in the Pikes Peak International Hill Climb for the fourth time on Sunday. Winner in the Pikes Peak Open class and Rookie of the race in 2012, Romain Dumas won the event overall in 2014, with the third fastest time in history. Vincent Beltoise, also entered by the team, won in the Time Attack 1 class. For the 100th anniversary of the Race to the Clouds, Romain Dumas will pilot the No. 30 Norma M20 RD Limited Spec-2016 specially designed for this race, while Raphaël Astier will compete in Time Attack 1 in the No. 19 Porsche 911 GT3 Cup.