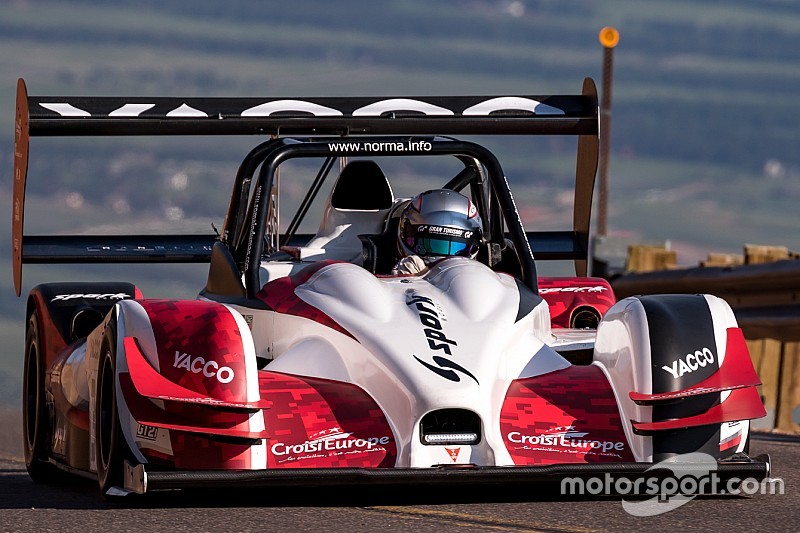 The French driver continued to work on the Norma M20 RD Limited Spec-2016 settings on the middle section of the mountain road.

After setting the fastest provisional time during qualifying, Romain Dumas continued on Thursday to prepare for the Pikes Peak International Hillclimb which will be held on Sunday June 26. While principal rivals did not improve on his time on the bottom section, the Alès, France native continued to work on the Norma M20 RD Limited Spec-2016 settings on the middle section of the mountain road, which features mostly hairpin turns.

While Romain Dumas already drove the car on this second sector of road on Tuesday, during optional tests, the mindset was very different this time. In the earlier test, the miles covered by the new Norma M20 RD Limited Spec-2016 were the first at high altitude for the car. But for Thursday, the 2014 winner was looking to optimise the prototype’s handling. Therefore, the day after his qualifying run on the bottom section – the fastest of the mountain – Romain took the opportunity to make adjustments on a slower portion of the course, featuring many hairpins and reaching an altitude of over 3400 meters.

...the electric prototypes didn’t improve on my pole time during qualifying.

Romain and his team, among other adjustments, improved the car’s agility and handling, looking to improve the car’s driveability with race day in mind. With four runs between Glen Cove and Devil’s Playground, the session was well-spent, as the driver of the No. 30 bested his 2014 times set on the same sector.

"These practice runs on the middle section were productive. We reviewed several avenues for set-up changes and we’re going according to schedule" explains Romain Dumas.

"Even though I already know the course, we were in a bit of a discovery phase on Tuesday. Today, we could take a step back, and had more time to work. Don’t forget that the car is relatively new and it’s a whole new challenge with four-wheel drive. So we focused on that point, on a very different section of the course from yesterday and that suits it well. We’re progressing well but we’re also discovering some new problem areas. Meanwhile, the electric prototypes didn’t improve on my pole time during qualifying. That’s good, but it also showed us that the gap is not that big and we can’t let anything go."

After the Unlimited class – of which Romain Dumas is included – and Time Attack 1 yesterday, competitors from Electric, Open Wheel and Time Attack 2 qualified on the bottom section of the road. While the French driver remains the provisional pole winner at 3 :34.552, his top rivals, including defending race winner Rhys Millen (two seconds adrift), are not far behind.

Romain Dumas will take part in the final practice session on Friday, on the top section which finishes at the 14,000 foot summit. It will be another busy day, this time on the most dizzying and bumpy section of the famous road.