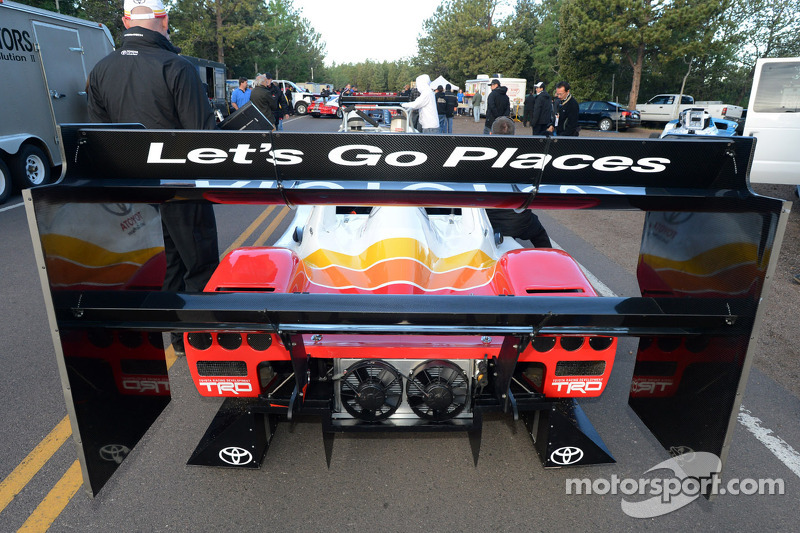 TRD and TMG are working together in an effort to set a new Electric Class record in 2013 with Rod Millen, who set an overall event record that stood for 13 years in 1994 in a Toyota Celica Turbo GT.

In this morning's final tune-up for the 91st running of the Pikes Peak International Hill Climb (June 30), the Toyota TMG EV P002 electric race car and driver Rod Millen ran a time of two and a half minutes (2:32.200) on the middle portion of the 12.42-mile, 156-turn course -- from Glen Cove to Devil's Playground, approximately three miles in length. 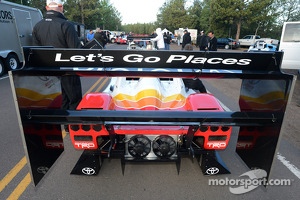 TRD, U.S.A. (Toyota Racing Development) is overseeing competition efforts for the Toyota TMG EV P002, which set the Electric Class record in 2012 with driver Fumio Nutahara (10:15.380). The electric race car has been significantly upgraded by TRD in Salisbury, N.C., after TOYOTA Motorsport GmbH (TMG) made enhancements to the electric powertrain in Germany.

TRD and TMG are working together in an effort to set a new Electric Class record in 2013 with Millen, who set an overall event record that stood for 13 years in 1994 in a Toyota Celica Turbo GT.

Are you happy with the progress of the Toyota electric race car? "I'm very pleased. I'm not only impressed with the technical advantage of the electric car, but I'm really impressed with the TRD (Toyota Racing Development) and TMG (TOYOTA Motorsport GmbH) folks -- how they've worked so hard together.

This is a very challenging task. We've got lots of good competition here and we've driven the car with zero failures -- without anything going wrong. The team has worked really well together and I just think that's fabulous."

What was the focus of today's final practice session? "Today, we were perhaps more focused on a race setup and we sacrificed a little bit of ultimate speed. The last three runs today, we ran the setup that we're going to run on race day. We're pretty pleased about that."

How has the Pikes Peak course change with the paving? "You would naturally think it's the same road and it's just paved, but it's more than that. Keep in mind, I was good and practiced at all my braking and cornering spots on the gravel and those have changed. So, now I've got to reteach myself those new spots where I brake and how I go around some of those corners.

And some of those corners have changed strangely enough because we have this ribbon of pavement going up the road. Before we had a much wider gravel road and there was some corners that I could sort of partly straight line and carry more speed.

Now, I've got to go around following the ribbon of pavement, so it's created a few corners that have sort of -- I've gained a little more respect for them. In the past, I sort of blew them off.

I could just power through those ones, whereas now, 'Uh oh, that one's a corner I've got to get around as well.' There's been some of those little, subtle changes and coupled with the unique driving experience in the electric car -- it's a whole new event for me now. I wish I would have done this in an electric car 30-odd years ago."

Do those factors make this year's event more of a challenge? "It is. I love that. I love the challenge. I love working with all the engineers -- all of us working together to try to gain more speed out of the car. That throughout my career has been one of the things I've enjoyed the most because we all learn a bunch."

How did today's final practice session help prepare the team for race conditions? "The road surface was definitely the warmest it's been all day right at the end of the practice session and the closest it's going to be race day.

Very happy that Rod (Millen) set his quickest time on the last run -- we had reduced power because we had run the car so much, the temperatures were quite high and we also had old tires on the car -- so very pleased with setting our fastest time on that last run.

Rod's very happy with the car, we have a little bit of high speed understeer, which is good -- it gives him confidence that the car is not going to snap on him at a high speed. We still need to work on corner exit traction. We've got a couple more things to help that for race day. We're going to make a couple of minor tweaks, but other than that we're ready to go."

What tire will you use for the race? "We have made a decision on tires. We tried the softer option tire in the beginning and it was very good on short runs. That tire gave us some time benefit, but unfortunately it was just not going to be able to stand the entire race distance.

It was going to overheat and go off performance-wise, so we're committed now to our harder option tire. Rod (Millen) is still very happy with those. The car is still well balanced and we'll have confidence that we'll have good grip all the way to the finish line. We've got good wear and the temperatures are under control -- so happy with that choice."

What did you work on today? "The mountain -- this is a really unique event -- the scale of the place, the timing of everything. One of the things that we did today that is different for example is we did just back-to-back, consecutive runs without taking a break in between.

That allowed Rod (Millen) to just drive the car while the previous run was still fresh in his mind and he was kind of still in the groove -- and I think it helped his confidence and just got him even more comfortable."

Are you eager to race on Sunday? "I'm excited. This is fun. Earlier today, I ran into an old friend from racing way back when and he was asking me about when I might retire and I looked at him and said, 'I'm not sure that I'll ever be ready to retire because racing is so much fun.'

It's like I never had to grow up. This is awesome. This event is fun and different because there's nothing else like it.