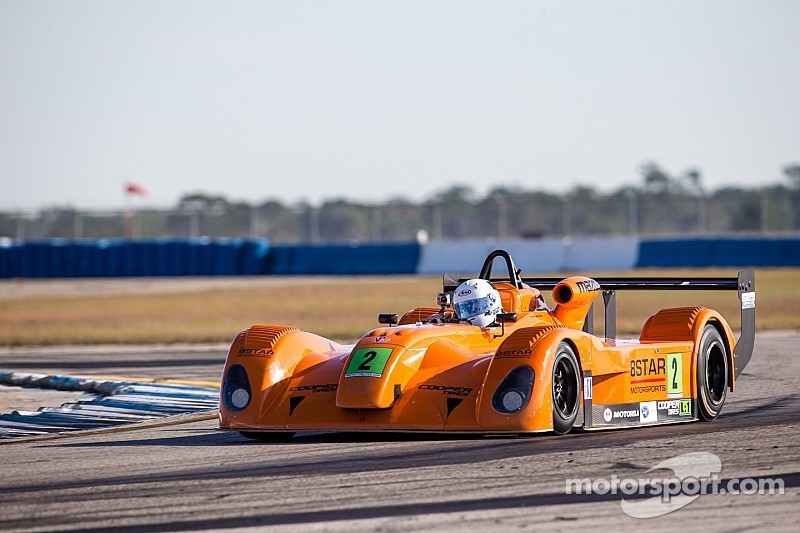 Remo Ruscitti dominates in a car he piloted for the first time during a pre-event test earlier in the week.

The victories were delivered by 8Star’s newest recruit and IMSA Lites debutant Remo Ruscitti, who was untouchable in a car he piloted for the first time during a pre-event test earlier in the week.

8Star regular Christian Potolicchio, meanwhile, achieved a great podium finish from seventh on the grid in race one and battled his way to fifth spot in treacherous conditions during the weekend’s second encounter to collect a strong points haul for himself and the team.

The results were then crowned by 8Star’s third driver, Lamont Harris spraying the champagne in celebration of another Masters class victory in the first of two races on the Ontario circuit for the TUDOR United SportsCar Championship’s feeder series.

After a reasonable qualifying that saw Vancouver’s Ruscitti line up sixth, he demonstrated supreme racecraft on the formidable Canadian Tire Motorsport Park circuit, which has a reputation for rewarding bravery with an ultra-fast, undulating layout and close guard rails that leave little room for error.

Not that Ruscitti made any. Faultless displays in the dry in race one and a rain-soaked second race, where the 20-year old lapped the 3.95km track two seconds quicker than his nearest rivals, resulted in a brace of dominant IMSA Lites wins to compliment a superb victory in the Continental Tires Sportscar Challenge and cap off an unforgettable weekend for the Canadian hotshot.

“It has been a great weekend and to achieve three wins – two in IMSA Lites – is really unexpected, as I only tested the Lites car for the first time earlier in the week,” said Ruscitti. “Conditions were tricky today (Sunday 13 July), but I had a great opening lap and passed no fewer than 15 cars to take the lead. Other than one yellow-flag period, I had no issues and simply had to hold it together at the front.”

Potolicchio, satisfied with his third place finish, felt slightly disappointed not to follow it up with another podium in race two, saying: “I’m happy with the weekend and coming from seventh on the grid to third place in race one was good. The second race was very difficult, as I have only ever driven in wet conditions once before. I passed a couple of cars and was doing well until the rain intensified, making it was difficult to get to grips with the conditions. Taking everything into consideration, fifth place is a good finish.”

Rightly thrilled with his Masters class win, Harris was deflated as he left Canadian Tire Motorsport Park having failed to make the start of race two after problems on the out-lap sidelined him.

He said: “I was pleased to have taken the Masters win in the first race but I lost it and hit the wall on the out-lap, which is less than ideal. The conditions were really slippery and trying to get the tyres up to temperature caught me out.”

8Star Motorsports Team Manager, Gary Neal, said: “The race wins has been coming for a while now, but one thing or another has always happened to prevent the team from capitalizing on its position. This time around we put everything together, had a perfect car and delivered a perfect performance, with all of our drivers achieving some success this weekend.”

The Pompano Beach-based 8Star Motorsports outfit will return to the track for the Brickyard Grand Prix – the next round of the 2014 TUDOR United SportsCar Championship – at Indianapolis Motor Speedway (24-25 July), while the Cooper Tires Prototype Lites Championship will resume at Road America (9-10 August).