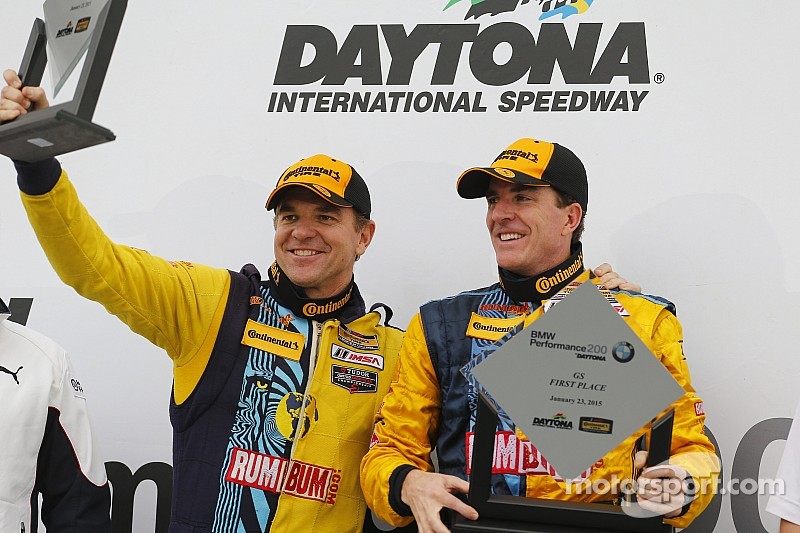 Daytona Beach, Fla. – It was a familiar sight for fans of Luis Bacardi’s hometown team at Daytona International Speedway, as brothers Matt and Hugh Plumb delivered Rum Bum Racing its third victory at the 3.56-mile road course. The result kicked off the 2015 IMSA Continental SportsCar Challenge in a big way for the championship winning organization who won back-to-back championships in 2012 & 2013.

“Our boss Mr. Bacardi puts so much faith in us, so much trust in us, making this plan work,” said Matt Plumb, who also serves as Rum Bum Racing’s Team Manager. “We had a rough season last year, and he stuck with us. We’re just so glad we could win this for him.”

We’ve raced together for a long time but I’ve never, ever seen him drive that well.

Hugh Plumb opened the 2.5-hour race at the iconic track from the front row after a strong qualifying run on Thursday. In an effort to err on the side of caution as the GS class field funneled down into Turn 1, the No. 13 Rum Bum Racing Porsche slipped to fourth in line.

While maintaining the focus of keeping the car out of trouble through the opening stint, Hugh Plumb carefully worked his way up to the top spot as he led the field for 20 laps before pitting under green to hand the car over to his brother Matt.

Matt Plumb returned to the order with just over an hour and 20 minutes remaining in the race and ran fifth in line. It wasn’t long before he had maneuvered the No. 13 Rum Bum Racing Porsche back up into the second spot as he chased down the leader.

Once the leader took to pit lane, Plumb took over the race lead until a full course caution was displayed with 58 minutes remaining. Crew Chief Joe Varde made the call to bring the car to pit lane under the yellow for fuel and right side tires.

When the race when back to green with 43 minutes to go, Matt Plumb restarted fourth and once again made his way forward as he ran second with half an hour remaining. He spent several laps sandwiched between the V8s of the Mustang and Camaro as the top-four cars battled for the point position.

As the race entered its final stages, a light sprinkle began to fall around the Daytona circuit and Matt Plumb, who enjoys racing in the tricky conditions that come with the rain, used that to his advantage as he utilized the draft on the Daytona high banks to once gain regain the race lead with just over 20 minutes to go.

He never looked back, eventually extending his winning margin to nearly seven seconds.

“What an unbelievable stint he put together,” said Hugh Plumb of his brother’s run to the checkered flag. “We’ve raced together for a long time but I’ve never, ever seen him drive that well. He is a very talented driver. It’s great to be a part of this Rum Bum Racing team. Luis Bacardi, Rum Bum, the whole team, make this happen. I couldn’t be more pleased.”

The win was all the more special for Matt and Hugh Plumb, who celebrated together in victory lane for the first time since 2008 and were eager to share the news with their mom at home as she is convalescing from routine surgery.

“Having to do this week in and week out with Hugh being on another team for so long, to be able to join together as a team is very special,” said Matt Plumb. “It’s not a typical brotherly relationship, it’s very professional. He does a good job and he makes me want to do a good job.

“I think certainly with the Porsche the top speed at the end of the straightaway helps us a little bit but we
have to be in clean air and we have to be out in front so it’s really the crew’s responsibility for our success,” added Matt Plumb. “If I had been stuck in traffic, it would have been very difficult for me to keep moving forward. Hugh with an amazing driver handoff made it so much easier.

The biggest plus for us today was toward the end of the race when it started to sprinkle. It was just enough to make the driving conditions a little tricky. As soon as that happened, I knew we were golden. Our car has always been very good in the wet and I very much enjoy driving in the rain.”

The IMSA Continental Tire SportsCar Challenge sees a six week break in race action before heading to Sebring International Raceway for Round 2 of the Championship.