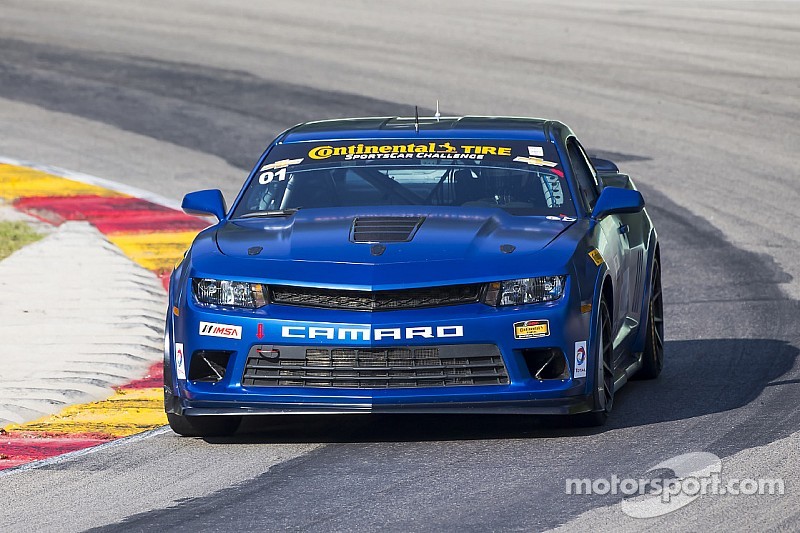 On a sun-splashed Saturday afternoon at Road America, good fortune shined on Lawson Aschenbach, who grabbed the lead when Pierre Kleinubing’s car sputtered about a third of a mile from the finish line and went on to win Round 9 of the Continental Tire SportsCar Challenge at Road America.

“I think I was screaming on the radio as I crossed the finish line, ‘We just won this race,’” said Aschenbach, who co-drove the CKS Autosport Camaro Z/28.R with Eric Curran.

It did not look as if the day would end for Aschenbach and Curran on the top step of the podium. The two-hour, 30-minute race was slowed by a number of yellow flags, the last of which grouped the field behind Kleinubing with just minutes remaining.

When the race was green-flagged for a final lap dash to the finish, Kleinubing and Aschenbach ran by side-by-side through a number of Road America’s 14 turns. While exiting the final turn, Kleinubing, who shared the driving duties in the No. 76 Compass360 Racing Suburu WRX STI with Ray Mason, slowed and pulled to the right-hand side of the straightaway up the hill.

“Something happened in the drivetrain, the rear differential,” said Kleinubing, who settled for third place. “The wheels were just spinning. I had nothing.”

Aschenbach sped past and was followed by Robin Liddell, who climbed back from 16th place, the result of a penalty for speeding in pit lane, to finish second.

“I think (second place) tells you how angry I was about the penalty,” said Liddell, who co-drove the No. 6 Stevenson Motorsports Camaro Z/28.R with Andrew Davis. “I was so angry … I got up as far up the grid as fast as possible.”

The Street Tuner class was won by Terry Borcheller and Mike LaMarra in the No. 23 Burton Racing BMW 128i.

“We’ve struggled all year, but I kind of had the feeling (of a good race) in practice,” said Borcheller. “It felt like the car was so good. We hit it so good, the set-up, the power and Mike’s opening stint in the car.”