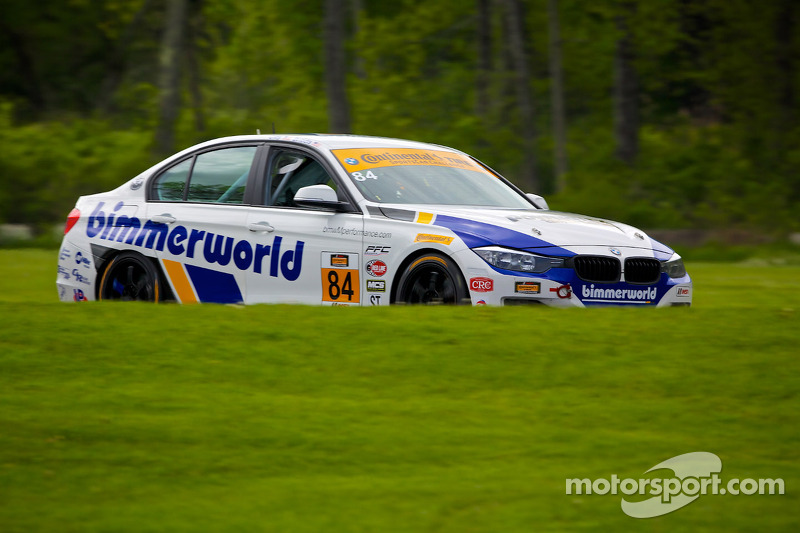 Tensions are mounting at BimmerWorld, the veteran Continental Tire Series team, after contesting its fourth consecutive event where the rules make reaching the podium with one of its four BMW 328is little more than a fantasy.

Known for its fast and highly developed BMW sedans in IMSA’s Street Tuner class, BimmerWorld, along with the other BMW teams in the series, finds itself unable to break the stranglehold of the current rules, much less win a race, due to the current Balance of Performance inequities.

Left once again to fight for a best finish of fifth—behind the other marques, BimmerWorld’s drivers watched as Honda Civics and Porsche Caymans ruled the Kansas "roval," a slight change from the three previous rounds where the Mazda MX-5s dominated each race.

BimmerWorld ended the 2hr30min race with two cars inside the top-10, but team owner/driver James Clay was in no mood to celebrate eighth- and ninth-place finishes by the Nos. 81 and 82 328is.

"I'm livid right now," he said. "We haven't gotten less smart; we haven't forgotten how to win; we haven’t forgotten how to be a championship caliber team. The other cars have been getting breaks and gifts for years and we’re basically stuck in 2010. We're on the same restrictor as 2010, we've had more weight added since then, and keep getting slowed down to the point of being uncompetitive."

Through the inconsistencies of the four most recent winners, BimmerWorld’s No. 81, with drivers Greg Liefooghe and Tyler Cooke, find themselves leading the ST points standings after Kansas, but as Clay explains, it won’t last if the rules for the BMW 328i remain the same.

"Oddly enough, we're barely able to get inside the top-10, but we're leading the points because we're more consistent than the cars that take turns winning," he added. "Our cars are almost a full second off of the pace in this race, and we’re having to do some pretty wild things with race strategy and take a lot of gambles to get to where we end up, while the other cars just go about their races with no concerns. We’re almost at the halfway point of the season, enough is enough, and we’d like the same opportunity."

Liefooghe, who turned in another flawless performance to earn eighth with Cooke, echoed Clay’s sentiments. "One of the only positives is we're now leading the points, but that's out of consistency more than anything," he said. "We've just been consistent because that’s all we can be right now. It has been frustrating because we're not gaining speed like the other cars. We're just fighting to get a top-10."

Kansas saw the debut of Eric Zimmermann in the No. 80 BimmerWorld BMW with teammate and rising star Corey Fergus mentoring the BimmerWorld Driver Development program graduate during the event.

"I'm still standing and that was the primary goal for the weekend," Zimmermann said with a laugh. "I ended up in the car for most of the race because of how the yellows fell. Our pro Corey only got 40 minutes or so which was unexpected. It wasn't quite as overwhelming as I expected. The quality of drivers is higher than what I've faced and it was a great learning experience. It was great to meet Corey, who is a consummate pro and great teacher."