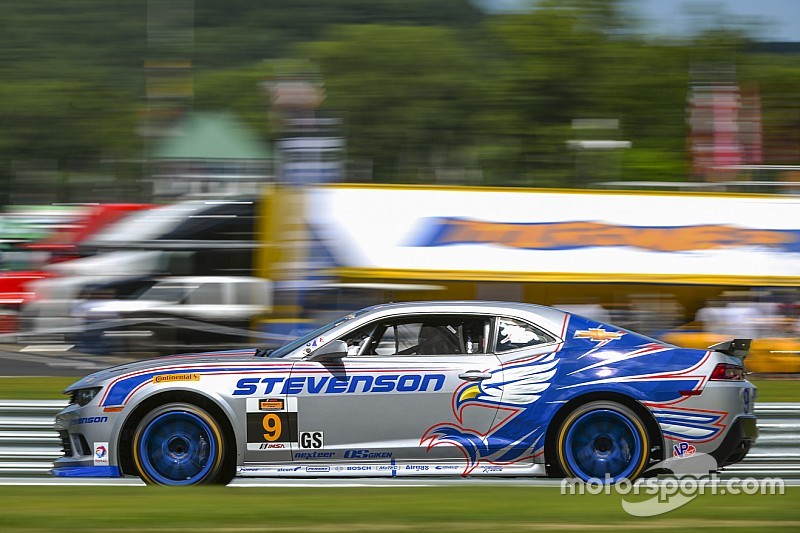 Lakeville, Conn.  – The two Chevrolet Camaro Z/28.Rs from Stevenson Motorsports finished fourth and fifth in Saturday’s sixth round of the Continental Tire SportsCar Challenge as Chevy remained first in the series’ Grand Sport (GS) Manufacturer championship. With a fourth-place finish, Andrew Davis and Robin Liddell in Stevenson Motorsports’ No. 6 Chevrolet Camaro Z/28.R increased their points lead in the GS Driver’s standings with four rounds left in the season.

Matt Bell and Lawson Aschenbach in the Stevenson Motorsports No. 9 Camaro Z/28.R were a spot behind as contact hindered chances at winning for both cars.

We got caught up in our own bad luck with both cars.

“Today was a typical Lime Rock race,” said Jim Lutz, Chevrolet Program Manager for the Camaro Z/28.R. “We all knew that traffic would play a significant role in the outcome. Unfortunately the close-quarters nature of the track hurt our Chevy Camaro Z/28.R teams more than it helped. We still managed to score enough points to keep our lead in the Manufacturer standings, as did Stevenson Motorsports in the Driver and Team race. We will be back and ready to fight for another victory in two weeks at Road America.”

Bell started from pole and led all but nine minutes of his nearly hour-long stint. Davis had been running second but had to serve a drive-through penalty after contact with another GS car early in the race. The penalty dropped the No. 6 Camaro Z/28.R back to sixth before a late charge by Liddell gained two spots at the finish. The Davis/Liddell pairing were 0.212 seconds away from their sixth consecutive podium.

Meanwhile, Aschenbach was in the midst of a fight for the lead and potential victory when a slower car turned into him and spun the No. 9 Camaro Z/28.R off the track and down to sixth place. Aschenbach was able to regain one of the positions late in the race.

Mantella Autosport’s No. 80 MBRP Camaro Z/28.R of Martin Barkey and Kyle Marcelli finished sixth to continue their momentum from the previous race two weeks ago at Canadian Tire Motorsport Park.

The next race for the Continental Tire SportsCar Challenge is set for 1:20 p.m. ET on Saturday, Aug. 8 from Road America in Elkhart Lake, Wisconsin.

Andrew Davis, Stevenson Motorsports No. 6 Chevrolet Camaro Z/28.R – Finished fourth: The first part of the race was going pretty well. Once we started getting into traffic, you realize how big a battle it’s going to be. The ST cars were quick enough that they could give you trouble. I was able to gain some ground on Matt (Bell) and Hugh (Plumb) through some traffic. There was a big jam-up in Turn Two. I couldn’t see through the cars in front of me. As Hugh checked up, I unfortunately hit him. I feel horrible and certainly it was not intentional. I hate that it caused damage to their car and knocked them out of position.

At the same time I felt bad for our guys because we had to serve a drive-through penalty. It wasn’t anything intentional that I was doing. I just wasn’t able to slow in time before I made contact. I hate it for the guys because they work really hard, and I never like damaging our Stevenson Camaro. Robin did a good job and we were able to fight back to fourth. We still salvaged what we could for the day. In reality, we came out of the race with good points and a good finish. It knocks off our podium streak but it just wasn’t the race for us. I’m proud of the team and Team Chevy. The Camaro Z/28.R still ran well so we’ll move on to the next race.”

Matt Bell, Stevenson Motorsports No. 9 Chevrolet Camaro Z/28.R – Finished fifth: “It was a good run by the whole team. We got caught up in our own bad luck with both cars. We missed the mark a little bit on the setup, which is confusing. It’s difficult when you have this many cars on such a small track. (The No. 13) was fast on one end of the track and I was faster on the other end. It just kind of played out that way. He made a little mistake coming off the final corner, and unfortunately for him that was his fast end of the track. I got by him there and held him off in his fastest part, and we were back up where I felt where we belonged. The track got really greasy really fast.

So the setup that was really good for pole position wasn’t necessarily good for the race. The tires burned off pretty quick and I had understeer that I didn’t have in qualifying. We just had both ends of the car not working together. We’ll learn from it, we’ll look at data and we’ll go into the next couple events knowing how to fix that problem. A huge thanks to the team and huge thanks to Team Chevy. They did a great job and worked super hard all weekend. It’s a short weekend, but it’s so condensed, and they’re working harder than anybody. I hope I can get one more pole out of this season and change my luck from losing from pole every single time to maybe winning one.”

Lawson Aschenbach, Stevenson Motorsports No. 9 Chevrolet Camaro Z/28.R – Finished fifth: “It was just not our day. It was looking good at the start. Matt did a great job and we got some fortunate with some stuff happening behind him and built a big lead. From that point, everything went rough for us. We had a slow pit stop that lost us our lead. Then when we were battling, a backmarker ST car with no awareness came down on me and pushed me off the track.

That was it for us. It’s a frustrating way to end. I have to say thanks to everyone at Stevenson Motorsports. The Chevy Camaro Z/28.R was fast. Something may have gotten out of whack during the hit. For all the problems we had, to come out of here with fifth is something to be fairly happy with. We definitely let one slip through our fingers today. It’s just been sort of frustrating all year. We’ve been one of the fastest cars - if not the fastest - and we just can’t close it out. We’ll keep fighting and get one sooner or later.”