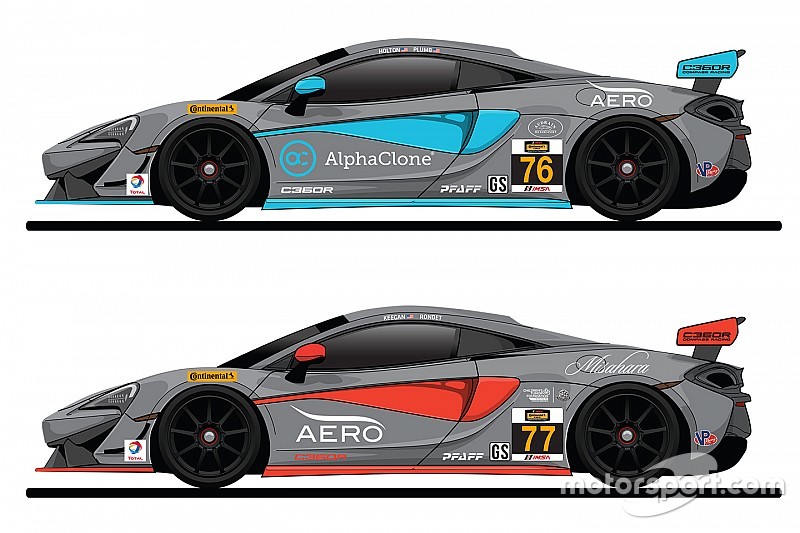 Toronto, Canada — After three seasons fielding a diverse group of cars in the Continental Tire SportsCar Challenge and the WeatherTech SportsCar Championship, long-time IMSA competitor C360R announced today the launch of their new two-car GS program for 2017. With the unveiling of this effort, the team becomes the second to publicly announce the introduction of McLaren’s new 570S GT4 car to the series.

“We are beyond thrilled to release details of a program that has been in the works for some time,” enthused Team Principal Karl Thomson. “I first visited the McLaren Automotive factory and their McLaren GT facility in June of 2015, and was immediately impressed with the quality of the incredible cars being built there. Over the following months we kept in touch, and when they launched their new GT4 car earlier this year, it was a natural fit for our team.”

IMSA’s Technical Department has spent the past year analyzing the globally-recognized GT4 homologation, and announced earlier in the season its adoption as the future of the GS class. This smartly brings the series in line with a number of sanctioning bodies and series around the world that recognize GT4.

“After working last year with Ford on the GS Mustang program, it was clear to everyone that GT4 was the logical next step,” remarked Technical Director Ray Lee. “We really enjoyed working with the guys at Ford Performance and Multimatic Motorsports, who were great partners all season long. It was amazing to be part of that factory program and to have Ford win the Manufacturer’s Championship last year. We’re keen to see our McLarens compete with their new GT4 Mustang."

Prior to the 2016 Mustang effort, the team ran a Subaru WRX STi in GS for two seasons (2014/15), with a podium finish at Road America being its best result. They also fielded an Audi R8 LMS in the GTD category in 2015, giving C360R valuable insight on the operation of a top-level GT3-style car and helping Audi take second place in the Manufacturer’s Championship.

“We’re very pleased to welcome a team of C360R’s stature to the McLaren family,” noted McLaren GT Managing Director Andrew Kirkaldy. “They’ve had great success over many years in IMSA, and we look forward to working together with them to continue that legacy.”

Along with the introduction of a new manufacturer, C360R is also proud to announce a new commercial partnership with AlphaClone, a San-Francisco based registered investment advisor and equity research firm that is a pioneer in leveraging technology to build accessible alpha-seeking investment strategies. The firm’s proven active indexing approach is reinventing the way individual investors access the investment ideas of the world’s most established hedge funds.

We will all miss Rum Bum, but I am back and incredibly grateful to C360R for including me in their future.

Long-time IMSA competitor Matt Plumb will be paired with Paul Holton – who returns for his third year with the squad – in the No.76 AlphaClone McLaren. “The team at AlphaClone and I are really excited about our new partnership with Paul, Matt and the C360R team,” said Maz Jadallah, AlphaClone’s CEO and Founder. “Similar to sportscar racing, leveraging technology to achieve high performance while managing risk is at the heart of our process. In addition, this is a great opportunity for us to connect with potential clients and partners, and we are looking forward to being part of the IMSA paddock.”

Plumb was equally enthusiastic. “I could not be happier to be a part of this deal. I have known Ray, Karl and the C360R guys as competitors forever. They are a fantastic group who have shown speed and ability to run up front for years. This, combined with my co-driver Paul who has shown incredible talent in the last few years of Conti should give us a real shot at winning some races and fighting for the championship. It is a bittersweet move for me as I have had an amazing home in this series for many years, and I’m really thankful to the Bacardis for that. We will all miss Rum Bum, but I am back and incredibly grateful to C360R for including me in their future.”

The team’s second 570S GT4 – No.77 – will be helmed by race-winning Ferrari Challenge driver Mathew Keegan and Nico Rondet (Sim Raceway’s Chief Instructor at Sonoma) with support from technical partner AERO Advanced Paint Technology, who return for their third season. The liveries of both McLarens will be rendered using AERO’s proprietary paint technology, which offers lightness, durability and ease-of-application that traditional paint simply can’t match.

“C360R has given me a great opportunity to step up to the next level of competition from Ferrari Challenge, and I’m really looking forward to working with Nico to get the most out of our McLaren,” noted Keegan. “It’s an absolutely amazing car and I can’t wait for Daytona!”

New York's established fine jewelry house, Misahara, comes on board with sponsorship for the No.77 car, whilst Audrain Motorsport will support No.76. And, building on a relationship forged over the past few years with the team’s Street Tuner-class Audi S3 effort, Pfaff Automotive – Canada’s exclusive McLaren retailer – extends their support to the 570S GT4 program on both cars.

As announced previously, the team welcomes a new charity partner for 2017, in the form of The Race Day Foundation. “We’re so very proud to welcome the kids with medical challenges and their families that Race Day brings to the track,” said Thomson. “We’re pleased to help offer a day away to create powerful memories that offer hope and inspiration for a family at a time when they need it most.”

The introduction of new cars and new sponsors are proof-positive that all eyes are on IMSA and the Continental Tire SportsCar Challenge. “Companies understand that sportscar racing offers a unique environment for activation, partner rewards and business opportunities,” continued Thomson. “A day at the track is so much more exciting than a game of golf, and we can get their people really immersed in the action, involving teamwork, strategy and true grit."

The team will be at Daytona International Speedway for the ROAR, January 6-8.