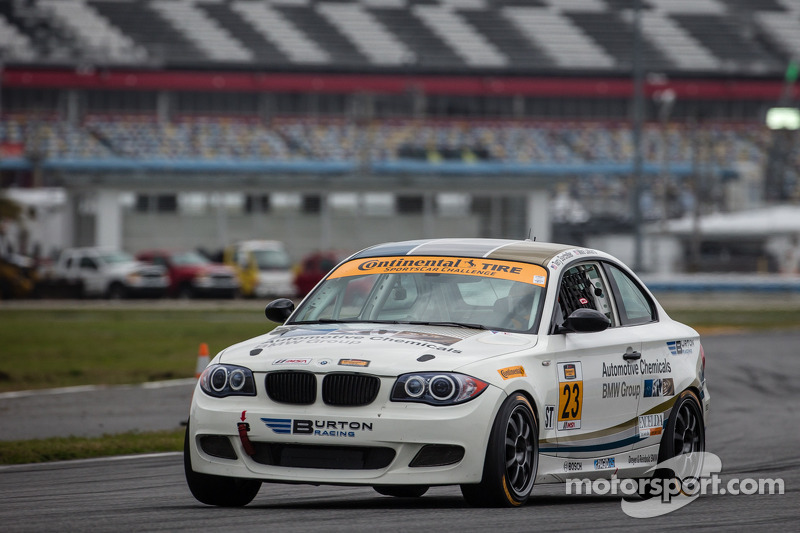 Mike LaMarra and Terry Borcheller led the team charge in the No. 23 BMW Chemicals/Excelda BMW 128i with a sixth place finish, while Burton Racing teammates Greg Strelzoff and Connor Bloum took seventh in the sister No. 22 Gold Eagle BMW 128i. 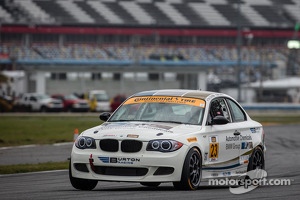 The result marked the best team finish for Burton Racing at Daytona International Speedway as the team opens the 2014 IMSA championship with some positive momentum.

In a race that saw five full-course caution periods which slowed the field for a significant portion of the race, Burton Racing made the most of the green flag laps to move through the 68-car combined class field.

LaMarra and Strelzoff opened the race from the seventh row and ran in tandem at the drop of the green flag with Strelzoff slotting into 14th and LaMarra following in 15th. The first of the five cautions was displayed just 10 minutes into the race, but once back to green, the Burton Racing duo continued to click off quick and consistent lap times with LaMarra moving into the top-10 and Strelzoff running as high as 12th.

The team took advantage of the second full course caution of the race to pit both BMW machines during the yellow as both Burton cars took on new tires, a full load of fuel, and executed clean driver changes.

Sportscar veteran Borcheller took over control of the No. 23 BMW Chemicals/Excelda BMW 128i, while Bloum strapped into the No. 22 Gold Eagle BMW 128i.

Once again the Burton Racing drivers masterfully maximized the next green flag runs and progressed up the order to run in sixth and seventh with less than 15 minutes remaining in the race. The chance to make a final push for a top ten was halted as the fifth and final full-course caution was displayed with just 11 minutes remaining, with the next flag being the checkered as the group took a well-earned double top-10 finish.

“It’s definitely a better place to start the championship than last year at Daytona,” said Team Owner Keith Burton. “Both of the cars are in one piece with no blown engines and it is a really nice spot to be in. That was our goal, to have two cars in the top-10 and not have to play catch up early in the year. I am really happy for Connor (Bloum) and Greg (Strelzoff) in the No. 22 car, they had a really great race. And to finish with the two cars right in front of each other in sixth and seventh it is just a testament to the hard work on the part of the whole team. Both of the cars are close with the engineering and everything and that is nice, it feels really good.”

Burton Racing will look to build on the positive start to the season with another strong outing as the team next travels to Sebring International Raceway on March 13-14 for Round 2 of the championship.

Mike LaMarra, No. 23 BMW Chemicals/Excelda BMW 128i: “My stint was great and the start was really good. I was able to make up a few positions. Plus there weren’t any problems, so that was really good and we were running tight for a while which was really good. I got a nice draft off of the No. 22 car which moved us up a bit in position. But once those front cars started running together I just couldn’t quite catch up because the Porsches are a little faster on the straightaway. So a Porsche in front of me would pull away and I would catch his draft and then catch him in the infield and do it again. I would have liked to have had that draft a little longer, but it worked out well. There were a lot of really long cautions in the race which was difficult, but the car was great.”

Terry Borcheller, No. 23 BMW Chemicals/Excelda BMW 128i: “Today was a really good, mostly drama-free day. Our guys did a great job with the car, it handled really well. We are really lacking on top speed here at Daytona and I just hope that isn’t the case at other tracks, I don’t think it will be. But it was a fairly uneventful race for me, just trying to stay out of trouble. There were some things that happened around me, but they were all far enough away that they really didn’t impact our race at all. There wasn’t much green running in the race today, which made it kind of tough to make up any time, but we made it up when we needed to.”

Greg Strolzoff, No. 22 Gold Eagle BMW 128i: “My stint felt amazing. The car was just great. The whole Burton Racing crew did a really great job of putting the car together and it’s great to have both cars in the top-10. I wish there could have been a little less yellow and we could have gone racing there at the end, but sometimes that’s just how it happens and overall today was great.”

Connor Bloum, No. 22 Gold Eagle BMW 128i: “Today’s race was an awesome start to the season. We ran into a few issues at the beginning of the race with the radio not working. But we came out with a solid finish and I am really looking forward to Sebring. The car felt really awesome and this team is such a great place to be. I’m just really excited.”

Did you know? Youngest and oldest drivers at Le Mans?