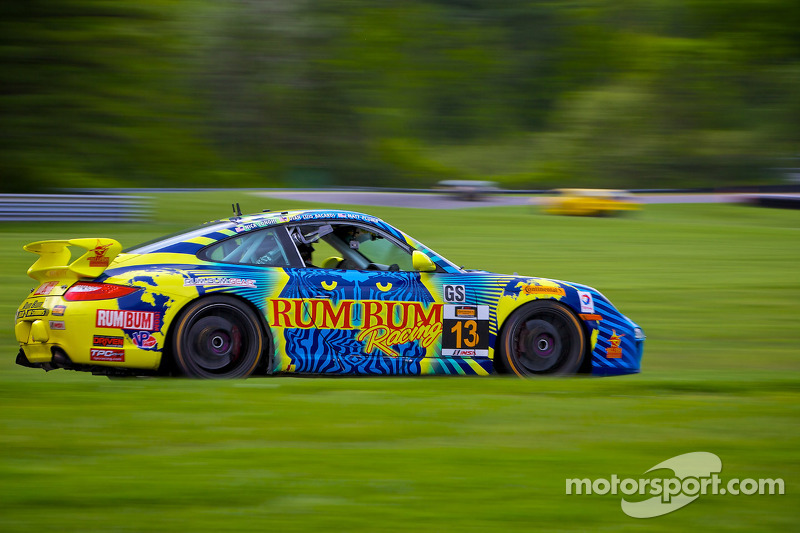 Kansas City, Kan. – The Rum Bum Racing No. 13 Porsche will start the Grand Prix of Kansas from the front row of the grid following Friday night’s 15-minute qualifying session which saw Nick Longhi turn a fast lap of 1:22.124-seconds and claim the second starting position. Longhi will open the 2.5-hour IMSA Continental Tire SportsCar Challenge race on the Kansas Speedway ‘roval’ before handing the controls over to co-driver Matt Plumb as the duo targets a run to Kansas victory lane.

The No. 13 Porsche rolled off of the trailer and was immediately quick as the team posted the third quickest time during the first practice held under warm and sunny track conditions. The Rum Bum squad worked to perfect the car through two one-hour practices ahead of qualifying.

Cooler track conditions welcomed the night time qualifying run as the session was held under the Kansas Speedway lights. Longhi completed just three laps during the session and set the provisional pole time on his very first hot lap.. He appeared well on his way to bettering that quick lap time until the No. 13 Porsche got loose and brushed the wall. The veteran sportscar racer’s experience at the wheel was on full display when Longhi managed to keep the car from spinning and returned it to pit road. The car remained stationary on pit lane for the remainder of the session but Longhi’s first flying fast lap was enough to secure second on the 52-car combined class grid.

“The conditions were going faster and when you’re going faster, you’re on the edge,” said Longhi of the run. “It was a good lap most of the way. I’m pretty sure we would of had the pole from what our timing looked like, but ¾ of the way through the oval, the car moved up a little bit. For the car to be fast on an oval in qualifying it has to be a little loose – the set up was right for the conditions. It just got super greasy right when I came off the corner and the wall just kind of knocked it straight and was enough for me to have to get out of the throttle. But we’re fine, we’re good for the race. It was just one of those things where it was a P1 but we’ll settle for a P2.”

Currently third in the team championship standings after their win in the previous event at Lime Rock Park, Rum Bum Racing’s championship-winning goal remains the same and the team aims to gain even more ground this weekend with another positive performance in Kansas.

Without another practice scheduled for the weekend, Rum Bum Racing will go straight into race action Saturday night at 6:15 PM CT.