CTSCC: One last shot at redemption at Road Atlanta for CJ Wilson Racing 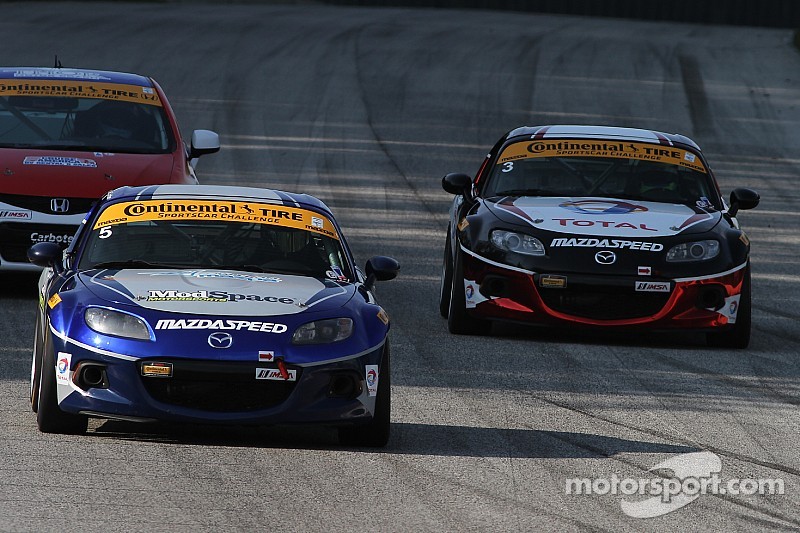 The 2014 Continental SportsCar Challenge has been tough and winless for CJ Wilson Racing. Friday's race at Road Atlanta offers one more shot at victory.

For the drivers and crew of CJ Wilson's Continental Tire SportsCar Challenge team the 2014 season has truly been just that, a challenging test of nerve, skill and patience. The fortunes of both Mazda MX-5s have fluctuated dramatically throughout the year with a collection of pole positions, exciting race battles, extreme temperatures, dramatic charges through the field and, for Marc Miller, one enormous accident. Both cars have seen the podium on multiple occasions but neither the #3 or the #5 car managed to capture the top step. With one race left in 2014, the focus on victory lane has never been sharper.

The 2.54 mile, 12-turn layout poses a number of challenges for the MX-5 platform with the long back straight being the most significant one. With rain in the forecast for race day, the team is not ruling out finishing the season in real style.

This is our last shot and it's pretty much a 'Hail Mary' anything goes.

Team Manager Andris Laivins is anxious to right some wrongs at this track. "Road Atlanta hasn't been too kind to our team the last couple of years. Mechanical issues soured CJWR's first visit, and last year we gambled on strategy and lost with a long caution at the end. This year we feel it owes us a little something after such a rollercoaster season. Our Mazdas' pace has been promising in testing, so we plan to be in the hunt on Friday afternoon with both cars."

Stevan McAleer would not object to racing his #5 ModSpace car in less than optimal conditions. "With the wet weather coming tomorrow, if we can dial in the handling a wee bit, execute a good strategy with quick pit stops there is a good chance of us being on the podium."

McAleer's teammate in the #5 car, Chad McCumbee, feels like there is some unfinished business to address at Road Atlanta. "We've led a lot of laps this season and we've been the car to beat on multiple occasions. We're not in a championship battle right now but have shown enough to know we could and should have been. Really we need to get a solid finish here and bring some momentum into 2015."

Tyler McQuarrie is equally positive at the prospect of inclement weather on race day. "I think we are both in a position to end the season well, especially given the fact that we are expecting rain tomorrow." Running at Road Atlanta has it's own unique issues for McQuarrie who competes there every year in Formula D. "Every time I come into Turn 10, I think of my initiation point and then have to remind myself that I'm not supposed to brake right there and flick it into the corner!"

"This year has been very turbulent for us, mid-season we have had some flashes of brilliance." explained McQuarrie's partner, Marc Miller. "We do look positively at the season as we all feel we would have been in the championship hunt had circumstances been only slightly different. This is our last shot and it's pretty much a 'Hail Mary' anything goes. We can still finish strongly here and that is what we are shooting for."

Despite the fact that the team has yet to find victory lane this season, team owner CJ Wilson believes it has been an important and successful year for his Austin-based team. "The Petit weekend has been really great for us the last few years particularly with Stevan [McAleer] winning his MX-5 cup championship there.

Having both teams together means we're generally in a great mood in the paddock. Chad, Tyler, Marc and Stevan have all combined to set fastest laps, podiums, or set pole times which are great accomplishments. I'm very proud of the work the crew has been able to do to keep the cars competitive all year and I know Andris has had his hands full running both teams almost every weekend.

With all this year's success we are looking forward to more growth and increasing our performance as a team for 2015."

DTM-Super GT 'Class One' cars 'definitely' of interest to IMSA