Al Carter is going to help Jim Jonsin's effort to take Rebel Rock Racing to the next level.

Headquartered in Coconut Creek, Florida, the Rebel Rock Racing team founded by Grammy Award winner and music producer Jim Jonsin, is looking to use the 2014 season as a steppingstone to enter the club of the top CTSCC racing teams evolving in one of the most competitive endurance racing series in North America.

When he is not writing songs and producing music albums, working for his Rebel Rock record label, Jonsin is an active player in the motorsports industry where he manages his own Rebel Rock Racing team and drives his own race car since 2011.

Over the years, Jonsin has become one of the most in-demand writers and producers working in pop and urban music today, having written global hits for artists including Lil Wayne, Beyoncé, T.I., Souljaboy Tell Em, Usher and Jamie Foxx.

Two tracks co-written by Jonsin - Lil Wayne's "Lollipop" and T.I.'s "Whatever You Like" - collectively spent 13 weeks at the top of the 2009 Billboard Hot 100 chart, with "Lollipop" earning Jonsin the Grammy Award for Best Rap Song. 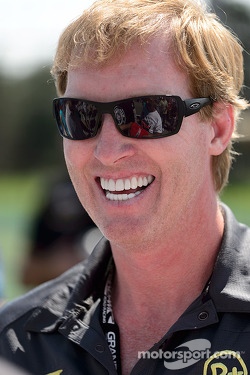 Photo by: SceneTap B+ Racing


2014 marks the arrival of Al Carter as a new Rebel Rock Racing partner. Carter, who shares a common passion for everything automotive and a true love for motorsports, is definitely going to help Jim Jonsin's effort to take the team to the next level. Rebel Rock Racing recently hired new key personnel and signed new drivers and sponsors for the 2014 program.

Starting this weekend at the Roar Before The Rolex 24 test days at Daytona International Speedway, Rebel Rock Racing will enter three Porsche race cars in the 2014 Continental Tire Sports Car Challenge series including two Porsche 997s in the GS class and one Porsche Cayman in the ST class. Jim Jonsin will be behind the wheel of his own racing No. 88 Porsche Cayman ST and will co-drive with Jarett Freeman.

Jonsin is really motivated and excited to show his new racing stable. "I'm proud to be a part of Rebel Rock Racing. I'm a race fan at heart and to actually be a partner and driver on a new team is so amazing and inspiring," announced team co-owner Jim Jonsin. "Our 2014 driver lineup is at the top level, and our management, engineers and crew are masterminds! Rebel Rock Racing is a Championship Team.... LET'S GO RACING!!!" continued Jonsin.

Jonsin's new teammate Jarett Freeman has been racing since 2009 and got the taste of his first CTSCC race in 2011 at Homestead Miami Speedway.

"Driving a Rebel Rock prepared car is truly a great opportunity for anyone," announced Jarett Freeman. "I am proud to be part of Jim Jonsin and his many accomplishments. Rebel Rock Racing has shown that they can compete with the best, and hopefully as a team we can showcase what we have for 2014!" said Freeman.

The No. 7 Rebel Rock Racing B+ Foundation / Eagle Technology Systems Porsche 997 entered in the GS class for 2014 will be co-driven by experienced racer Al Carter and young gun Brett Sandberg.

Al Carter has been racing with success in the Continental Tire Sports Car Challenge since 2010. Following three full seasons with Fall-Line Motorsports where the Greenville, Delaware driver scored one pole position, three podium finishes and led a total of 40 laps, Carter is really looking forward to the challenge to drive a new car with a new teammate.

"Our Rebel Rock man Jim Jonsin has had a busy off season," says Al Carter. "He's put together a pretty cool cast of characters for the 2014 Continental Tire series season. I'm pumped and excited to be driving with Brett Sandberg and partnered with this entire Rebel Rock Racing bunch. I am proud to announce our No. 7 Rebel Rock Racing B+ Foundation/ Eagle Technology Systems Porsche" announced Carter.

Sandberg is eager to start testing this weekend at Daytona. The racer from Allendale, New Jersey has great ambitions for his 2014 season with new co-driver Al Carter. "I am extremely excited to join Rebel Rock Racing and their new direction for what is to be a promising 2014 season," says Sandberg. "Joining this young program is going to present obstacles and adversity but I'm confident that we have put together a "badass" program that can compete at the top of its class. My teammate, Al Carter has evolved into a very fast and consistent driver and I am more than excited to be driving with him this year!" added Brett Sandberg.

"Joining the Rebel Rock MBRP Racing team is a real thrill for me," said Martin Barkey. "Coming from the Porsche Cup Challenge in 2013 it was my first choice to drive a Porsche in the Continental Tire Sports Car Challenge series. Jim Jonsin has clearly assembled a team that will contend for the Championship in 2014 with some of the best engineers, managers and crew members I have ever seen. I look forward to being a part of this team in 2014" announced Barkey.

Canada's Kyle Marcelli has established himself as a professional racing driver and one of North America's rising stars in professional sportscar racing across the globe. After a successful career in karts and single-seaters, Kyle made his rookie debut at the pinnacle of sportscar racing, the American Le Mans Series in 2010. Since then, Marcelli has built a reputation of being a consistent front-runner earning - six pole positions, six wins, eighteen podiums and seven fastest race laps in the prototype category. Marcelli is really pleased to join Rebel Rock Racing for 2014.

"I'm really excited to join Rebel Rock Racing MBRP team for the 2014 Continental Tire Sports Car Challenge season," says the young Canadian. "After a recent successful test, the team has proven that they have the desire and ability to be a winning team. I don't expect it will be easy, I know we're going to have to work hard to get the results. The CTSCC series has established itself as one of the most competitive championships and for that reason I'm eager to do well" continued Marcelli.


On the technical side, Rebel Rock Racing will be engineered by racing veteran Ron Mathis. Mathis brings decades of racing experience to Rebel Rock Racing. Over his 30 year professional career, Mathis won many major race and championship wins and led major factory competition programs with Audi, Dodge, Jaguar and Lotus as well as high-profile independent teams. Ron is particularly proud of his X-Prize winning Very Light Car which set multiple world's best efficiency standards before being retired to The Henry Ford Museum collection.

In parallel to his exciting three car racing effort, Jonsin has the plan to develop an interesting concept with a vision to unite the entertainment and motorsports industries. Rebel Rock Racing strives to bring a young and refreshing energy to the sport through exciting new programs, like Rock The Grid. Rock The Grid plans to bring a unique and creative festival experience celebrating the fusion between music and car racing.

Rebel Rock Racing will continue working with key charity organizations including Pros For Vets in conjunction with Darwin Holdsworth's Brass Balls Cycles (brassballsbobbers.com) and The Andrew McDonough B+ (Be Positive) Foundation (BePositive.org).

The entire 2014 Rebel Rock Racing teams and drivers will be on track Friday, January 3 through Sunday, January 5 at Daytona International Speedway.