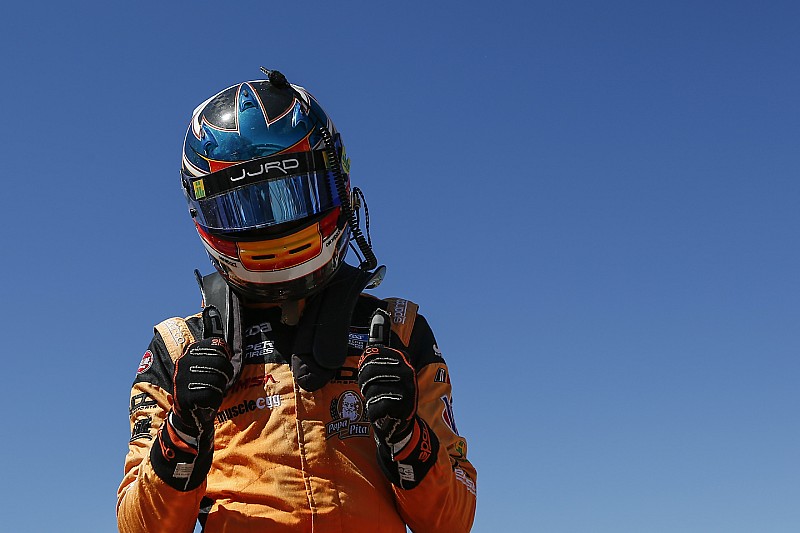 It’s safe to say the 2016 race season absolutely flew by.

It was an exciting week at Road Atlanta, filled with mixed emotions. It was a long race week for the final rounds of the Mazda Prototype Lites Presented by Cooper Tires championship, starting with a promoter test day Tuesday. There was absolutely beautiful weather all week at Road Atlanta, which made for a great event.

We started the weekend with two practice days around the very historic Road Atlanta track. The car was hooked up from the get-go of practice, and as we continued through practice, we also continued to fine-tune the car in each session. We ended the last practice session with a good car, and the entire JDC crew and I were ready for qualifying early Thursday morning.

Heading into Road Atlanta, I had seven wins and nine podium finishes out of 12 races this season. But I was second in the Lites 1 championship, five points back, due to engine troubles earlier in the year. The mentality headed into finale, Rounds 13 and 14, was to maximize everything. We needed to score max points to have a shot at the championship. The first step to give us a chance to maximize points this final race weekend was to qualify on pole in for both races.

Qualifying went by very fast, and it was even more challenging because it was very easy to catch traffic in the wrong places around Road Atlanta. As qualifying went on, I knew that I needed to get my lap in before the rear tires started to lose grip. I was able to get my lap in while managing gaps and qualified first for both races.

Time seemed to fly by in between qualifying and race one. I knew I had to win both of the races this weekend, so I wanted to push every lap, like a qualifying lap, without making mistakes. But I also had to manage the rear tires in the beginning of the race so I had a balanced car toward the end of the race.

The first race was pretty smooth. The car was great to drive, and I was able to pull out a 2.3-second lead, while managing lapped cars. The race ended up finishing under caution, which earned me my eighth win of the year. It was a great feeling to earn another win, but my mind was already focused on Round 14 and the championship fight the next day.

The win in Round 13 pulled me to within three points of the championship, which meant I had to repeat another victory and hope that a car got between me and my teammate to give me a shot at the championship.

Once again, the night before the final race seemed to fly by. I arrived at the track that Friday morning with the same mindset as Thursday: Qualifying laps all 45 minutes of the race and take care of the rear tires in the middle of the race and in traffic so I could have a car to push toward the end.

Coming up short in the title fight

It was a good feeling to get this win, but there were a little bit of mixed emotions. Unfortunately, I ended up losing the championship by one point to my teammate.

Every competitor knows this is a tough pill to swallow. But I’m taking a different view on the end result.

I looked back on the season as I was driving around the track after the checkered, and I realize I accomplished everything I wanted to at the beginning of the year. Going into the 2016 race season, I had these goals for my second year in a car: Earn my first pole position, earn my first race win and pull off my first weekend sweep. Everything else on top of those would be a bonus, and the focus was still on learning and developing as a driver who had only one prior season in any type of car.

I look back, and there’s nothing I can complain about. I improved a tremendous amount from 2015, from having four third-place finishes to having nine victories, 11 podium finishes and 12 poles in 2016. This is my way of looking back on our season, as well as looking at things that I can improve for next year.

None of these results this year would have been possible without the JDC Motorsports crew. These guys worked their butts off 24/7, not only at the track, but prepping the car back at the shop. Along with the JDC boys, I have to thank all of my sponsors who supported me throughout the year. Thank you to Muscle Egg, Papa Pita, dEp Patch and Wheel Woolies for their continued support.

A large amount of my development this year wouldn’t have happened without my stellar driver coach, Jonatan Jorge with JJRD. Thank you, Jonatan, for always pushing me and for helping me develop as a driver inside the car and as a person outside of the car.

What an amazing year. I have to thank everyone associated with the series – IMSA, Mazda for the great engines and Cooper Tires for their amazing support of this development series.

Now starts a new phase in the season. It is time to start getting our plans together for 2017, a very exiting time in the IMSA paddock with all the new cars being introduced.

I can’t wait to see what the 2017 season has to offer, and once again thank you to everyone who has supported me in my journey so far.