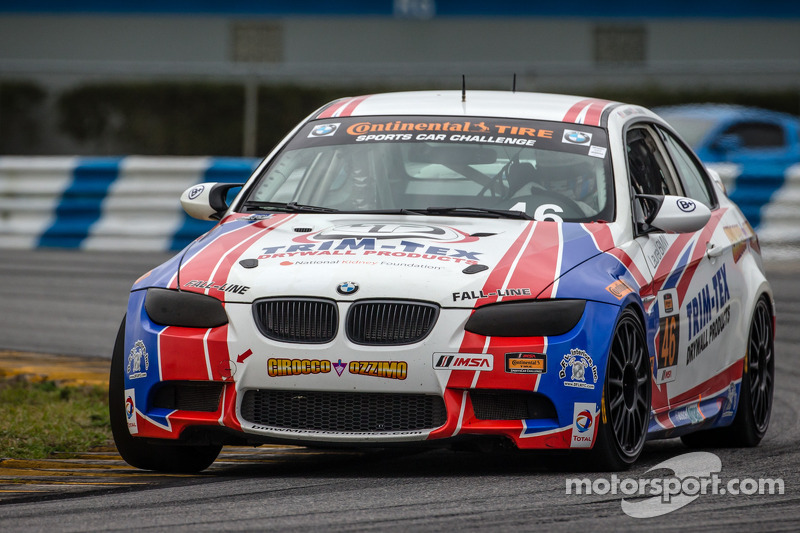 Trent Hindman and John Edwards broke through, winning in the No. 46 Fall-Line Motorsports BMW M3.

The third time was the charm for Fall-Line Motorsports on Saturday at Mazda Raceway Laguna Seca. After opening the 2014 Continental Tire SportsCar Challenge season with back-to-back second-place finishes, Trent Hindman and John Edwards broke through, winning in the No. 46 Fall-Line Motorsports BMW M3.

Edwards took the lead after an exchange of pit stops with one hour remaining, and then prevailed on three restarts to hold off Lawson Aschenbach in the No. 01 CKS Autosport Chevrolet Camaro Z/28.R by 0.473 seconds at the checkered flag. It was Edwards’ sixth Continental Tire Challenge triumph, while the 18-year-old Hindman won for the first time in his eighth start.

“Two seconds and a first is not a bad way to start the season,” said Edwards. “I really thought we should have won the first two races (at Daytona and Sebring). We’re not going to win every race, but the good news is we’ve been competitive with our M3 at every race, at tracks that are very different.”

Hindman started from the pole but lost the lead shortly after the green flag to Eric Curran, who started the No. 01 Camaro. Hindman waited it out and finally passed Curran on Lap 27 on the uphill before the Turn 8 Corkscrew. He led until his pit stop seven laps later.

“My plan at the start was to play it by ear, because I figured the Camaro would get us at the start, because it was blindingly fast,” said Hindman, who took his third career TOTAL Pole Award on Friday. “I wanted to be patient and play it smart, because I knew our car was great over the long runs. As soon as I got the opportunity, I took it, and put John in the best position possible. John drove a heck of a stint. They put tons and tons of pressure on him, and he brushed it off each time. It was incredible just watching John. That was the kind of driving I aspire to do in the future.” 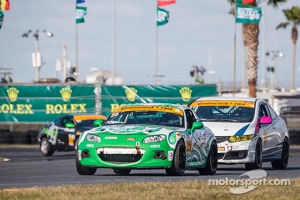 Freedom Autosport won its fourth consecutive Street Tuner (ST) race at Mazda Raceway, with Andrew Carbonell and Randy Pobst winning in the No. 26 Mazda MX-5. It was Carbonell’s third victory at the circuit and fifth of his career, while Pobst won in his first Continental Tire Challenge race at the circuit. It was Pobst’s eight career victory in the series.

The ST race came down to a three-way battle of Mazda MX-5s between Carbonell and CJ Wilson Racing teammates Stevan McAleer and Tyler McQuarrie. While he was passed several times, Carbonell managed to regain the lead each time, taking the checkered flag by 1.253 seconds over McQuarrie – who passed his teammate for second on the final lap.

“Mazda Raceway is a momentum track that favors our Mazdas,” Carbonell said. “This time, it was tougher for me because I was racing similar cars. I had to find out where I could capitalize on our car’s handling, and it was really strong in Turns 3 and 4 so I could get a good run into Turn 5.”

“I couldn’t believe it,” said McQuarrie. “Andrew could get by us on the outside of Turn 5 – and it’s really tough to do that.”

McQuarrie and polesitter Elliott Skeer finished second in the No. 3 CJ Wilson Racing Mazda MX-5, followed by McAleer and Chad McCumbee in the No. 5 entry of the team owned by Los Angeles Angels of Anaheim pitcher C.J. Wilson. Terry Borcheller and Mike LaMarra took fourth in the No. 23 Burton Racing BMW 128i, followed by Greg Liefooghe and Tyler Cooke in the No. 81 BimmerWorld BMW 328i in fifth.

CTSCC: Burton Racing ready to make some moves in Monterey