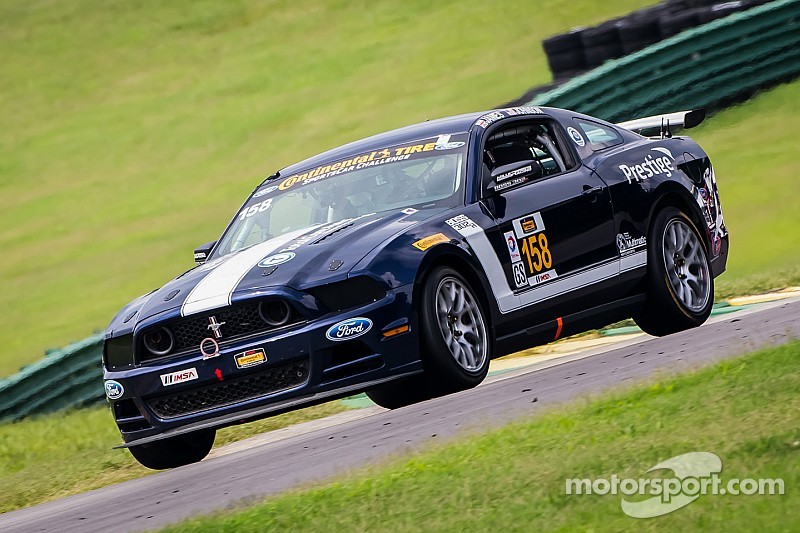 The Grand Sport Miller Racing-Multimatic Motorsports Ford Mustang Boss 302R (in photo) of James and Johnson won the race, but Hindman and Edwards, in their Fall-Line BMW M3, took the championship in the down-to the-wire battle with the Stevenson Motorsports Chevrolet Camaro Z/28R of Robin Liddell and Andrew Davis, which contended for almost all of the race but finished 10th.

“The last 10 minutes made me hate endurance racing,” joked Hindman. “It was like our entire season came down to the last two minutes. The Stevenson team gave us a great run, and I hope they feel the same about us.” Hindman and Edwards were a close second on the track to the winning Mustang, finishing 2.2 seconds back. Third was Matt Plumb and Brandon Davis in the Rum Bum Porsche 997.

James and Johnson dedicated the race to co-driver Roger Miller, who died earlier this season. Miller was part of the Salt Lake City family that owns Miller Motorsports Park and some Ford dealerships, and has been a big supporter of roadracing.

“I don’t think racing can get much more exciting than today,” Johnson said. This is the team’s first win of the season.

In Street Tuner, Eric Foss won the championship in the Murillo Racing Porsche Cayman, and he had hoped to share the championship with co-driver Jeff Mosing, but Mosing had to miss the race at Mazda Raceway Laguna Seca after being hospitalized with back problems. The Murillo team “is top-notch,” Foss said. They finshed a conservatve sixth in class Friday, but that was enough to edge out the Team Sahlen Porsche Cayman that was their nearest competition for the title.

The class win in the race was by Ryan Eversely and Kyle Gimple in the Children’s Tumor Foundation/Compass 360 Honda Civic, just ahead of the Freedom Autosport Mazda MX-5 of Randy Pobst and Andrew Carbonell. “It was our race to lose,” Gimple said but the two drivers and the pit crew executed the track conditions – damp at the start, dry at the end – perfectly.

Fifty cars started the race, with eight retiring before the end.

The teams will celebrate tonight at the Continental Tire Challenge awards banquet at nearby Chateau Elan.