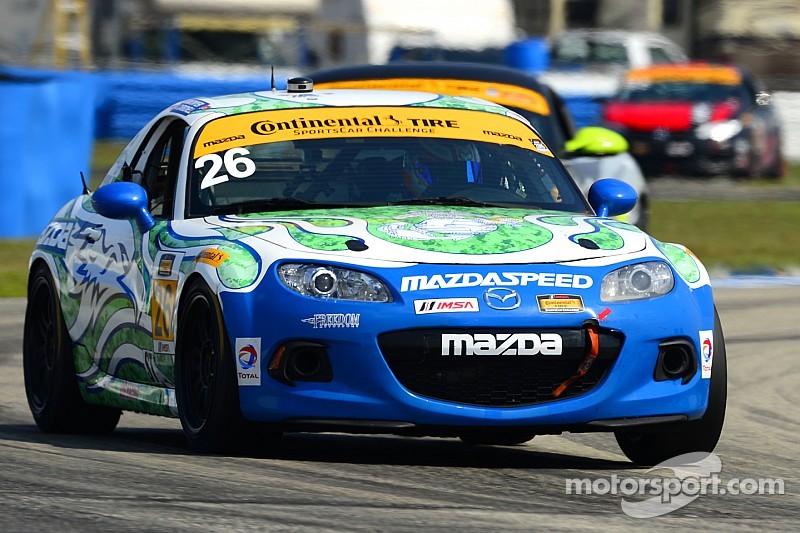 Sgt. Liam Dwyer will have an extra incentive to do well.

Winning at Mazda Raceway Laguna Seca in a Mazda MX-5 is the perfect scenario for Freedom Autosport, and it is something they have done for the past four years in a row. This weekend, the team hopes to make it five consecutive ST wins during round three of the IMSA Continental Tire SportsCar Challenge Series. U.S. Marine Staff Sgt. Liam Dwyer will have extra incentive to achieve a top finish, because the Sergeant who saved his life in Afghanistan will be in attendance.

Freedom Autosport will be relying on teamwork to achieve their goal: in addition to the No. 26 Mazda MX-5 of Andrew Carbonell and Liam Dwyer, the team will also enter the No. 25 Mazda MX-5 with team alumni Tom Long and Britt Casey, Jr.

Dwyer will have something additional to look forward to during the race weekend: U.S. Marine Sergeant Aaron Denning will be in attendance. Sgt. Denning came to Dwyer’s aid after an IED exploded under him in a compound in Afghanistan, performing life-saving procedures such as applying tourniquets and stopping arterial bleeding. Dwyer credits Denning with saving his life, and this will be both Denning’s first sports car race and his first time seeing Dwyer race.

Dwyer hopes to put on a great show for Denning. “Mazda Raceway is a tight, technical circuit with a lot of flowing corners, and that’s where the Mazda MX-5 really comes into its own. It’s the prefect track for our car,” he said. “We’re really expecting a podium there – anything less will be a disappointment for us.”

Carbonell has won at Mazda Raceway three times already, including 2011, 2013 and 2014. He is also focused on the team effort it takes to win at the classic 2.238-mile track. “The team has done a great job of coming together this season, and at the end of the day, it’s a team sport and we rely on everyone,” Carbonell said. “We know we’re good at Mazda Raceway Laguna Seca, and it’s a great track for the Mazda MX-5, so we’re all very much looking forward to the race.”

Tom Long won at Mazda Raceway in 2012 behind the wheel of the No. 25 Mazda MX-5, and he is looking forward to co-driving with Britt Casey, Jr., and to working with Carbonell on track.

Long said, “It will be a thrill to drive for Mazda at Mazda Raceway Laguna Seca! Considering Freedom Autosport’s history at that track, there could be no better team or car to be there in. Having Britt Casey, Jr., in the lineup will be a very strong asset: he absolutely impressed the team with his maturity level and his skill last year.”

At just 17 years old, Casey is the youngest driver in the Continental Tire Series. He drove in three races with Freedom Autosport last year.

“Last year was a learning year for me, getting acclimated to the car, the series and the tracks. I’ve been learning everything I possibly can,” Casey said. “I’m really looking forward to picking up where I left off with Freedom Autosport. Tom is extremely talented and has been a big influence on me, so co-driving with him will be really helpful to me. I’m definitely looking for more success.”

Freedom Autosport will aim for their fifth consecutive victory at Mazda Raceway Laguna Seca on Saturday, May 2, at 1:00 p.m. PT. Fans can watch live at IMSA.com, catch the Fox Sports 1 broadcast at 9:00 a.m. ET on May 17, and interact with the team on Facebook and Twitter.

Kenton Koch column: From karts to cars, a tricky transition