There aren’t many automotive giants as new to motorsports as Hyundai. In fact, until quite recently, its involvement was barely a blip on anyone’s radar. But a big-profile, and highly successful (at the second attempt) World Rally Championship campaign has grabbed everyone’s attention, and it has really made a name for itself in the touring car world too.

The global TCR platform has allowed it to spread its wings to the United States, one of its most important markets. Last year, Hyundai took its first racing steps with the i30 N in the Pirelli World Challenge series with Bryan Herta Autosport, and immediately proved itself to be a winner – mirroring the success of Gabriele Tarquini in the World Touring Car Cup in the same machinery.

This year, it took a step up in competition, joining IMSA’s Michelin Pilot Challenge (the old Continental Tire series) with a two-car attack for the new Veloster N model in the two-driver, long-distance championship. Despite being new to endurance racing, BHA has kept up its winning record in every series it has contested, and goes into the Road Atlanta finale leading the championship.

The eponymous team owner himself needs little introduction, as an IndyCar race winner and Indy 500-winning team owner. Aligning his team with the South Korean marque feels like the baby steps towards something much bigger down the road, and Herta admits it’s been a steep learning curve over these past two seasons.

“It’s been fun,” he enthuses. “Last year was kinda by design to be an education year for us in TCR racing, and long-distance racing in general. It’s completely new to us, and the group [running the cars] was our Global Rallycross team. Everything was new: front-wheel drive touring car racing on a circuit – and we had a 1-2 finish in our first race!

“We learned a lot with the i30 N, and we knew the Veloster was coming this year, so it was important to have a good year and support that, so I’m really pleased with how it’s been going. The racing has been very tight, so it’s up and down for everybody. We’ll see what happens in Atlanta…” 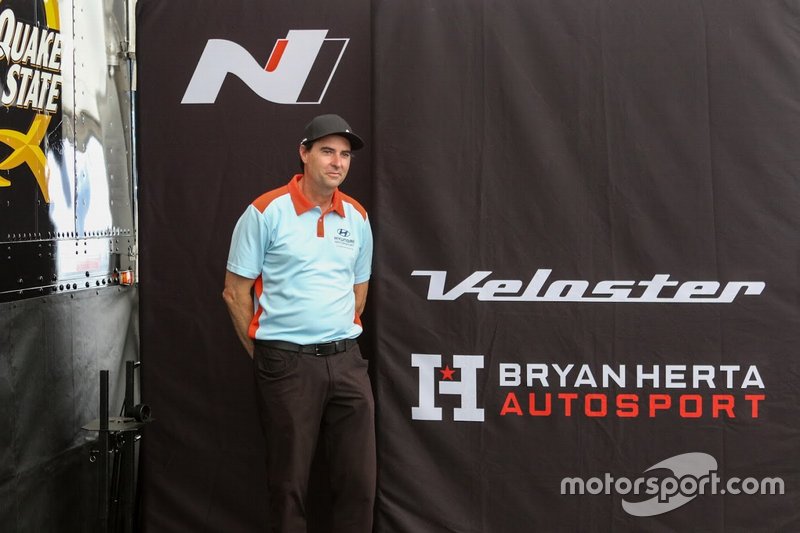 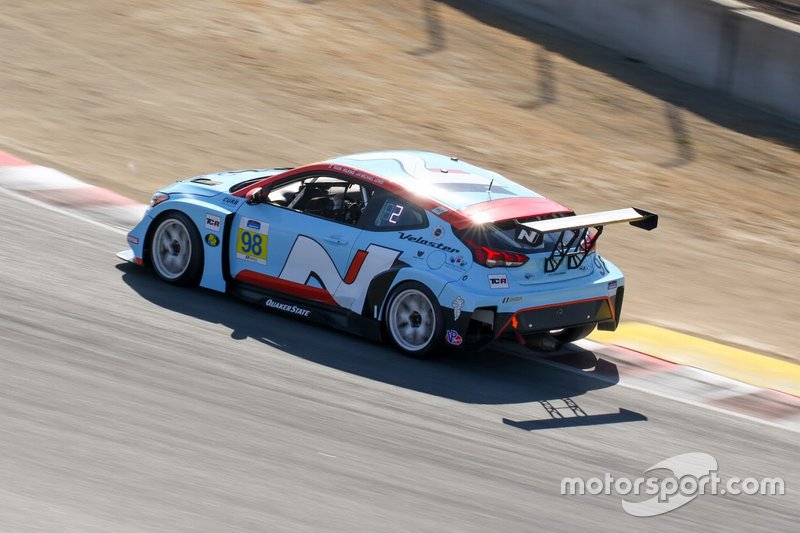 Talking of the switch of series, Herta adds: “There’s greater depth and a lot more nuance here, with pitstops and driver changes, plus the class split, so it’s multi-class racing. It changes the chess game that you play, and it took us a while to learn. It wasn’t until Mid-Ohio that I believed we’d got our arms around it all, and bringing the win home there was like ‘Now we’re here, now we're truly competitive’. The first two weekends we were just surviving! From then on it’s been great; we’ve performed really well everywhere.”

Established in 2012, Hyundai Motorsport Germany in Alzenau builds and homologates the i30 and Veloster racecars, which are then shipped over to Herta’s Brownsburg, IN. raceshops for some American-style fettling.

“We work closely with them, and the cars arrive built and ready to go to the track,” explains Herta. “Then it’s down to us to tailor it – we had to do the high-speed refueling system, for example, because they don’t have that in Europe in TCR. So we had a few things to adapt, and we’re always looking to develop it, and if we did change anything it has to be homologated through them.”

Although run separately from his IndyCar team, there’s some beneficial crossover: “A number of our people have IndyCar experience in the past, and there’s some learnings that help with this side of our business – certainly in terms of our pitstop approach and race strategies. Some of the tools we use to calculate our strategy have certainly been helpful here.”

Herta raves about the relationship that Hyundai has served up, with a direct line of communication to its senior U.S. management, and his enthusiasm for the sport has been reflected by the manufacturer.

“They have been phenomenal,” he says. “I’ve worked with a lot of manufacturers in my career, and what’s different is that Hyundai is relatively new to motorsport. And when you talk about Hyundai motorsports in the United States… really, we’re it! So, to me, it’s very exciting, and great to represent a brand in such a one-on-one way. We deal with very top-level management in our program, who are highly engaged. They are very aware about what’s going on, which I’ve never really experienced in the past, so we love that. I’m really looking forward to what we could be doing together in the future for them.

“Hyundai is a massive company, and when it comes to its performance car brand, it’s only just started. Performance cars need to go racing, so it’s great for us to be in this position. Just look how the WRC boys are giving Toyota, Citroen and Ford all they can handle right now! Did anybody see that coming? You should never underestimate them, when they put their minds to it, Hyundai is 100% committed to win.” 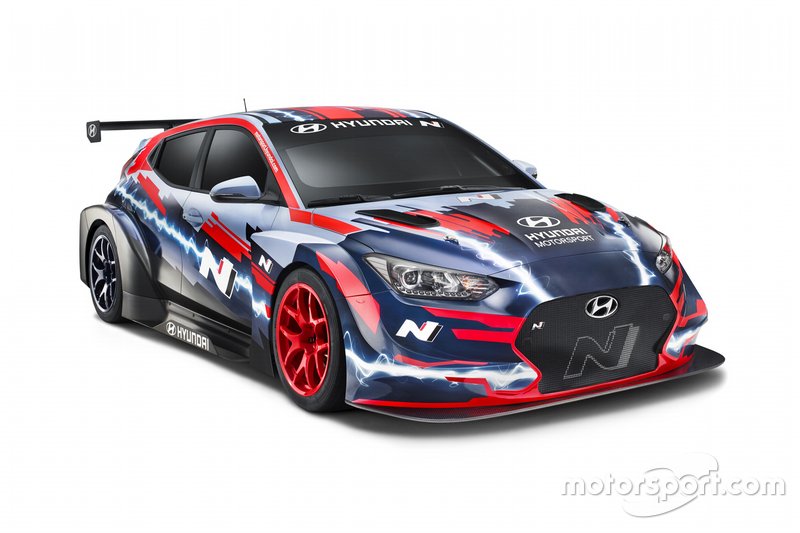 It also seems committed to growing its motorsport wings, unveiling the all-electric Veloster N ETCR at the Frankfurt Motor Show last week (above).

“It’s really exciting,” says Herta. "A lot of people are buzzing about it here, and in this class it makes a lot of sense for electric. It could be very exciting. If you went to a sprint-race format with these cars, it would play really well. We’re waiting to see who else would be interested in competing, but if there is to be a series to be run over here, we’d be first to raise our hand to do it.”

The beauty of the regular TCR rules is their relative simplicity, opening the door to supply customer cars for teams. This will be the focus of the team’s off-season activity.

“The introduction of the Veloster coincided with the start of the IMSA season, so we only really got our second car a week before the opening race,” says Herta. “We weren’t in a position to deliver any customer cars for this season, but we do have a customer running in the World Challenge series. They’re looking to expand, and we’re talking to a few more teams – both in IMSA and World Challenge for next year. We’re also looking at the Canadian series.

“Now that we’re established, we’ll look to sell some more cars. We have a great spares inventory here now, so that’s one of our big goals for the winter – to get more cars in customer hands, and get them racing.

“We’ve also got some plans to have some increased brand presence in the paddock next year, and there will be some pretty exciting programs available where we’ll reach out to Hyundai owners. We’re really keen on people seeing a different side of Hyundai. People maybe don’t think about it as a performance brand, it’s been more of a great-value brand – everyone knows about the 100,000-mile warranty, right? – but the Veloster N is the first performance machine, and there’ll be more coming. It really is a nice car.” 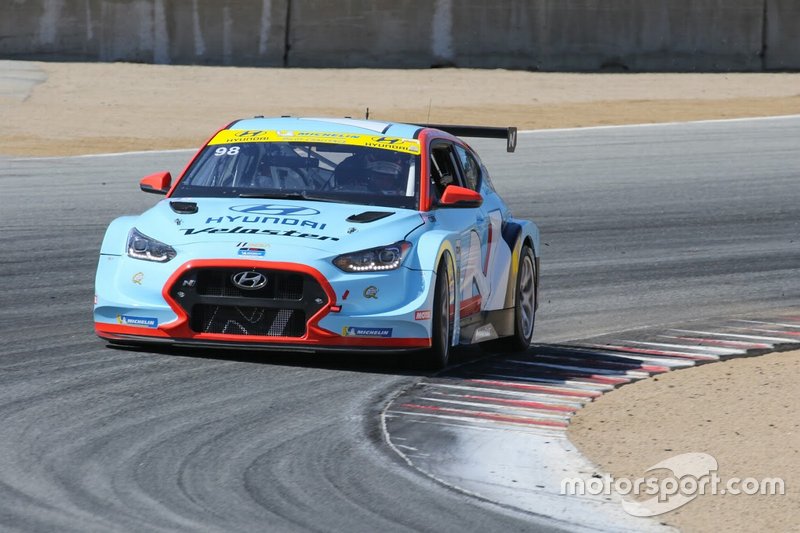 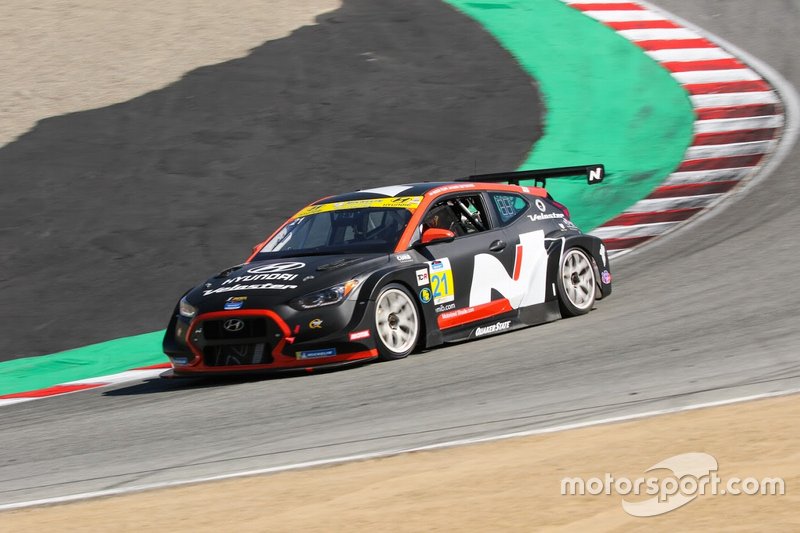 So, what comes next?

Although committed to touring car racing, one wonders about where Hyundai might go with its nascent racing program in the USA. Positioning itself within the IMSA fold gives it some intriguing options on the sportscar side, and with new DPi regulations attracting marques that don’t necessarily have ‘halo’ supercars in their product range, could Herta see that being a possibility down the line?

“I think a lot of things could be interesting to them,” he replies. “I wouldn’t be surprised if they weren’t involved in some kind of top-line motorsport here in the U.S. in the next five or six years. When and where that would be, that’s a question for them. As far as I’m concerned, if they want to go racing anywhere, I’d hope that we could be part of it.

“I’ve raced in a number of variations of what’s now the IMSA WeatherTech SportsCar Championship, and I’ve always enjoyed this type of racing – the paddock, the variety of cars and the multi-class element. For me to be back here and having our cars racing has been a lot of fun, and we’d love to grow that over time. I’d like to think we could grow with Hyundai, and I think we’ve shown from IndyCar, to Indy Lights to Global Rallycross to TCR – every championship in which we’ve ever competed in we’ve won, and that’s important. We’re up for any challenge.”

How about an IndyCar engine program?

“There’s a good argument to be made for that too!” says Herta. "I tell you what, they would bring so much to any series they compete in, because they’re willing to activate. The reaction we’ve had to them in the paddock from people has just been great. A guy came up to Mark [Wilkins] and Michael [Lewis] today and literally said, ‘I bought a Veloster N because I saw you guys racing.’ He made a buying decision based on what we’re doing. That’s really cool, and what great validation for a racing program.

“As Hyundai spreads its wings, I think going up the ladder would be really good. But it’s also important to have a grassroots program, so there’s an aspirational element that’s accessible to anybody who’d like to take part. We’ve just built this TCA car, a Veloster Turbo R-Spec, and we’ll race it at the Las Vegas World Challenge finale [in October]. Its price point is below $50,000 and that’s ready to go on track. We’ll market that as a track day car, as well as for the World Challenge series.

“So I think if they did expand to one of our larger series with a big program in future, I think that connection to people who say ‘hey, I race a Hyundai too’ is a really good connection. They can watch the big races on TV, and be a weekend warrior in a Hyundai too.” 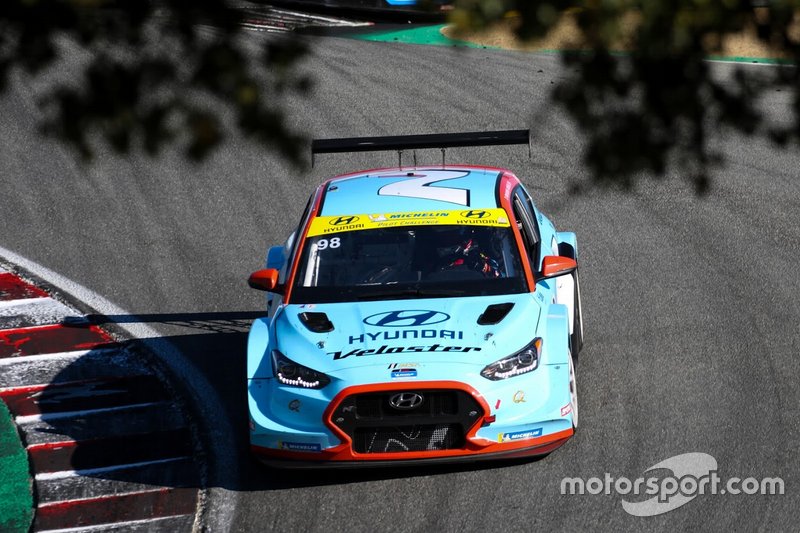 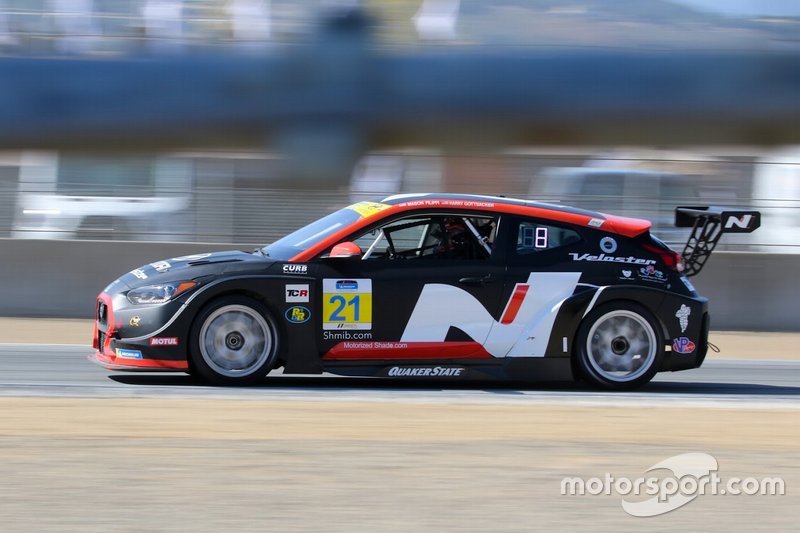