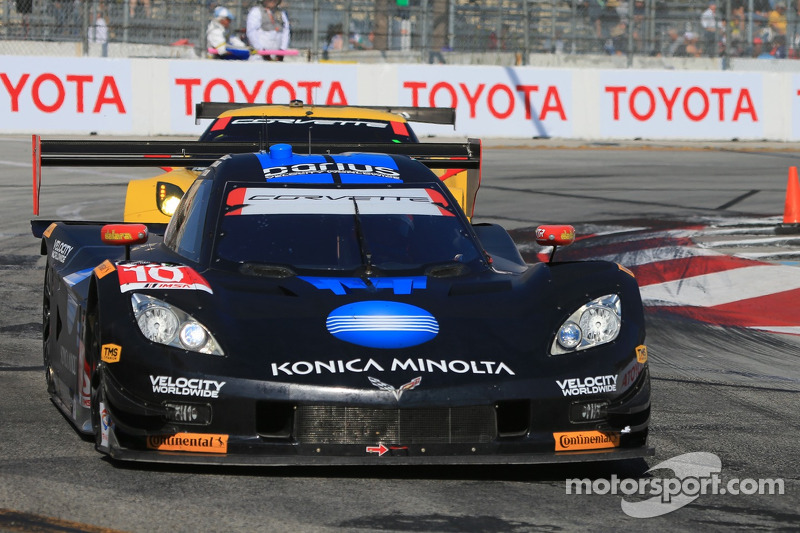 Daytona Prototype teams in the TUDOR United SportsCar Championship, such as the Wayne Taylor Racing entry seen above, face a reduction in horsepower this weekend at Mazda Raceway Laguna Seca, as IMSA officials continue to strive for an equitable balance of performance in the headlining Prototype (P) class heading into the fourth race of the season.

The P class features DP, P2 and DeltaWing cars that are inherently dissimilar, thus presenting an intriguing challenge — and the opportunity to create some of the most unique prototype racing in the history of North American sports car competition.

It’s a moving target, but IMSA officials are honing in. Here’s a rundown of the latest adjustments:

--Corvette DPs will race with a one-millimeter smaller air restrictor, knocking back air flow to the engine;

--Ford engines also will have a slight reduction in boost for the twin turbos.

The bottom line: between 10-14 less horsepower for the DPs, on the 2.238-mile, 11-turn circuit. IMSA Vice President of Competition and Technical Regulations Scot Elkins said progress — real progress — is being made.

“Honestly, the truth of the matter is that, after you look at the [season-opening Rolex 24 At Daytona separately], which you really have to do because it’s a totally unique event [with the high banks and higher speeds involved], we’re really only two races into this new deal.

“Now, in no way do we want to pat ourselves on the back — we’re not going to do that by any means — but we do have the lap times between DPs and P2s very close now. And to be only making relatively small adjustments at this stage is something we feel good about.”

Something perhaps overlooked somewhat by those critiquing the results of the first three races, all won by DPs: regulations are only part of the puzzle. Drivers, pit stops and simple racing luck come into play as well.

Said Elkins: “There is so much involved with winning a race. And there’s only so much we can have an effect on [with regulations].”

It also should make for good racing, with the TUDOR Championships Prototype Challenge (PC) and GT Daytona (GTD) classes in the first race, followed by the Prototype (P) and GT Le Mans (GTLM) classes in the second event.

This weekend will mark a repeat P-GTLM combo run; the two classes raced together on April 12 in the Tequila Patrón Sports Car Showcase at the Long Beach Street Circuit.

Avoidance behavior: Corvette Racing utilizing ‘extra eyes’ to elude contact: A memorable high-speed “diss” at the 2010 24 Hours of Le Mans has led to this: the Collision Avoidance System (CAS-M) developed by Pratt & Miller and Bosch Motorsport North America in collaboration with Bosch.

The system is being used by both the No. 3 and No. 4 Corvette C7.Rs fielded in the TUDOR Championship by Corvette Racing, giving drivers a rear-facing view of traffic and the chance to gauge how quickly traffic is moving toward or away from them.

At Le Mans four years ago, a prototype zipped by a bit too closely, forcing one of the Corvette Racing entries off-track. It was a catalyst for the CAS-M project, which debuted at the 2013 Sebring race. The system was upgraded for the debut of the 2014 Corvette C7.R. It includes updated software and hardware for improved reliability.

CAS-M, works as an “extra set of eyes,” in the words of driver Richard Westbrook. Track images are captured and overlaid with radar data on the rear view display. This allows for at-a-glance driver recognition, even at night and in the rain.

Since the 2013 debut, the system has received two awards in the motorsports community, is now in its production-ready version and is about to be shipped across the world to teams in need.

The new version totes some serious improvements: 50% thinner, 30% lighter and streamlined internal hardware components for improved reliability and manufacturability. This has been the result of intense collaboration with Bosch Motorsport and its production expertise over the last two months.

One of the advantages of this system is that the driver doesn’t need to take their eyes off the road; they can utilize it with only their peripheral vision due to how the interface is designed.

“It’s funny that we are developing this product and putting so much time into how it looks and functions, to have the end goal of making it so the driver never has to look directly at it.” said Chris Hammond, the Lead Radar System Engineer at Pratt & Miller.

All cars in the class are ORECA FLM09s, but the sameness ends there.

This may be a spec class, but it has special drivers, including some who have excelled in other forms of racing.

Start with Colin Braun, co-leader of the PC points with co-driver Jonathan Bennett in the No. 54 CORE autosport entry. Braun is a former driver at the NASCAR national series level, winning the 2008 rookie of the year award in the NASCAR Camping World Truck Series.

Co-driving the No. 09 RSR Racing entry with Duncan Ende is Bruno Junqueira, a three-time CART championship runner-up and the 2002 polesitter at the Indianapolis 500.

Luis Diaz, former Indy Lights and GRAND-AM Rolex Series driver, is co-driving the No. 25 entry for 8Star Motorsports this weekend, with Sean Rayhall.

“People always talk about PC being a ‘quote/un-quote’ Pro-Am class but when you look at some of the guys running in PC … it’s crazy,” said IMSA Vice President of Competition and Technical Regulations and Development Scot Elkins.

“Some of the guys running are really high-talent.”

Sgt. Dwyer, a twice-wounded combat Marine in Iraq (2007) and Afghanistan (2011), will co-drive Freedom Autosport’s No. 27 Mazda MX-5 with Tom Long. Sgt. Dwyer lost his left leg in Afghanistan, and will be racing with a prosthetic leg. The team has modified the clutch pedal with a quick-release pin. He is one of two veterans on the team, alongside Mark Pombo (Army), who will be co-driving the No. 25 Mazda with his brother, Mat Pombo.

Freedom Autosport is looking for its fourth consecutive 1-2 finish at Mazda Raceway. Andrew Carbonell – winner in 2011 and 2013 – joins Randy Pobst in the No. 26 Mazda, coming off an ST class victory in the most recent Continental Tire Challenge race at Sebring.

Saturday’s festivities are free to military in uniform and veterans with ID. Freedom Autosport is sponsoring Military Island at the circuit, which will have free hospitality to all military guests. Activities also include a silent auction to benefit the Monterey Bay Veterans and Vet Motorsports.

Edwards, Hindman take points lead to Mazda Raceway: John Edwards and Trent Hindman have parlayed a pair of runner-up finishes to a healthy, 15-point lead atop the Grand Sport (GS) point standings only two races into the 2014 campaign. They co-drive the No. 46 BMW M3 for Fall-Line Motorsports. Edwards finished second at Mazda Raceway last year, co-driving a Chevrolet Camaro GS.R for Stevenson Motorsports.

Lucas Bize and David Levine are currently second in the GS points, coming off a fifth-place finish at Sebring in the No. 78 Racers Edge Motorsports Ford Mustang Boss 302R.

Continental Tire Challenge notes: Eric Foss and Jeff Mosing followed up their season-opening victory at Daytona with a third-place finish at Sebring in the No. 56 Murillo Racing BMW 328i. The pair leads the ST standings by nine points over Tyler Cooke and Greg Liefooghe, who took second at Daytona in the No. 81 BimmerWorld Racing BMW 328i … Rebel Rock Racing is expanding to a four-car entry for the upcoming Continental Tire Challenge races, beginning with Mazda Raceway. The Florida-based team is running two cars in each class, and will debut the No. 87 Porsche Boxster in the ST class. Al Carter will be making his debut in the car, co-driving with Brett Sandberg … Elliott Skeer will make his Continental Tire Challenge debut at Mazda Raceway. The 19-year-old from Carlsbad, Calif., will fill in for Marc Miller in the No. 3 CJ Wilson Racing Mazda MX-5 co-driven by Tyler McQuarrie.

Conway takes points lead into next Lamborghini Super Trofeo round