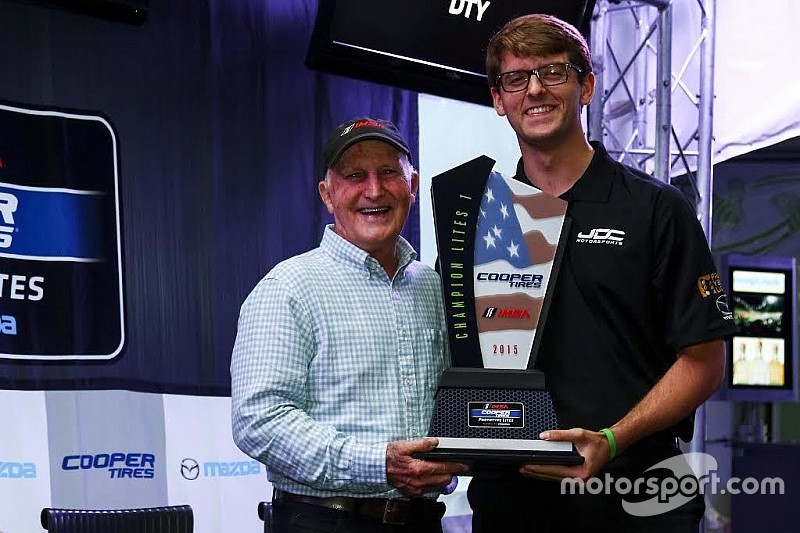 Last weekend I drove my JDC Motorsports Prototype Lites car powered by Mazda to victory in the final two rounds of the season at Road Atlanta, equaling Tristan Nunez’s record of 11 wins in 14 races. It was a successful and extremely fun year.

Coming from the Mazda MX-5 Cup, it was quite a big jump to a car with a ton of downforce. So to tell you I was nervous is an understatement. It came as a big surprise when I found myself on pace with the leaders in the first official test session of the year back in February in New Orleans.

Making the choice between CTSCC and Prototype lites

Coming off winning the Mazda MX-5 Cup championship with $200,000 in my pocket to use toward driving a Mazda this past year, it was quite nerve-racking to make the right choice for 2015. I could either go to the Continental Tire Sports Car Challenge in ST or IMSA Cooper Tires Prototype Lites Powered by Mazda.

The logical step would have been to go to ST, since that would put me back into a car I was familiar with. But my goal was to race in the Mazda SKYACTIV-D Prototype, and I had no prior experience in downforce cars. To prove myself, I needed to make the ginormous step to Prototype Lites to have the best shot at achieving my goal.

The new challenge of driving with downforce was overwhelming at first. But once I set foot in the car, it was actually quite easy. The difficult part was being able to turn the wheel and hold my head up! The car was extremely physical, so daily gym visits became a necessary part of my routine.

Once I was physically fit enough to drive the car for longer than 45 minutes, the next challenge was understanding the difference between mechanical grip and aero grip and how one can help the other. Thanks to Walt Preston, my engineer, I learned a ton in a short amount of time. We would work together during each session, so by the time qualifying came for each round, I had a well-handling car with which I was more than happy.

I can’t brag enough about how awesome the entire JDC team was this year. They did everything they could to ensure my tall stature fit in the car and went above and beyond my expectations on the car prep. They even made a brand-new extended steering column for Clark Toppe (my teammate who had me beat on height) to ensure foot room and steering wheel clearance.

Clark and I both fit like a glove inside our cars even though it looked like we were twisted into a pretzel. It goes to show how great this team is and the results prove it, as JDC earned the top three spots in the Lites 1 championship.

This season has been filled with awesome opportunities and lots of great memories. All along the line, we had tons of fun, and it wouldn’t have been the same without my amazing teammates, Matt McMurry and Clark Toppe, who had me rolling on the floor laughing multiple times.

The opportunities I have been presented with this year wouldn’t be possible without Mazda Motorsports. Their ladder system in open-wheel and closed-wheel racing have offered chances for drivers to prove themselves and be rewarded to move up to the next step, and I am proud to be a part of this program. Others who helped out this year were Justice Brothers, who provided the team with cleaning fluids needed to clean four cars throughout the year. It was also great to be a part of the Donate Life family, helping build awareness of organ donation through my story of how my mom received a heart transplant.

Next year is going to be fun-filled season, and things are looking bright. My plans for next year will be sorted out within the next month or two, and I can’t wait to see exactly what is in store.