Lewis will make his series debut in the season-opening rounds March 13-14 at Sebring International Raceway during the Mobil 1 Twelve Hours of Sebring.

DAYTONA BEACH, Fla. - Michael Lewis has secured a full-season drive in the 2014 Porsche GT3 Cup Challenge USA by Yokohama, in part through a scholarship from the International Motor Sports Association (IMSA) and supported by Porsche and Yokohama. 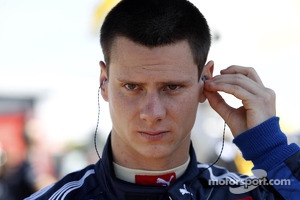 Michael Lewis The IMSA Scholarship is awarded to a driver without prior Porsche GT3 Cup experience and is designed to attract and recognize new talent that desires to race in the Porsche GT3 Cup Challenge USA by Yokohama.

This scholarship represents a vital first step in building the necessary budget required to race in this highly competitive championship, one of nearly 20 similar Porsche single-make series worldwide.

"It was a very special opportunity to not only receive this scholarship but to simply be invited by Porsche Motorsport North America to their Young Driver Academy, as there were only four drivers at the test," Lewis said. "I was lucky enough to be one of those drivers. As a result, earning this scholarship was something I couldn't have imagined, but it happened! I would like to thank IMSA, Porsche and Yokohama Tire."

Before his stellar Formula 3 career, Lewis raced in Europe and Asia in Formula BMW. He also has displayed his diverse talents in NASCAR Late Model stock car races and USAC open-wheel short-track competition in the United States.

Lewis started his career in 2003 with multiple victories in quarter-midget racing in California before moving in 2005 to karting, in which he won championships and races in the United States and was a regular podium finisher in Italian and French competition.

Lewis showed the skill on and off the track that earned him the IMSA Scholarship as one of four rising talents invited to participate in the Porsche Young Driver Academy last September at Barber Motorsports Park near Birmingham, Ala.

The other three drivers - Angel Benitez Jr., David Ostella and Madison Snow - were veterans of Porsche GT3 Cup competition in the United States and Canada and have advanced their careers in 2014.

"We are happy that IMSA has selected a young American driver with international experience to receive the 2014 IMSA Scholarship," said Jens Walther, Porsche Motorsport North America president and CEO. "Even though this was just our second year of holding the Young Driver Academy, we've already been successful at identifying driving talent inside and out of the Porsche world. It is confirmation that Porsche's commitment to recognizing and supporting drivers early in their career is the right thing to do.

"Michael proved himself in our 2013 Academy, and this scholarship will provide him the opportunity to do the same in the Platinum class of 2014 Porsche GT3 Cup Challenge USA by Yokohama."

CTSCC at Sebring: Fall-Line Motorsports team is eager to defend their last victory