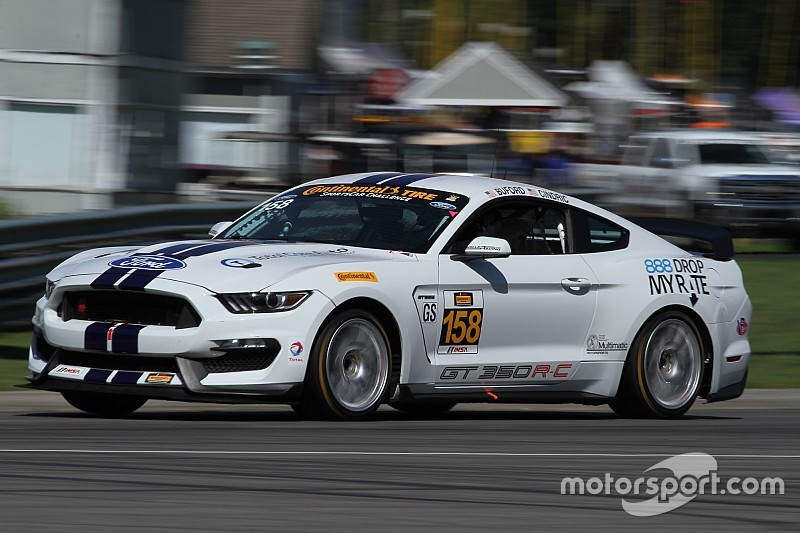 Lakeville, Connecticut – One race after seeing their new No. 15 Ford Performance/Multimatic Motorsports Ford Shelby GT350R-C destroyed at Canadian Tire Motorsport Park, Scott Maxwell and Billy Johnson opened up the second half of the 2015 Continental Tire SportsCar Challenge season by winning the Northeast Grand Prix at Lime Rock Park in a replacement car.

It was a 1-2 finish for Multimatic Motorsports, with Canadian Tire Motorsport Park winners Austin Cindric and Jade Buford taking second in the No. 158 Ford Shelby GT350R-C.

Maxwell started last in the Grand Sport (GS) field after experiencing an electrical problem in qualifying, and gradually worked his way to the front – taking the lead one lap before his pit stop to hand the car over to Johnson. Taking over in fourth, Johnson passed Lawson Aschenbach for the lead with 45 minutes remaining and led the final 46 laps on the 1.53-mile seven-turn “classic” layout.

It was a great battle, but BJ fought me clean,

“I just had to be patient, manage the Continental Tires and pick the guys off one by one,” Maxwell said. “The key was staying consistent and staying out of trouble. I knew we had a good chance if I handed Billy a good car to close the race.”

It was the 10th career Continental Tire Challenge victory for Maxwell, and 17th for Johnson.

“Getting a new car built in one week was incredible,” Johnson said. “The guys at Multimatic gave us a great car, and they had great pit strategy. We also had a little bit of luck go our way, so we were able to come out on top. The result is deserving of the team’s hard luck and dedication.”

Johnson took the checkered flag 3.093 seconds ahead of his teammate. Buford prevailed in a tight battle for second over BJ Zacharias, giving the No. 14 Nismo GT Academy Nissan 370Z started by Brad Jaeger its third podium finish of the season.

“It was a great battle, but BJ fought me clean,” Buford said. “He had a bit on me on the straights, so I had to be a little defensive. I couldn’t be happier finishing first and second. We’ve definitely been building momentum, so we just have to keep pushing for the championship.”

It was a tough day for the Stevenson Motorsports team. Matt Bell started from the pole and dominated the early going in the No. 9 Chevrolet Camaro Z/28.R. The lead cycled to Aschenbach after pit stops, but he spun while running second with 37 minutes remaining. He came back to finish fifth.

The points-leading No. 6 Stevenson Motorsports Camaro Z/28.R of Andrew Davis was penalized early in the race for contact with the No. 13 Billfish Foundation/Rum Bum Film & HD Studios/RumBumGear.com Porsche 911 of Hugh Plumb while battling for second in heavy traffic. While Robin Liddell worked his way back to finish fourth in the Camaro, Matt Plumb ended up 10th in class after losing many laps in the pits.

Unofficially, Davis and Liddell extended their GS lead to 24 points over the Plumb brothers, 195-171. Cindric and Buford are tied for third with Bell and Aschenbach with 163 points each.

The two-hour race went under full-course caution on the opening lap, when Ashley Freiberg went off course and landed atop the tires at the exit of Turn 4. The No. 46 IHG Rewards Club/Trim-Tex/Fall-Line BMW M3 co-driven by defending GS champion Trent Hindman was unable to continue – giving the team its second consecutive DNF. From that point, the lone full-course caution waved for two laps for the disabled No. 92 HART Honda Civic Si of Kevin Boehm, setting up a 12-minute sprint to the checkered flag.

Pitching racing’s equivalent of a shutout, Chad McCumbee and Stevan McAleer took their second Street Tuner (ST) class victory of the season in the No. 5 ModSpace Mazda MX-5, giving the CJ Wilson Racing team owned by Los Angeles Angels of Anaheim lefty C.J. Wilson the lead in the point standings.

McCumbee took the TOTAL Pole Award on Friday and led the opening 40 laps in the race before pitting at the 45-minute mark. While Jeff Mosing, Justin Piscitell and Corey Lewis took turns running up front, the lead cycled back to McAleer following green flag pit stops, and the Mazda driver led the final 45 laps.

“Chad did the majority of the work today to pull us a gap,” McAleer said. “I was just super careful not to do anything in traffic. We pretty much led every lap, and I’m sure C.J. Wilson and the ModSpace team will celebrate tonight.”

Mirroring the GS race, ST featured a terrific fight for second. Eric Foss managed to hold the position in the No. 56 Murillo Racing Porsche Cayman started by Mosing, despite steady pressure down the stretch from Spencer Pumpelly in the No. 17 RS1 Porsche Cayman started by Luis Rodriguez Jr. Foss took the checkered flag 6.553 seconds behind McAleer.

“Eric frustrated the heck out of me today – like he should have,” said Pumpelly, winner of the at Canadian Tire Motorsport Park race two weeks ago. “I tried everything I could to get by, but he was a little bit craftier than me today.”

Freedom Autosport drivers Liam Dwyer and Andrew Carbonell entered the race in the ST championship lead. Dwyer was hit by and spun into a tire barrier battling for position 25 minutes into the race, damaging the front end of the car.

The drivers of the No. 26 SemperFiFund.org Mazda MX-5 worked their way back, with Carbonell passing the Burton Racing BMW 128i of Terry Borcheller for 11th on the final lap. Entering the race with an 11-point lead, they now unofficially trail McAleer and McCumbee by four points, 162-158

“I found out after the race that a Cayman got into me on No-Name Straight,” Dwyer said. “It wrinkled the front end pretty bad, and it put us down a lap. Andrew didn’t have an optimal car, but was still running quick laps. I’ve got to thank the crew for getting us an 11th-place finish.”

Round 7 for the Continental Tire Challenge will be at Road America on Saturday, August 8.