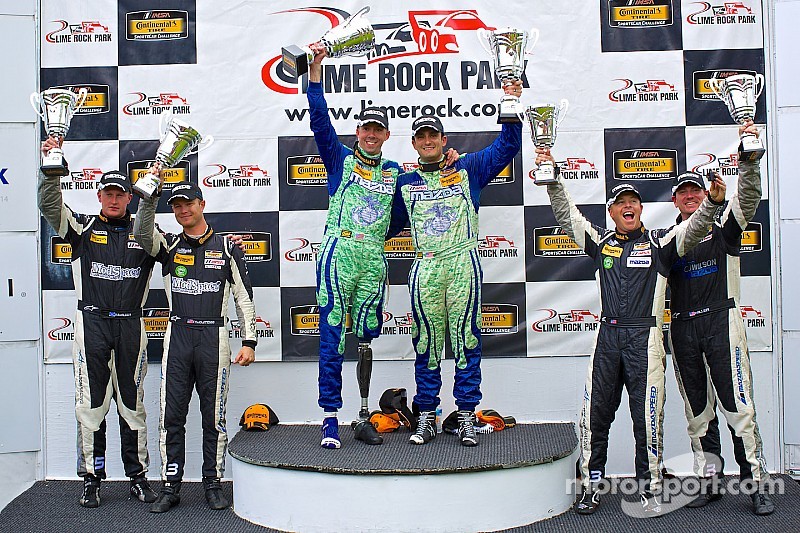 When Hollywood scripts a racing movie, they tend to go overboard.  Having an injured U.S. Marine Staff Sargent winning a professional race, in only his second start, just miles from where he grew up, on the third anniversary of his ‘Alive Day’, after 50 surgeries since that injury, on Memorial Day weekend.  Who would believe that?  Believe it, as that’s exactly what happened to Liam Dwyer and his Freedom Autosport Mazda MX-5 when he co-drove with Tom Long to the Continental Tire SportsCar Challenge ST win in late May at Lime Rock Park.

Now this weekend, at Virginia International Raceway, Liam will be back behind the wheel of the #27 Freedom Autosport  Semper Fi Fund Mazda MX-5, this time teamed with Randy Pobst, who has already scored two wins this season.  The two-and-a-half hour race will start at 2:00 pm (Eastern) on Saturday, August 23.  Mazda will be broadcasting LIVE on-board footage from the Dwyer/Pobst car on the Mazda YouTube channel at  www.youtube.com/mazda.

Liam Dwyer lost the lower portion of his left leg when he stepped on an IED in Afghanistan in May of 2011.  After 50+ surgeries, and being told he would never drive a manual transmission car, Liam never gave up.  The Freedom Autosport  team devised a quick release mechanism such that Liam’s leg is directly connected to the clutch pedal, but can be disconnected for a driver change, or if he needs to escape quickly from the car.  For 2014, a three-race schedule was developed to get Liam up to speed with the car and the team.

“VIR is one of a few balanced tracks the Continental Tire Series races on," Dwyer said. "There are long straightaways for the cars with power, but a lot of technical and heavy braking areas where the Mazda MX-5 will really shine.  For this race we tweaked the driver line-ups a bit where I will not be driving with Tom Long, instead I get the pleasure to drive with one of my racing heroes, Randy Pobst.  I am very excited for this opportunity as I've watched Randy as a child/teenager race.  Randy is extremely fast and already has two wins to his credit this season with Andrew Carbonell.  My plan is to get the car setup to where he will be comfortable in it, and give him the car hopefully up towards the front of the field where he can bring home another win.”

“When we first met Liam, we knew this was an opportunity to add a great driver to our team, " said  John Doonan, Director of Motorsports for Mazda North American Operations. "But more importantly, it’s led to us to making plans to open the door for more members of the Armed Forces to get involved in motorsports as crew members.  The Freedom Autosport partnership with the Semper Fi Fund has made this an ideal match for everyone.  These first three races in 2014 are hopefully a preview of a full season in 2015 with Liam.”

I'm very pleased to join with a man who has become a hero of mine for his positive can-do attitude and our shared love for motor racing," said Randy Pobst. "It is an honor to be teamed with a Marine as Freedom Autosport supports the Semper Fi Fund for injured Marines and their families.  Liam and I will provide Mazda with yet another shot at the VIR win, where the beginning and ending track segments will suit our MX-5 Miatas very well.”