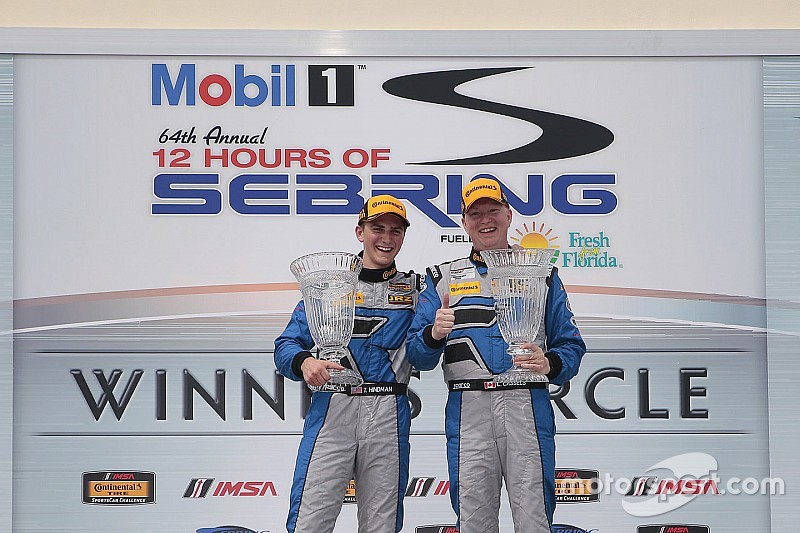 It was the first race in a Porsche for Hindman, the 2014 GS champion, while Cassels won in his second IMSA start. The No. 12 Bodymotion Racing Porsche was not quite ready for the season opener at Daytona in January.

“Never in a million years did I think we could pull off a win in the first race for our new Clubsport,” said Hindman, who passed Matt Plumb for the lead exiting Turn 17 with 27 minutes remaining before pulling away to score his fourth career triumph. “We have to keep our foot on the gas and hopefully we can keep this result going forward.”

TOTAL Pole Award winner Scott Maxwell and Billy Johnson – winners of the season-opening race at Daytona – took second in the No. 15 Multimatic Motorsports Ford Shelby GT350R-C, finishing 13.484 seconds behind the No. 12 Porsche. Plumb ended up third in the No. 13 Rum Bum Porsche 911 started by his brother Hugh.

Running “under the radar” throughout the race weekend, Owen Trinkler took the Street Tuner (ST) lead with 55 minutes remaining and cruised to victory in the No. 44 CRG-I Do Borrow Honda Civic Si started by Sarah Cattaneo.

The most experienced female driver in Continental Tire Challenge competition with 67 races, Cattaneo joined Ashley Freiberg as the leading female winner in series history in taking her second victory. She won her first race at New Jersey Motorsports Park in 2011 co-driving with Trinkler in a Mini Cooper. Trinkler, second on the list of all-time races with 119 starts, scored his sixth career victory and first since 2012 at New Jersey Motorsport Park in a Honda.

“We were under the radar all week, and we barely cracked the top five at any time,” Trinkler said. “It was all about being consistent. We worked all week concentrating on longer runs on older tires, and if you look back at the lap times, you’ll see our car barely moved a second all weekend and during the race.”

The race was slowed only once by full-course caution when Sam Adams went off in Turn 17 with one hour, 17 minutes remaining in the No. 7 Rebel Rock Racing Porsche Cayman. The final lap saw Mark Pombo lose the brakes in the No. 37 MINI JCW, and impacted a barrier after hitting Valiante in the door. Pombo escaped without injury, while Valiante held on to finish second.