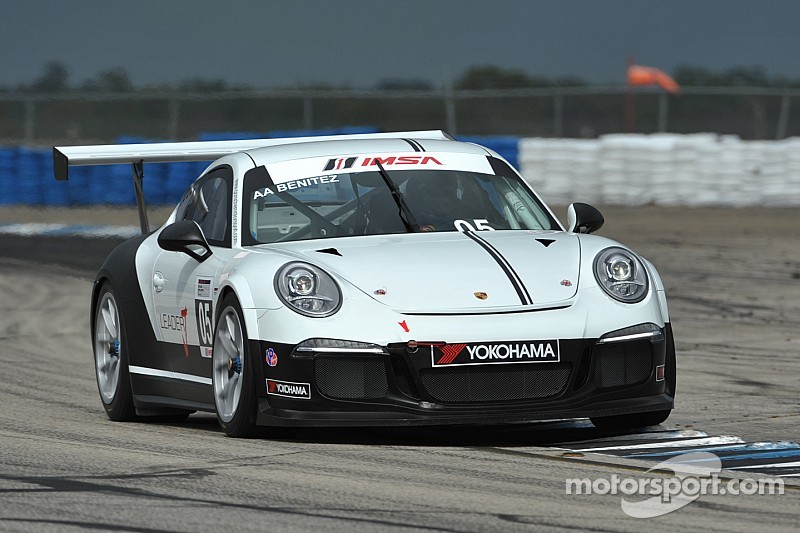 Three drivers have a shot at the title.

That's the championship equation with 45 minutes of competition remaining this season in the Porsche GT3 Cup Challenge USA by Yokohama after Angel Benitez Jr. (in photo) won Round 15 on Thursday, Oct. 2 at Road Atlanta.

Benitez, from Valencia, Venezuela, kept his title hopes alive with his series-leading fifth victory of the season in the No. 05 Formula Motorsport/Avid Motorsport Porsche. He made a breathtaking late-race pass of new championship leader Michael Lewis and pulled away from Lewis' No. 98 Competition Motorsports/Curb-Agajanian 911 GT3 Cup car to win by .961 of a second.

The other remaining title challenger, Colin Thompson, finished third in the No. 14 Kelly-Moss/Porsche of Bucks County entry. Lewis leads Thompson by one point, 235-234, in the Platinum Cup championship. Benitez is third, seven points back with 228.

"I took a chance, made a pass before Turn 11, and we have the victory," Benitez said. "We really work hard for this. I know everyone is working hard to be here, but we really wanted to be here to continue winning and making people proud. I would like to dedicate this to my grandfather, who passed away two weeks ago, and thanks to my father, my uncle and all my family who have been here.

"I'd also like to say thank you to Porsche, IMSA, Yokohama and all those who make this possible. There's one more race for the championship, and I think we have a good chance."

The season-ending Round 16 will start at 11:25 a.m. (ET) Friday, Oct. 3. Live streaming video and live timing will be provided at gt3cupchallenge.com. Live text commentary will be provided on Twitter at @IMSALive.