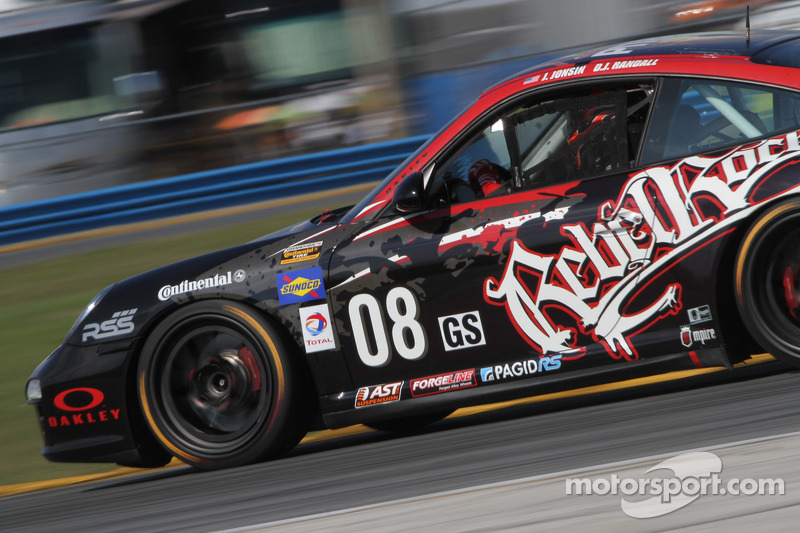 The Rebel Rock Racing boys are ready to take on Kansas!

Coconut Creek, FL (June 4, 2014) – Following the last Continental Tire SportsCar Challenge event raced two weeks ago at Lime Rock Park, Rebel Rock Racing team owner Jim Jonsin and his executive technical team have been thinking and working on solutions to make their Porsche 997s faster for this next round in Kansas. The four Rebel Rock Racing drivers, Al Carter, Brett Sandberg, Kyle Marcelli and Martin Barkey who will pilot the two Rebel Rock Porsches in the GS class for the overall victory are confident that Kansas is going to be a good event for them and the entire team has its goal set to score their first podium finish of the season.

In Lime Rock the four Rebel Rock racing cars had mixed results but on a more favorable track for the Porsche than the previous race at Laguna, the relative performance of the Rebel Rock cars improved and the team scored its best collective finish to date. The team and drivers are encouraged to see that both GS cars set a string of lap times very competitive with the race winner and the team feels their approach of doing a little at a time, for reasons that they understand, is paying off.

The No. 7 Rebel Rock/B+ Foundation/Caramba Tequila/Eagle Tech Systems/Sideskinz/Stinkerz Porsche co-driven by Carter and Sandberg finished 13th after a tough Lime Rock race. Brett Sandberg ran as high as 5th before pitting and made an excellent pass during his stint on the car that would ultimately win the race. Making both stops under green unfortunately put the No. 7 car two laps down. Nevertheless, Al Carter had an excellent stint too but was not able to finish higher than 13th because of the time lost pitting under green.

The No. 08 Rebel Rock/MBRP Inc. Performance Exhaust/K&N/The Sports Lab/Vitargo/The Garage/Jackson Transportation Systems/GO PUCK/All Ontario Recycling Porsche of Canadians Kyle Marcelli and Martin Barkey finished 12th continues to gain experience in the No. 08 and was able to race well against the other non-full time pro drivers. Kyle Marcelli had a decent Lime Rock race too, frequently lapping faster than the leader.

Rebel Rock Racing will have two ST cars in Kansas. The No. 87 will be co-driven by Charles Espenlaub and Corey Lewis and the No. 88 Rebel Rock/Ingersoll Rand /Monticello Motorsports Park /Joe Gibbs Driven/SMS Audio/Oakley /Western Star/Alliance Truck Parts Cayman ST by team owner Jim Jonsin and a newcomer to Rebel Rock, Tom Dyer.

Charles Espenlaub and Corey Lewis behind the wheel of the No. 87 car should make a very competitive duo and they too are looking to score the first Rebel Rock Racing ST podium finish. On Thursday before the race event starts, Al Carter and Rebel Rock teammate Corey Lewis will visit children battling cancer at Children's Mercy Hospital in Kansas City. This is the second year that The B+ Foundation organizes this “B+ Fighting Childhood Cancer Tour” event in Kansas City and thanks to the Kansas Speedway that this year donated tickets for the race, some of the children and their families will be guests of Rebel Rock Racing on race day and hopefully will be able to visit the podium with their favorite drivers at the end of the race.

Jim Jonsin No. 88 Porsche Cayman (ST class): "It's been a short break between Lime Rock and Kansas but it feels like a lifetime, Corey Lewis and I had a bad break at Lime Rock, we were out on the first lap, I got jammed up in a crash in turn one that took our 88 car out of the race, I'm looking forward to Kansas, The Rebel Rock Crew has been hard at work getting these bad ass Porsche ready and we have just the driver lineup we need to execute a great victory.”

Tom Dyer No. 87 Porsche Cayman (ST class): "I'm super stoked to be joining the Rebel Rock Racing organization for Kansas. I've had a chance to work with Jim some over the years. I am looking forward to now being able to do so as teammates! He has worked tirelessly to grow this effort and it’s clearly evident by the growth of the team. I also look forward to working with the team to help develop and grow the Rebel Rock brand on and off the race track. This is a great opportunity."

Al Carter No. 7 Porsche 997 (GS class): “"We did not get the result we deserved at Lime Rock but I am looking forward to Kansas. Our No. 7 Rebel Rock Porsche will be fast. On Thursday we will visit the kids batting cancer at Children's Mercy Hospital in Kansas City with The B+ Foundation and I am happy that some of them will join us with their families on Saturday night for the race."Brett Sandberg No. 7 Porsche 997 (GS class): “We had a strong race car at Lime Rock, unfortunate yellow flag conditions put us a lap down and therefore out of the race. I am looking forward to getting back in the Rebel Rock Racing Porsche this weekend at Kansas Speedway. This will be my first time at this venue, looking forward to learning the new track!”

Kyle Marcelli No. 08 Porsche 997 (GS class): "As a new team we continue to develop and improve in procedure and speed. I trust that Kansas will again showcase a step forward and a step closer to the podium. I’m looking forward to giving my best in the No. 08 Porsche with Rebel Rock Racing.”

Martin Barkey No. 08 Porsche 997 (GS class): “Turn left ... go fast.... The Porsche is well suited for this big track, looking forward to a great race weekend with the RRR team.”

Charles Espenlaub No. 87 (ST class): “Looking forward to getting back with Rebel Rock at Kansas Speedway. Rebel Rock has put together a great team and is starting to hit their marks. So, a great result is only a matter of time. Miles Maroney was leading at Laguna Seca and had the pace for a podium. Being paired with another excellent co-driver Corey Lewis, I am excited for another run at the podium.”

Corey Lewis No. 87 (ST class): “Going into Kansas race weekend, I am more determined than ever to get the solid results that we deserve. Our Monticello Motor Club/ Rebel Rock Racing Porsche Cayman will be strong for this track configuration.”

Rebel Rock Racing Technical Director Ron Mathis: “I am looking forward to Kansas. The faster the track, the better the Porsches like it and Kansas Speedway is very fast. Rebel Rock's cars and procedures are getting better every race. We'll be looking good this weekend".