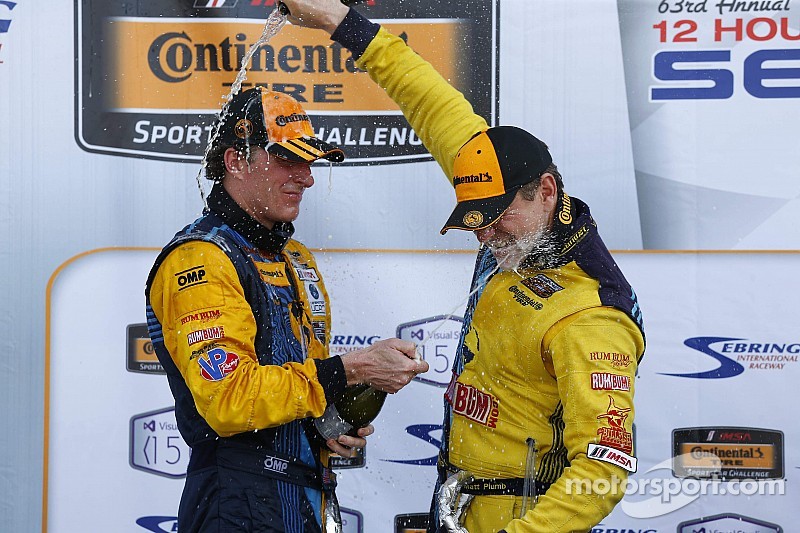 Sebring, Fla. – Rum Bum Racing continued its championship momentum at Sebring International Raceway on Friday as Hugh Plumb and Matt Plumb combined to take third at the iconic Florida road course. The event marked Round 2 of the IMSA Continental Tire SportsCar Challenge and after claiming victory in the opening round at Daytona, Luis Bacardi’s Rum Bum Racing team remains well positioned in the 2015 championship standings.

It took a mix of strategy, teamwork, and hard driving to deliver the podium performance and there was a big crowd of supporters on hand as Jennifer Bacardi and her family celebrated with the team following the race.

Hugh Plumb opened the event after qualifying the No. 13 Rum Bum Racing Porsche fifth on the grid for the 2.5-hour race. It was a hot and balmy Florida afternoon which made for some brutal conditions behind the wheel of the racecar. But undeterred by the heat of the day, Hugh Plumb drove a strong first stint before handing the car over to his brother Matt

Plumb with just under an hour remaining

When Rum Bum Racing called Matt Plumb to pit lane for the team’s final pit stop under green flag conditions, he had made his way up to third in the running order. The squad made quick work of adding fuel and tires to the No. 13 Rum Bum Racing Porsche and Plumb returned to the fray 13th in line.

In traditional Matt Plumb fashion, he wheeled the Porsche all the way up to third in the final segment and developed a significant gap over fourth place. Despite pushing the Porsche to its limit, the 3.74-mile Sebring road course favors the V8 machines of the Stevenson Camaros who ran 1-2, and the No. 13 Porsche was unable to catch them with Matt Plumb taking third at the checkered flag.

“Congrats to Stevenson Motorsports - they are a professional team and they’ve got great drivers, there’s no reason they shouldn’t finish 1-2,” said Team Manager and driver Matt Plumb. “I would have liked to be a little bit closer to them in the end, but it’s alright, we’ll get them next time. The team was flawless and the car ran perfectly.”

“Once again we did everything we could do given what we have,” echoed Hugh Plumb. “The Rum Bum Racing guys (crew chief) Joe Varde, Matt (Plumb) and (Technical Director) Nick Longhi, once again just did an awesome job. We just didn’t have the overall pace that the Camaros did. I’m so happy for the team, a first (at Daytona) and a third, what more can I say? The Bacardi family makes this possible. My thanks goes out to them for making this happen, what a great opportunity for me.”

Next up, Rum Bum Racing will travel across the country to California for Round 3 of the IMSA Continental Tire SportsCar Challenge championship at Mazda Raceway Laguna Seca which takes place May 2.

Rum Bum Racing fans can catch the Sebring International Raceway event on FOX Sports 1 at 9:00 AM ET on Sunday, April 5.