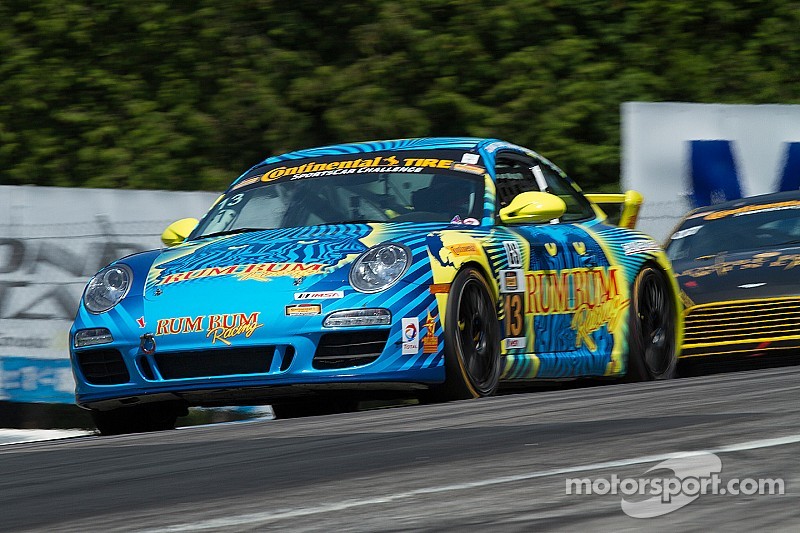 When Rum Bum Racing entered Round 7 of the IMSA Continental Tire SportsCar Challenge at Canadian Tire Motorsport Park, the team knew it had its work cut out for them.

But Rum Bum Racing was ready to rise to the challenge and used the typically prudent Joe Varde strategy to the best of their ability in order to make up ground in the race. The team’s strategy nearly worked out perfectly for the Rum Bum Racing squad, but an ill-timed caution period saw the team unable to capitalize on track position. The group came home ninth in the end, but not for lack of effort.

Nick Longhi started the race from 14th on the grid and moved up to 11th during the opening run as he kept the No. 13 Rum Bum Racing Porsche clean through the traffic of 47 cars on track. When the strategy call came for Longhi to pit just 37 minutes into the race, he took to pit road for a routine stop of fuel and fresh sticker Continental Tires, and handed the car over to Matt Plumb.

Plumb emerged 20th in the order and a lap down to the leaders. Right on the tail of the second place Camaro of Matt Bell, Plumb drove hard in an attempt to get his lap back. Unfortunately, the race went under full course caution before Plumb could work his way ahead of the leading Camaro machines and he was forced to wait for the “wave by” under the caution which would return him to the lead lap.

Once the No. 13 Porsche was allowed to pass the pace car and return to the lead lap under yellow, the race was about to go back to green. Plumb hustled the Porsche to its limits as he tried to catch back up to the rear end of the GS field, but the race went green while he was still among the ST class field in 18th place in class.

Plumb steadily worked his way forward through a green flag run and pitted with 54 minutes remaining in the race for left side tires and fuel. He returned to the track 15th in line in need of a yellow flag to bunch the field back up.

That full course caution came with 50 minutes to go and Varde radioed to the team that they were “back in the ball game.” Once several of the other competitors had made their final pit stops under the yellow, Plumb found himself restarting from the ninth position. The race went back to green for about seven minutes and Plumb had worked his way forward into the seventh position before another full course caution slowed the field.

A final restart came with less than 20 minutes to go and as Plumb fought for race pace, he slotted into eighth through the final laps. It looked like Plumb would take eighth at the checkered flag until contact just ahead of the No. 13 Rum Bum Racing Porsche in the final corner saw the Porsche machine hit from the side and forced into the inside concrete wall. Plumb limped the damaged car across the finish line to earn ninth place points.

“I came out (after the first pit stop) a lap down on four sticker tires and I couldn’t get by the Camaros who were racing on 40-lap old tires, so that was a bit depressing I have to admit,” said Plumb. “We’re fighting an uphill battle right now, but we’re trying to just get as many points as possible as we can right now. We’re still in this championship and we’re going to fight hard in every race from here on out. Joe Varde always has the right strategy calls and today we just got a bit unlucky. But we’ll go on to the next one and work just as hard as we did this weekend.”

“Had there not been that ill-timed yellow, we were looking pretty good,” added Longhi. “Matt (Plumb) drove the wheels off of the car. We just tried to minimize the damage in the uphill battle we have with the rules and the extra weight of the car. The Rum Bum team performed flawlessly today and we did the best we could with what we had.”

Rum Bum Racing will be back in race action at Indianapolis Motor Speedway in two weeks. The Canadian Tire Motorsport Park event will be televised on FOX Sports 1 Sunday, July 20 at 10:00 AM ET.