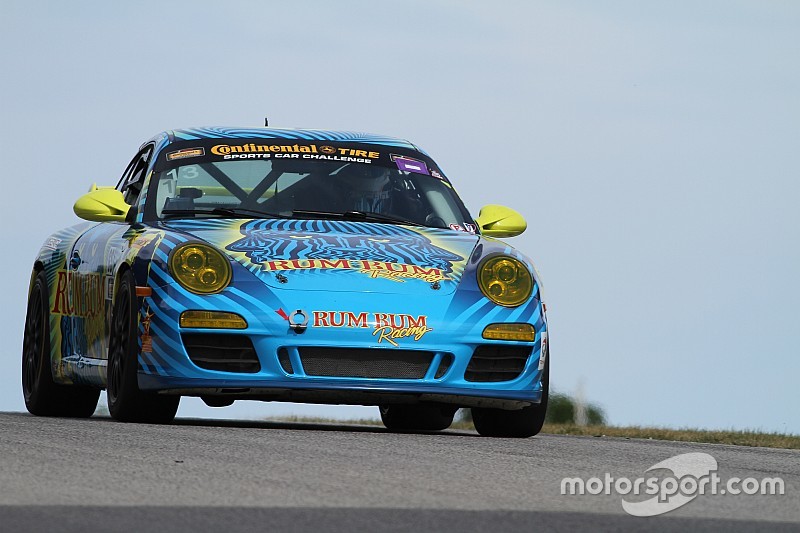 Pumpelley in RS1 Cayman runs out of gas two turns from an ST class victory.

While brothers Hugh and Matt Plumb had enough gas to win the GS class and take the overall victory in the RumBum Racing Porsche 911, Spencer Pumpelley’s RS1 Porsche Cayman rolled to a stop within sight of the checkered flag, handing the ST victory to the Honda of America Honda Civic Si of Ryan Eversley and teammate Chad Gilsinger.

Pumpelley took over from Luis Rodriguez, Jr. and drove the Porsche Cayman to the front, and had more than a one-second lead on Eversley, but lost power with two turns remaining. Eversley finished .766 seconds ahead of Owen Trinkler and Sarah Cattaneo in their CRG Honda Civic Si. Third in ST was another Cayman, the Murillo Racing car shared by Jeff Mosing and Eric Foss.

“Pumpelley was in a zone,” said Eversely. “If he hadn’t run out of gas we’d have been racing for second.”

The RumBum drivers had something to prove after a controversial crash at the last race, at Lime Rock Park in Connecticut, knocked them out of contention. This win wasn’t easy, though – the second-place Doran Nissan 370Z was just .314 seconds back at the finish, driven by a hard-charging B.J. Zacharias, who shared the car with Brad Jaeger.

Third in GS and overall was the Fall-Line Motorsports BMW M3 driven at the end by Trent Hindman, who shared driving duties with Ashley Freiberg. Fourth was the other Doran Nissan 370Z, driven by Nissan Nismo GT Academy driver Nicholas Hammann, with Steven Doherty taking the second shift.

“We had a good pace from the beginning,” said Matt Plumb, who drove the RumBum Porsche to the checkered flag for his 21st win, a series record. “But I knew the Nissans had a very good chance of overtaking us once they were clear of traffic,” and they did, but they couldn’t close the deal.

Steady rain on Friday washed out qualifying for the race, so the No. 6 Stevenson Chevrolet Camaro Z/28.R, driven by points leaders Robin Liddell and Andrew Davis, started on the pole for the Grand Sport class, and Chad McCumbee and Stevan McAleer, drivers of the No. 5 C.J. Wilson Racing Mazda MX-5, started at the front of the Street Tuner class because of their top points position.

Liddell and Davis finished fifth, the best result of the three Camaros – along with the two Multimatic Ford Shelby Mustang GT350R-C, those V8-powered pony cars have dominated much of the season, but seemed outclassed on the four-mile Road America track in the two-hour, 30-minute race by the Porsche, Nissan and BMW entries.

Next up for the Continental Tire SportsCar Challenge: August 22 at the Oak Tree Grand Prix at Virginia International Raceway.

PROBERT HEADED HOME: Continental Tire Challenge driver Tim Probert was admitted to Froedtert Hospital in Milwaukee with fractured ribs on his left side following a hard crash in in practice on Friday morning in his No. 65 Murillo Racing BMW 328i. He was kept overnight, and Saturday morning, headed home to Houston, Texas. The car was withdrawn, leaving today’s starting field with 41 entries.

ACTION EXPRESS BACK FOR 2016: Defending TUDOR United SportsCar Championship Prototype champions Action Express Racing announced at a press conference Saturday at Road America that their two-car team will return for 2016 with no major changes.

The No. 5 Mustang Sampling Chevrolet Corvette DP, driven by 2014 champions Joao Barbosa and Christian Fittipaldi, and the team No. 31 Whelen Engineering Corvette DP driven by Eric Curran and Dane Cameron, will continue with those drivers behind the wheel next season.

Along with engines built by ECR, which supplies some NASCAR Sprint Cup teams, the cars will continue to use Coyote chassis in 2016, which is the final year for the current configuration for Prototype cars.

In 2017, Prototype teams will use chassis manufactured by one of four approved manufacturers. Team Manager Gary Nelson, a championship-winning NASCAR crew chief before shifting to sports cars, said he wasn’t ready to commit to one of the new chassis until he’s heard more about the 2017 rules package.

IMSA LITES: Kenton Koch held off Matt McMurry in second and Clark Toppe in third for race number nine in the Cooper Tires Prototype Lites Powered by Mazda series, which ran before the Continental Tire series race Saturday at Road America. All three drivers race for the JDC Motorsports team. John Falb, who finished fourth overall, was tops in the Masters class. Race 10 is Sunday.