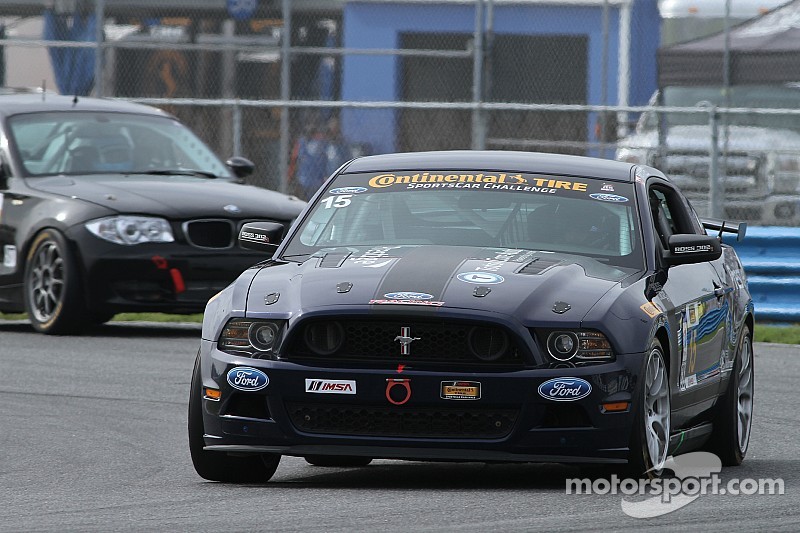 Bryan Ortiz put the new Zero Zero Motorsports team atop the chart on Sunday, running a lap of one minute, 57.963 seconds (108.644 mph) in the No. 00 Ford Mustang Boss 302R shared by co-driver and team owner Roly Falgueras.

“It’s good to be here and help shake the rust off,” said Ortiz, a regular in the Continental Tire Challenge before competing in stock cars as part of NASCAR’s Drive for Diversity program from 2011. “Roly’s last race was here in 2013, and this test will get us off to a good start.”

Fastest in ST during the Roar test was defending ST champion and Daytona winner Eric Foss, running 2:05.278 (102.300 mph) in the No. 56 Murillo Racing/Mosing Motorcars Porsche Cayman co-driven by Justin Piscitell.

• After racing an Aston Martin Vantage in 2014, Mantella Autosport brought a pair of Chevrolet Camaro Z/28.Rs to the Roar in preparation for a full two-car season. The team used the Roar to work out teething issues with the unfamiliar cars, including minor problems with the driveshaft. “These are very different cars to work with, but the cars are engineered by Pratt & Miller and most of the problems are ironed out,” said owner/driver Anthony Mantella. ”Being here for the Roar gets us ahead of the game a little bit.” Mantella will join Mark Wilkins in the No. 8, with Martin Barkey and Kyle Marcelli in the No. 80.

• Jim Click Racing stepped up its approach for the 2015 season, adding crew chief Jeff Campey and other new talent. Campey has more than 20 years of experience with Roush Racing, dating back to the 1990s, working with both sports cars and stock cars. The team worked the Roar in partnership with Roly Falgueras’ Zero Zero Motorsport. Campey served as crew chief for Falgueras with Roush Racing in the 1995 Rolex 24, when they finished fifth in class.

“We’ve introduced a lot of new people to the team for this year, and the test really worked out well,” said driver Mike McGovern. “Getting the right car and the right equipment makes all the difference in the world – like any team sport. It makes my job a lot easier.” McGovern explained that the team skipped last year’s Roar and then struggled when it came to Daytona for the BMW Performance 200. “Being here this year gives us more of an upper hand.”

• The next activity for the Continental Tire Challenge will be on Wednesday, Jan. 21, with a pair of one-hour practice sessions at Daytona International Speedway beginning at 1:30 p.m. ET. The season-opening BMW Performance 200 will be held on Friday, Jan. 23, with the two-hour, 30-minute race taking the green flag at 1:45 p.m. ET.

Jon Mirachi, Owner, Racers Edge Motorsports: “All of our cars ran well, and the drivers are very comfortable with both the track and the team. This Roar was important because we were able to get our setups all dialed in and the brakes turned up and ready. This is the most cars we’ve ever brought to Daytona in the Continental Tire Challenge, and we’ll be ready to hit the ground running for the opening practice session. That’s important, because at Daytona we get more limited track time than most of the other races.”

James Clay, Driver of the No. 84 BimmerWorld Racing BMW 328i and Owner of BimmerWorld Racing and its new satellite team, Next Level European: “Everything here ran very smoothly. We have a lot of consistency with the team. Our new cars were built by BGB. We feel they’re the best in the business, and they have a product that’s ready to run. We have continuity with the team, including our staff and drivers, so the test couldn’t have gone smoother. Greg (Liefooghe) was fast right out the box in the Cayman, that shows the car was delivered right. We have had plenty of time to develop our (BMW) F-30s, and we’ve come a long way with them.”

Jim Jonsin, Owner/Driver, Rebel Rock Racing: “Coming to Daytona is always an experience. As a team owner, it’s hectic, making all the arrangements, working with drivers who may be here for the first time. As a driver, I set my fastest ST time here this weekend, so that’s a big plus for me. Daytona is one of my favorite places to drive, and I’m getting better and better here. As a fan, it’s always great to see all the new cars. Having Erik Valdez on the team is great. He loved racing in the rain once he got going. He’s very charismatic. I think he and I will become ‘mayor’ and ‘governor’ of the paddock sooner or later.”

Greg Liefooghe, Driver, No. 83 Next Level European Porsche Cayman: “We got some good data this weekend. The car ran every lap of every session, and we couldn’t be happier with the results.”

Keith Burton, Owner, Burton Racing: “In 2012 we started and ran half of the race in the rain. That’s why we decided to run the full afternoon session today. You can learn a lot, even on a wet track. We split the session between Terry (Borcheller) and Mike (LaMarra). We wanted to get a read on the car in the heavier rain.”