Nick Longhi will start Friday’s Sebring 200 from the seventh row after posting a fast lap time of 2:17.212-seconds at Sebring International Raceway in Thursday’s qualifying session. The race, which marks the second round of the 2014 IMSA Continental Tire SportsCar (CTSC) Championship.

Longhi will open the 2.5-hour race from behind the wheel before turning the controls on the No. 13 Rum Bum Racing Porsche over to Matt Plumb to take to the finish. 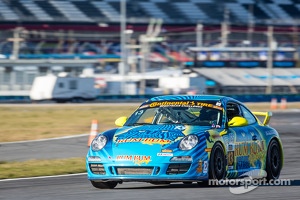 The qualifying result was far from satisfying for the team, but the focus is on the race finish as the group looks to bounce back after a disappointing day at Daytona to start the season. Rum Bum Racing won the 2012 and 2013 IMSA Championships and is targeting a return to the top of the charts as the season prepares to pick up momentum.

“We fought through a few issues this week, and are just not where we need to be yet,” said Longhi. “It is a bit frustrating not to have the speed that this team is capable of. But we’ve used strategy to win races before and hopefully we can do that again. Tomorrow’s race will surely be a bit chaotic, as Sebring is a very tough track and no one knows what to expect. But what I expect, what what we’ve seen before, is that this team will just keep focused and work our way forward tomorrow.”