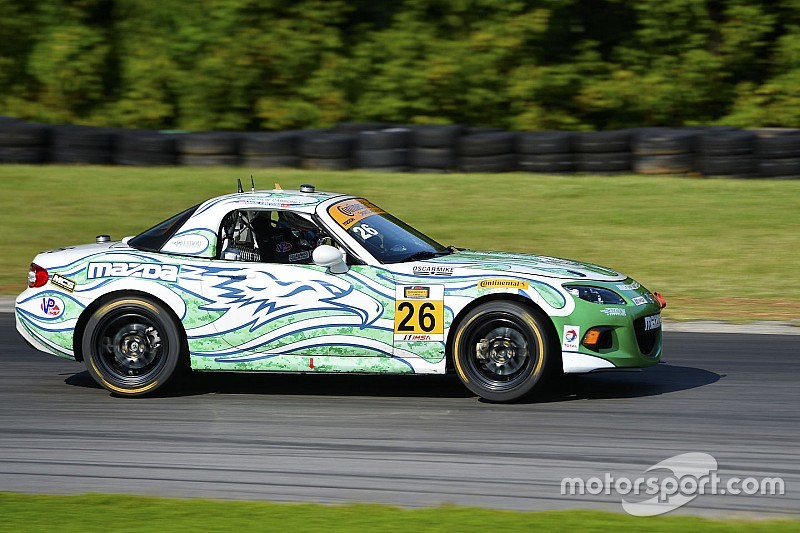 During the 2015 season, the on-track competition between the duo of McAleer and McCumbee and Freedom’s Dwyer and Carbonell was fierce, as they battled all year for the ST championship. Now, those competitors are teammates as McAleer and McCumbee move into the No. 25 Freedom Autosport ModSpace Mazda MX-5. ModSpace provides permanent modular construction solutions, which can be up to 50 percent faster than traditional building.

McAleer said, “It’s quite exciting for us with Freedom Autosport being the competition for the last three years. We’re excited about our continued partnership with ModSpace, and I’m really looking forward to the season. Liam and Andrew are good friends of ours, and for a combined effort this year we’ll have a really strong lineup.”

“We’ve always competed against Freedom Autosport,” said McCumbee. “I know they put a top quality product out there, and being able to drive for them this year, I hope we can repeat the championship,”

“ModSpace is excited to partner with Mazda for the fifth season in the IMSA Continental Tire SportsCar Challenges Series,” stated William Mann, Vice President of Motorsports for ModSpace. “We look forward to the 2016 season with Freedom Autosport carrying the ModSpace brand, and are thrilled to have Chad [McCumbee] and Stevan [McAleer] back behind the wheel. ModSpace couldn’t ask for a stronger driver lineup. Both drivers are great ambassadors of our brands on and off the track. After being crowned ST class champions in the Continental Tire Series last season, they began preparing for this upcoming year.

“ModSpace believes we have the perfect combination with Mazda, Freedom Autosport and our drivers to deliver a strong performance at Daytona and carry that momentum throughout the 2016 season. We are also proud to have our partners at Premier back onboard and we welcome a new partner in Spartan Trailers.”

Carbonell and Dwyer return to the No. 26 Freedom Autosport Mazda MX-5 for their second season as co-drivers. Carbonell said, “I’m really happy to be back with Freedom Autosport and Mazda this season. It’s exciting to know we’re coming back with a strong team. Liam and I had a solid season last year, and now we get to build on what we learned in 2015. It will be great for the both of us, and we’ll be able to step up.”

While Dwyer is optimistic about the season, he also notes that the team has to take one race at a time. “Andrew and I had a very good working relationship last year and developed a friendship. I see that getting better this year – if two new teammates could almost win the championship last year, imagine what we can do with a season under our belts. We hope to get a good finish at Daytona: you can’t win the championship at Daytona, but you can sure lose it. We’d like to thank our sponsors for this year: Mazda, OG Racing, and Arai Helmets.”

Britt Casey, Jr. and Danny Bender, who both drove with Freedom Autosport in 2015 at select rounds, will be teaming up for a full season in the No. 27 Freedom Autosport Trumpf Mazda MX-5. Trumpf is the largest manufacturer of fabricating equipment and industrial lasers in North America, offering solutions in sheet metal processing, laser-based production processes and electronic applications.

Casey drove five rounds with Freedom last year, with a best finish of second at Mazda Raceway Laguna Seca. Bender co-drove with Casey at Road America, where they finished tenth. The two Illinois residents have known each other since Casey, now 18, was about 12 years old.

“I’ve known Danny since before I was driving cars – when I was still racing go-karts – and we both cut our teeth in club racing. It is exciting to have met at the beginning and then to be together again here at the professional level,” said Casey.

Bender is both a racer and a Mazda salesman: he works at Autobarn Mazda of Evanston, near Chicago. He said, “I get to drive with someone I know and trust, which, for any driver pairing, is big. My personal goal this season is to progress as a driver. This is my first full season in the series, and I’m looking forward to working with Freedom Autosport.”

“We’re excited to have such a strong driver lineup for the 2016 season,” said team co-owner Derek Whitis. “We hope that the combination of talent and proven teamwork will help Freedom Autosport deliver another championship for Mazda. Chad and Stevan are a great addition to our team, and Freedom Autosport is looking forward to a successful season.”