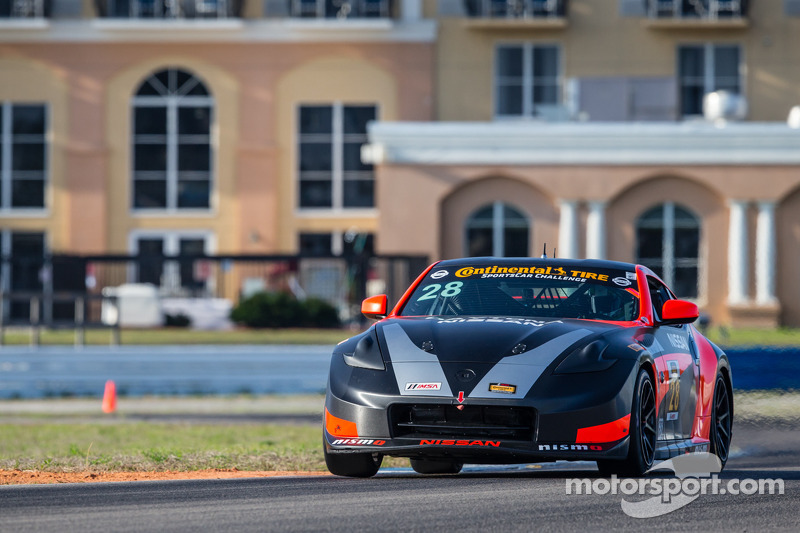 Monterey, Calif. (6 May 2014) – The box score from the Continental Tire Monterey Grand Prix at Mazda Raceway Laguna Sea will show a fourth place result, but it won’t come close to demonstrating the progress that Tim Bell Racing has made so far this year.

Coming together just before the opening round of the 2014 IMSA Continental Tire Sports Car Challenge season, Tim Bell Racing acquired a previously-raced Nissan 370Z Nismo, signed Dane Cameron and Tim Bell to race the car, and headed south to daunting Daytona International Speedway. The team experienced the expected hiccups and setbacks that a new team with a new car has to endure to find their footing and build a foundation.

Both rounds saw equal measures of both encouraging pace as well as some frustrating mechanical setbacks. Making the most of the nearly six week break between events, Bell continued to work on both sides of the pit wall, evolving the team structure while also giving the group the chance to develop as a team and also improving on the potent Nissan 370Z Nismo platform.

All that hard work and testing paid off on Saturday as Bell and Cameron combined to take fourth place finish at Bell’s home track. Having lost the final podium position in the closing hundred feet of the race, the result had some “what might have been” feeling, but it was also a strong demonstration of the progress that the young team had made in such a short time.

“We made a lot of changes to the team and a lot of changes to the car and had a lot of testing in between here in Sebring,” said Bell. “Dane and I have been practicing every chance we can get. It definitely paid off this weekend for sure. We were sitting P3 for a while, we're happy with P4, but P3 would have been a lot better! We're happy - it's a great result for our third race. We're beating some teams that have been doing this for years. It's a great feeling knowing that everything came together. Unfortunately that Aston has tons of power on us but we'll bring it to him next time.”

“I think it's really frustrating to lose the first podium finish for the team in the last few hundred feet of the racetrack,” said a philosophical Cameron. “But if you had told everybody three weeks ago we were going to finish fourth today, we would have been very happy with that. I think we can be really happy and really proud with how much we've progressed - from being not within a second all year and not finishing on the lead lap to being good on pace and running in the top three competitively - we worked our way there and we drove our way there. That's really, really encouraging. So really proud of everything that Tim has done, Davy and the whole team, giving us a good reliable car and a fast car too. We were a bit short on fuel; we were just hoping, hoping, hoping we were going to make it and just barely made it. A good performance; hopefully we can build from here and make this a regular thing.”

The team will be back in action on Memorial Day weekend as part of the classic Lime Rock Park event.