The signings are a source of pride for Team Principal Karl Thomson. "I've had the pleasure of racing against both of these drivers," he remarked. "Pat and I competed in Canadian Touring Car for a couple of years, while Jon was our team's main competition in World Challenge last season. Both guys have run Hondas on their own and we think they'll be a strong combination, as I know both are hungry for success in this super-competitive IMSA series."

Indeed, both drivers bring talent and pedigree to the team. Miller comes off a strong run in WC's Touring Car division where he finished fourth in 2013, the first driver behind three C360R full-season entries. "Jon had a great season last year, and we've had our eye on him for the past few years," noted Thomson. "Not just in the Honda but also in a GS-class Porsche a few years ago. Jon's had a lot of experience in everything from street stock cars to IMSA Lites and we're looking forward to finally having the chance to work with him. He's fast, smart and has proven race craft that will put him in a good position in the closing stages of the always-competitive Street Tuner races." 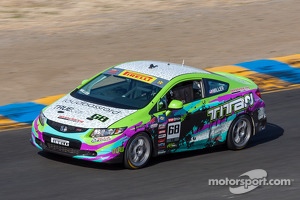 The signing of Seguin is personally satisfying for Thomson. "I've known Pat for a long time. He's an up-and-coming Canadian talent, and it means a lot to me that we've finally been able to put all the pieces together to have him drive with us." Seguin brings primary sponsorship from Nutrimind and ViSalus, thanks to the efforts of Enrico Valente's Podium Special Events Marketing, Seguin's agent and manager. "We are proud to be with Karl and Compass360 Racing and will work diligently towards a Championship run in 2014!’’ added Valente.

Taylor Davis, Co-Founder and CEO of Nutrimind said, ""We are beyond excited to be working with Compass360 Racing. We chose professional racing because Nutrimind promotes healthy, long-term focus and can also elevate reaction time. After we had a look at what these athletes endure and saw how mentally/physically demanding these events were… it was a no-brainer."

ViSalus independent promoter Matthew Britt was equally enthusiastic. "We are extremely excited to partner with Pat Seguin, Enrico Valente and Compass360 Racing to provide the highest quality nutrition to the drivers and give them the fuel they need to perform at their best." Dennis Ost, also with ViSalus noted "Our Project 10 Challenge is challenging the world 10lbs at a time and is focused on helping end the obesity epidemic around the globe."

Nutrimind and ViSalus will be represented at the track at every CTSCC event in 2014, using the IMSA paddock as a platform to expand awareness and understanding of their products' unique benefits. "Patrick has been training for the IMSA season, and he has seen substantial benefits in using the Nutrimind and ViSalus programs," explains Valente. "That's the purpose here, to show the real-world application of these natural products with an athlete in real time. Pat has been using various social media platforms, including Facebook, to track his progress, and through our unique Podium BrandLift Platform Strategies, we will help motorsports fans discover the benefits of these terrific products."

Check out Nutrimind-Racing.com and teamPROJECT10.com for details on both sponsors.

"The announcement of Jon and Patrick gives us another strong contender in the Street Tuner class," said Thomson. "Their #74 car, along with the #75 car of Kyle Gimple and Ryan Eversley, form the backbone of our effort to reclaim the ST title." The two Hondas are joined by the team's new GS-class Subaru WRX STi, piloted by Ray Mason and Ryan Winchester, which has already proven to be a fan favourite.

"We are excited by the challenge to move up to GS this year," stated Technical Director Ray Lee, "but ST is where we made our name and we have to be strong there. With the four drivers we've got, we should once again be in the championship hunt."

The IMSA CTSCC season starts soon, with the season opener at Daytona taking place on Friday, January 24th, and will be broadcast tape-delayed on FOX Sports. For details visit http://www.imsa.com/series/sportscar-challenge.