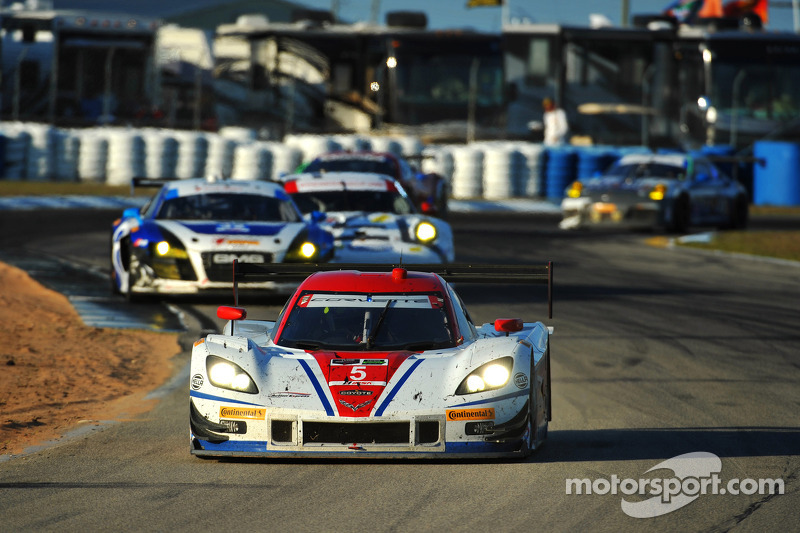 It was the second podium result in as many races for Action Express Racing, which followed up the team’s big Rolex 24-winning effort in January.

Sebring, Fla. – Action Express Racing once again showed its strength in the second round of the 2014 IMSA TUDOR United SportsCar Championship as the No. 5 Corvette DP of Joao Barbosa, Christian Fittipaldi, and Sebastien Bourdais raced their way to third in the Mobil 1 Twelve Hours of Sebring Fueled by Fresh From Florida. It was the second podium result in as many races for Action Express Racing, which followed up the team’s big Rolex 24-winning effort in January. 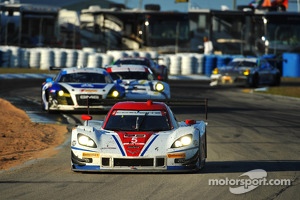 Bourdais claimed the pole on Friday and delivered Action Express Racing’s first-ever pole position as the effort that first started with a test at the track in November continued to deliver results.

Barbosa opened the 12-hour race from the point and led the 64-car field into the history books as the first-ever TUDOR United SportsCar race was staged at Sebring. The No. 5 Action Express Racing Corvette DP immediately gapped the field in the opening laps as Barbosa developed a three-second advantage over second place.

From there, the race went according to plan with Barbosa handing the car to Bourdais who then turned it over to Fittipaldi as the trio rotated through the first half of the race. The No. 5 was a strong contender throughout the event, leading the race for nearly one-third of the laps run.

Another rotation of the driver cycle through the second half of the race saw Bourdais set to take the No. 5 Corvette DP to the finish. After 12 hours of challenging, grueling laps, Bourdais ran second and cut the lead car’s advantage from 19 seconds to seven with great race pace. But a late-race caution changed everything for the No. 5 team.

"Just before that last caution we were feeling pretty good about our chances,” said Team Manager Gary Nelson. "We were running second and had been saving fuel for several hours. We had saved enough to go to the finish with one less stop than our competitors. That yellow would not have changed things for us had it come out one lap sooner or 3 laps later. It just hit at the worst time for us. When you don't get the breaks and still finish on the podium it shows Action Express is a great team. We congratulate Chip Ganassi and his 01 team for their historic win."

In hot pursuit of the second place car of Ryan Dalziel following the restart, Bourdais closed the gap but ultimately took third in the sprint to the checkered flag. The result is the second strong points earning effort for the team, which continues to mark itself as a group to watch.

“I thought it was an outstanding effort,” said Team Owner Bob Johnson. “This team just keeps going and going and going. They've proved it again, they work hard and they get results. I'm very, very happy with the result. We would like to have done better, obviously. But to have a podium finish here at Sebring, quite frankly, is a good result. So, not disappointed in that regard - this is a very tough race. I'm really happy for the guys, for the crew, for the drivers. Everybody just worked hard and got a good result.”

The 12 Hours of Sebring event was expected to be one of the most challenging events on the 2014 race schedule, and it turned out to be even more so for the No. 9 Corvette DP drivers of Burt Frisselle, Brian Frisselle, and Jon Fogarty. Brian Frisselle completed just an hour and 20 minutes of track time after becoming ill during his morning stint and was not cleared by IMSA to compete in the remainder of the race. Burt Frisselle and Fogarty were then tabbed to each triple stint in the car on the very physically demanding circuit.

The duo was up to the challenging task with extra long stints for Fogarty and Burt Frisselle, and the pair stayed clean throughout the race and avoided the vast amount of attrition on the tight confines of the tricky 3.74-mile circuit that saw a record amount of yellows (11) in the 12-hour endurance event. The No. 9 Action Express Racing Corvette DP completed the ‘longest day in racing’ with an eighth place result.

Action Express Racing will now focus forward to the next race which will be held through the streets of Long Beach, California and marks the first sprint race of the season on April 12.

Joao Barbosa, No. 5 Corvette DP: “A third place finish is a great result for Action Express today. We had a very good race. We were always in contention for the win. Unfortunately, the last yellow was surprisingly very long and I really don't know why it was so long. It was all about track position on the restarts. And there was very little time left when we went back to green. Third place is a very good result. The entire team did a tremendous job.”

Christian Fittipaldi, No. 5 Corvette DP: “It was a good points day for the championship. Our lead is a little bit bigger now because the No. 10 car didn't have such a lucky day today. It was a little bit of luck for the Ganassi team, they are an outstanding group of guys but luck went their way a little bit more than it did for us today. The No. 01 car had a very, very strong car. I'll take third and points in the championship and we'll move on to Long Beach. Congrats to Action Express and to Chevy because our car was absolutely flawless.”

Sebastien Bourdais, No. 5 Corvette DP: “I really thought we were stronger in pace than the lead cars on that final restart. I think it looked that way for most of the race. Until they (first and second) showed their hand. There was nothing I could do. That was a bit of a shame but that’s racing. And then the No. 01 cycled to the front after getting that lucky break, they pitted before the yellow flag. Sometimes you need a bit of luck in your hand. We did everything we could. We came in clean. We didn't make any mistakes.”

Burt Frisselle, No. 9 Corvette DP: “It was a tough day. Obviously it’s disappointing that Brian wasn’t able to continue but we’re a team and Jon (Fogarty) and I just did what needed to be done. Triple stinting on a track like Sebring was very difficult but we ran a pretty good race. The team made no mistakes. The car was clean and running well. Action Express Racing put together a good car for us. It was really competitive out there so I’m happy to finish in the top-10 but we would have liked to be a little further up the order today.”

Brian Frisselle, No. 9 Corvette DP: “I’m just really bummed that I didn’t get to compete as much as I would have liked today. After visiting the medical center I felt better and wanted to get back out in the car but IMSA did not clear me to drive. This race is one of the toughest ones we do, but I have to say that sitting on the sidelines was much harder than any of the racing that went on today. That said, it was really special to be a part of this big and historic event and to be here competing alongside my brother and to have both of my parents here with us at a track that has some great family memories.”

Jon Fogarty, No. 9 Corvette DP: “It was a long day. Obviously, Brian (Frisselle) got sick and then the rotation changed so we started pushing our stints longer than we had planned and you lose a guy in the rotation. In that aspect it's challenging. But this course and this race is challenging. The level of competition in this series is so high. We had little issues with fatigue so we just couldn't quite fight for the top. The guys did a great job as usual. To finish in the top-10, finish on the lead lap with all the adversity we faced is encouraging but not the result we came for at all. I'm ready to get to the next round of the Endurance Cup because we saw with the No. 5 car today that Action Express is probably the best team in this paddock at endurance racing.”