They say lightning doesn’t strike twice, but for Acura in the IMSA WeatherTech SportsCar Championship, this year it did. Not only did it win the drivers’, teams’ and manufacturers’ titles in the DPi class with its Penske-run ARX-05, it also nailed the drivers’ and teams’ crowns in GTD with its Meyer Shank Racing NSX GT3 Evo.

The road to success is often paved with obstacles to overcome, and the story for Honda’s performance and luxury brand was no different. And while the champagne was being toasted at Road Atlanta on Saturday evening – led by Acura’s vice president, brand officer and resident Ayrton Senna fan Jon Ikeda – it was worth reflecting on all the trials and tribulations that went before.

“To be winning championships after just three years is incredible,” says Ikeda. “I can’t say enough about Mike Shank and his team, who have been with us since the start. Roger Penske and his team are the gold standard of the industry.

“We partnered with winners, and we’ve gotten great support from everyone at HPD with their tireless efforts. Acura is a performance brand. We’re here to win races and compete for championships. And we’re not done yet.” 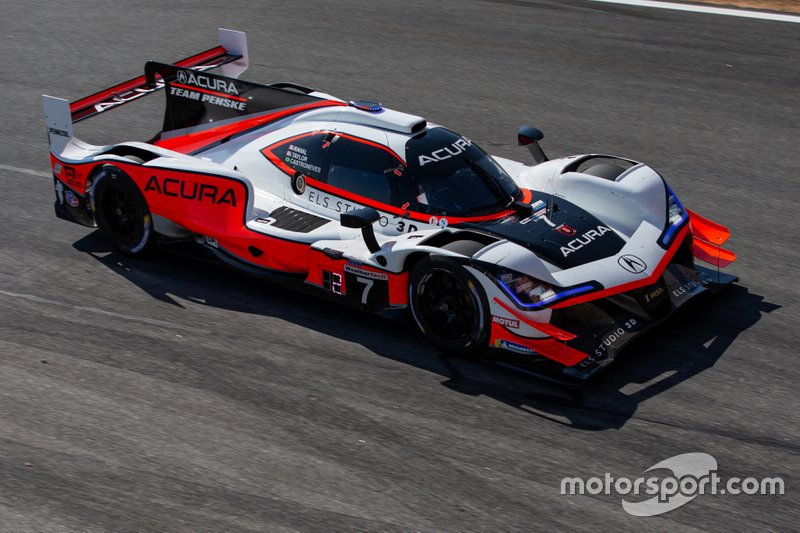 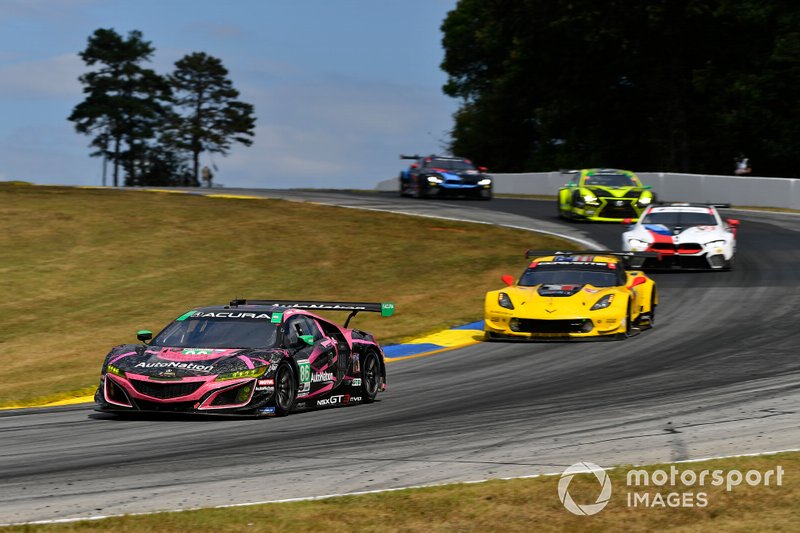 Also at the heart of celebrations was Art St. Cyr, who this year stepped down as Honda Performance Development president to switch to VP and business head of Auto Operations for American Honda. Just to prove he can’t get racing out of his system, the architect of its recent sportcar prowess was on hand to explain to Motorsport.com just what had gone before – and how Honda’s F1 return came close to totally derailing the GT3 project at one point!

“It’s been a very undefined journey,” smiles St. Cyr, reflecting on the years of effort. “It became a three-stage process: We started with the TLX [for what was then called the Pirelli World Challenge], which we called a GT3 but it really wasn’t, we had to get waivers. Our first GT3 to meet the global GT3 spec was the NSX, the second step, and step three was the DPi, because we wanted to go for overall race wins.

“The GT3 in particular had its challenges: for example, we had to put bosses on the engine to fit a starter. With the [road car] hybrid, you don’t have a starter! When we originally worked on it, we got approval [from Japan] to do that at HPD in 2015. But then we got tied up with IndyCar stuff, and Japan was gracious enough to finish it for us.” 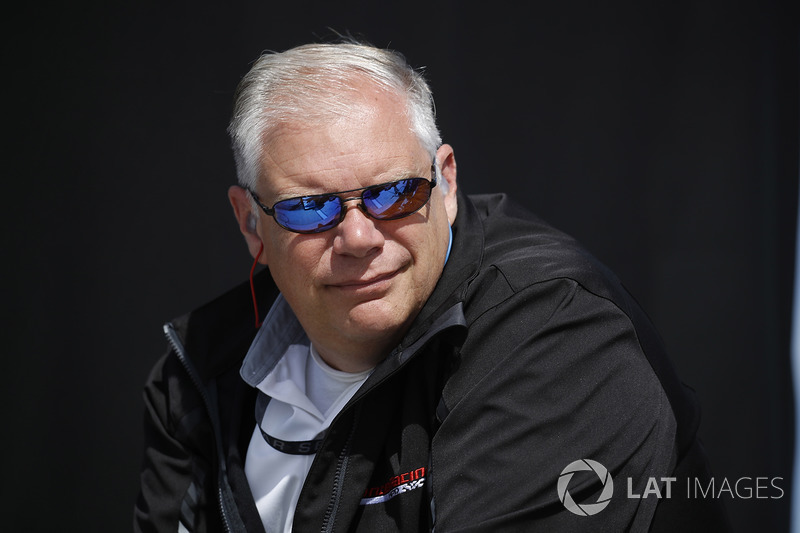 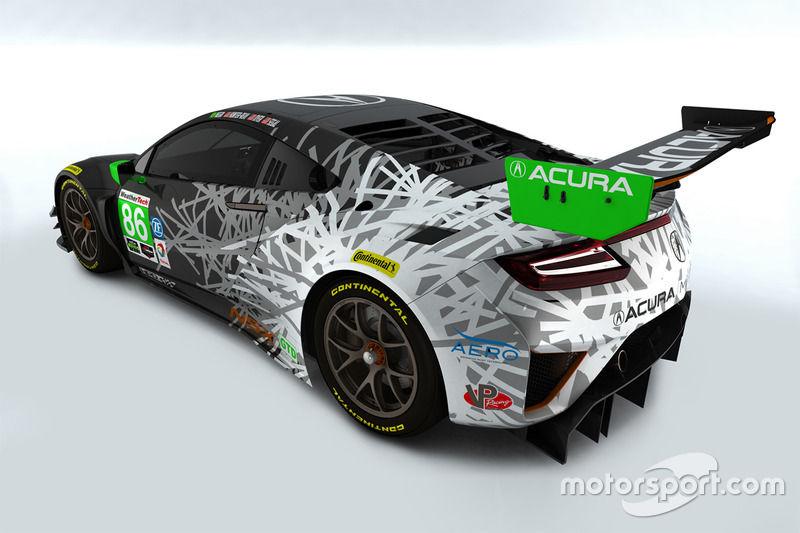 The #86 car, commemorating Acura’s 30th anniversary since its establishment in 1986, will have a black nose, fading to a grey cross hatch pattern before giving way to white at the rear

But just as Acura thought its GT3 workload was over, it was thrown a curveball as a direct result of participation in the very highest echelon of the sport…

“So Japan worked on it, then they got the F1 engine, which they had to focus on!” recalls St. Cyr. “So now it was like, ‘Oh man! Now what are we going to do?’ We took it back and finished it up. It actually created some conflict because our concept and theirs was a little bit different.

“We changed the rear suspension geometry, because we have much bumpier tracks than Japan had designed it for, more of the European-style glass-smooth GT3 tracks. Here, we have Sebring…”

Remember, this was despite a heavy workload as Honda attempted to redress its deficit against rival Chevrolet in IndyCar, when the Wirth Research-penned road/street course aerokit for 2015 proved less efficient and consistent than rival Chevy’s Pratt & Miller design.

“We ended up doing this in our spare time, basically, while focusing on the IndyCar side,” he adds. “But we squeezed it in. Even with a tight homologation timeline, we got it out. The first year [2017] was a pro-pro line-up, with Andy Lally and Katherine Legge, and they helped us shake it down quite a bit – remember, we’d never produced one of these before!

“Last year, we almost won the championship. But we realized our aerodynamic window was pretty narrow for that car, and thus came the idea of doing the Evo.” 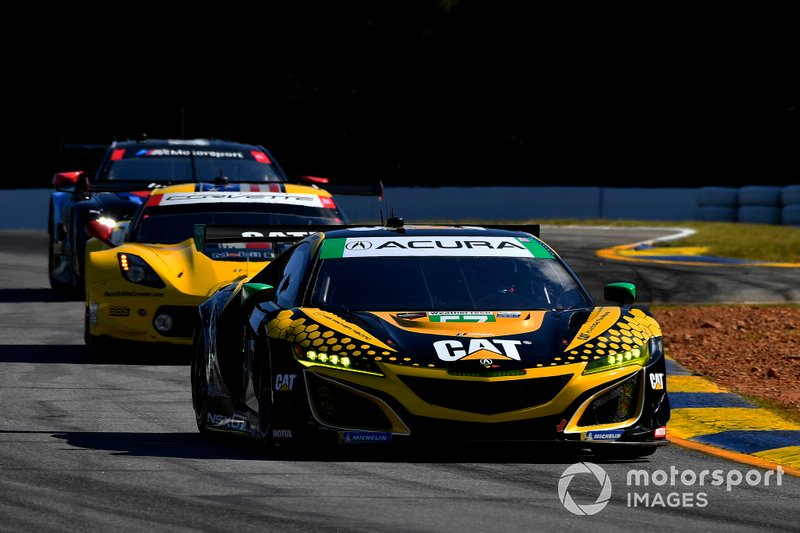 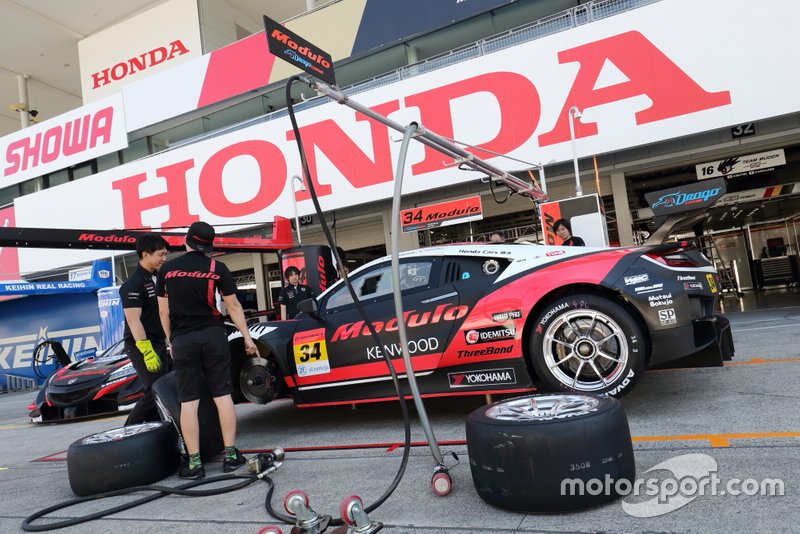 And that did the job, as the revised aero package that was homologated worked a treat: “This year, we had a better aerodynamic setup for a bigger variety of tracks, and working with Meyer Shank Racing, and RTR on the World Challenge side, was very helpful.”

He goes on to admit: “There were a couple of times we weren’t exactly sure this thing was going to happen! Just from a timing and workload standpoint. It was a very interesting journey that involved lots of different people and, quite frankly, some arguments between the HPD and HRD guys to get this across the line – for example, them wanting a stable global platform and us wanting more compliant suspension to suit our tracks.

“But there are challenges in life, and at the end of the day it’s a great car. We’re winning a lot of races right around the world, and we’re selling a lot of them too.” 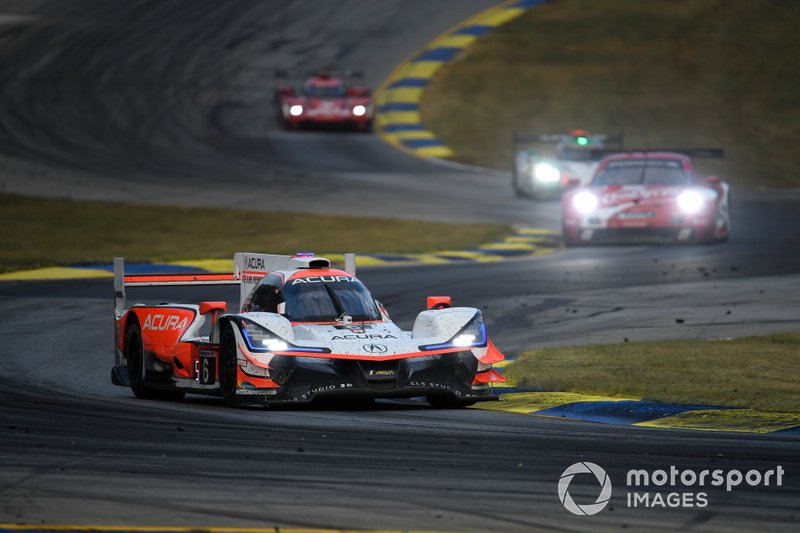 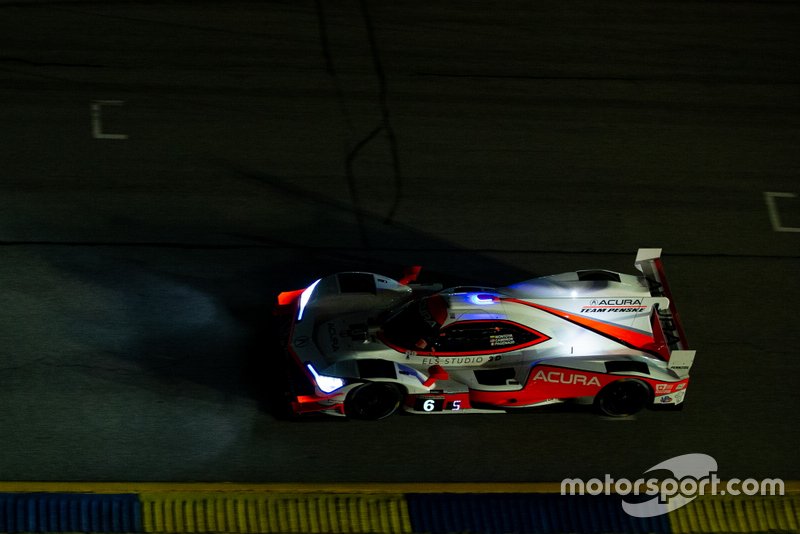 As well as chasing success in GT Daytona, Acura took the plunge with a full-on Daytona Prototype International assault with Team Penske. After a learning season in 2018, it swept the board in IMSA’s top class this year, winning the drivers’ title with Juan Pablo Montoya and Dane Cameron (with a little help from Indy 500 winner Simon Pagenaud at Daytona, Sebring and Petit Le Mans).

St. Cyr explains: “Acura is a performance brand so it has to race and it has to win. We want to win at the highest levels, and in sportscars that means DPi. We always had DPi in mind, with the NSX the stepping stone to this program with Penske.

“The formula is great; it allows you to keep costs relatively under control We’re able to use our production-based engines, it’s the same V6 engine as in your MDX or TLX. We might have slapped a couple of turbos on it, and raised the horsepower by 300 or so, but it’s still the same heart.”

Acura pulled off a coup when it struck a deal with Roger Penske’s multiple title-winning giant, and with a man whose sportscar legacy stretches all the way back to the 1960s.

“Roger is great,” says St. Cyr. “We’ve worked with him before in IndyCar, in the IRL days and sole-supplier days, and we know they’re a professional bunch.

“We had some teething pains last year, we didn’t meet our expectations – and part of that is relearning how to work together. But they’re such a professional organization, and they learned from their mistakes just as we did from ours. We learn together and better communicate, and obviously everything came together this year.” 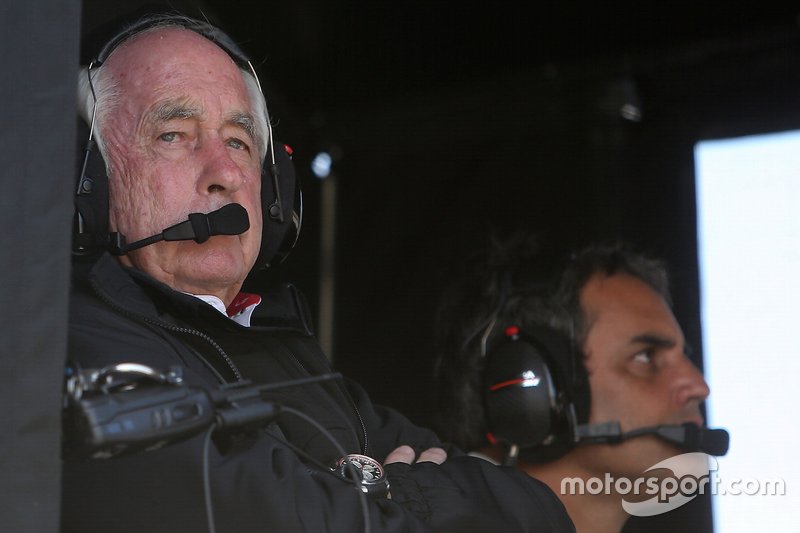 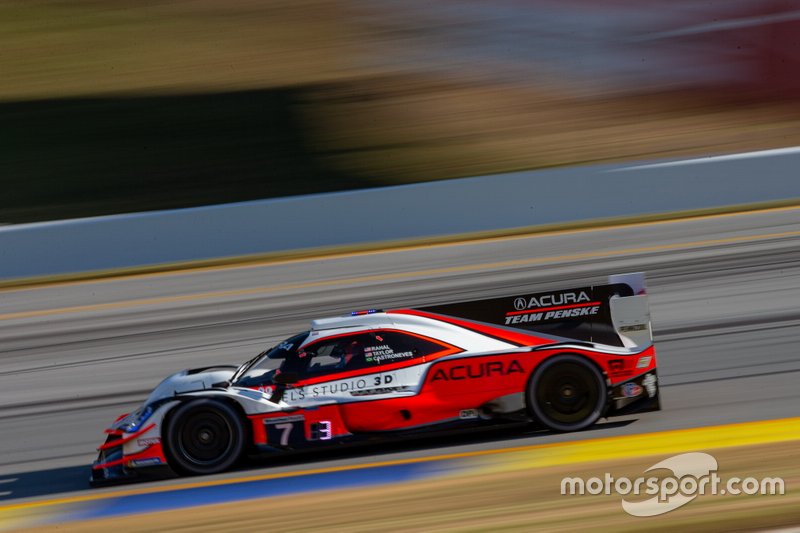 Getting the balance right

It’s a reality of modern sportscar racing that to conquer your rivals you have to master the Balance of Performance regulations. Of course, keeping everyone happy all of the time is never going to happen, so how do you get into a position to give yourself the best chance of success?

“We worked hard with IMSA to understand it,” replies St. Cyr. “Because what we didn’t want to do was [for them to] BoP the team. We worked with Roger, we consider we’ve got the best drivers – F1 race winners, IMSA champions, Indy champions – so we have a pretty spectacular team and driver lineup.

“The biggest discussion we had with IMSA was ‘please BoP the car and not the team’ – you want the best teams and drivers in the series. I think we came to an understanding of how to do that.

“With BoP there’s always going to be winners and losers, some unhappy and happy people. That’s the way it is. And it’s all perception, whether you have ‘bad BoP’ or ‘good BoP’ you’ve just got to do the best you can and try to win the championship.

“Different cars perform better at different tracks. And you have to learn to live with that, and do your utmost to not suffer bad results. You can have good results and fair results, it’s the bad results that really hurt you in the points.

“In IMSA, you gotta make hay when the sun is shining, right? That’s the reality of BoP. It’s a great formula, it’s a great way for Acura to show our performance. And then to come to Road Atlanta for Petit Le Mans, and win championships in DPi and GTD, it shows just what we set out to do.

“It’s been a pretty good year!” 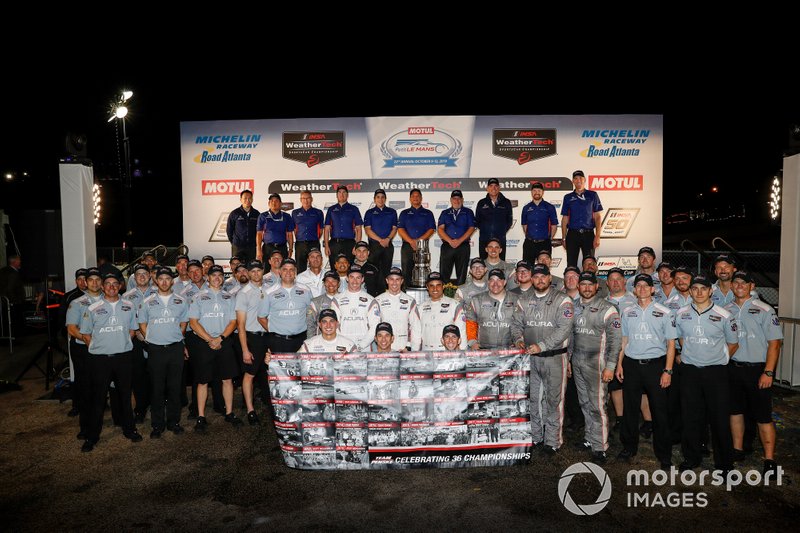 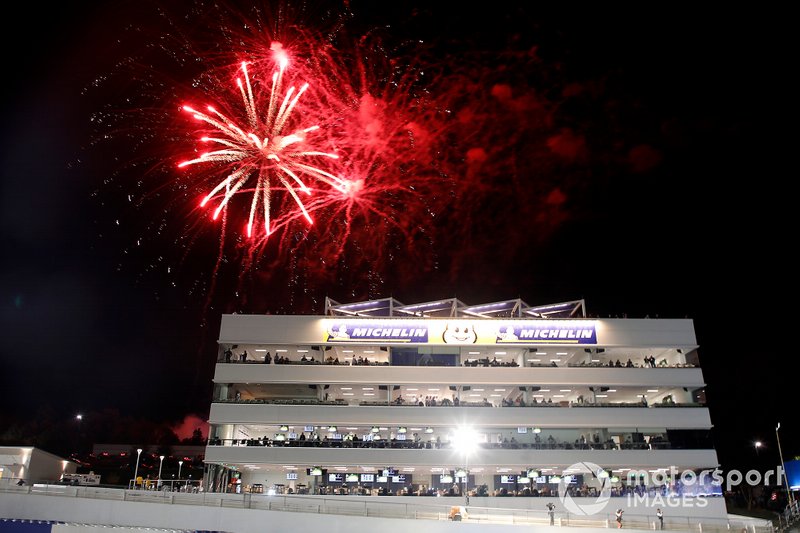 Fire works after the race