Sebring 12 Hours polesitter Dane Cameron has explained the litany of issues that caused the #6 Acura Team Penske entry's challenge in the 67th running of the Florida classic to fall apart.

Cameron led the field under yellow at the start of a rain-hit race, but once the safety car pulled in, the #6 Acura ARX-05 quickly dropped down the order before an early first pitstop.

The car shared by Cameron, Juan Pablo Montoya and Simon Pagenaud then lost further ground when it made another stop to replace a steering wheel – which was followed by a pass-through penalty for pitlane speeding.

Further trouble, which required a five-minute stop to change the rear bodywork, meant the #6 eventually finished nine laps down on the winning Action Express Racing Cadillac in ninth.

Cameron told Motorsport.com: "We were having a bunch of electrical problems. We took a stab at some tire pressures for the wet, which didn’t really work, then we changed tires and the car was ok again.

"Then our IMSA logger was failing and you can’t run without, so we had to stop several times to fix it and that was that. We kept having to come fix it – we fixed it once and then we had to fix it again.

"It was the same problem and it took us a while to get it 100 percent fixed.

"We also failed a steering wheel, we were losing screens, gearshifts and things during that same period in the wet. The problem we had in the wet was the short period before my car made its first service and then it was myriad electrical problems.

"There were never enough yellows to recoup much of [the deficit]."

He added: "It’s always disappointing. For sure you want to win. We were on pole, we had a quick car. That’s a small something to take away from it. We know we’re quick, we just need to execute."

The opening stages of the race were characterised by Cadillac domination, as both Action Express cars sprinted away from the field in the wet after the safety car pulled off.

After Acura also struggled in similar weather during the closing stages of the Rolex 24 at Daytona, Cameron admits the Penske team has work ahead to improve in such conditions.

"Not sure why we seem to miss a bit [in the wet]," he said. "We’ll spend time trying to get to the bottom of that one. The car was very good in the dry at the end.

"For sure we need to do a bit of homework to get a bit better in the wet, it seems."

The sister car, the #7 Acura ARX-05 piloted by Helio Castroneves, Ricky Taylor and Alexander Rossi, suffered similar handling difficulties in the wet and fell a lap behind in the early stages.

However, without the same electrical issues as the #6, this trio was able to recover and in the late stages get back on the lead lap to finish fourth. 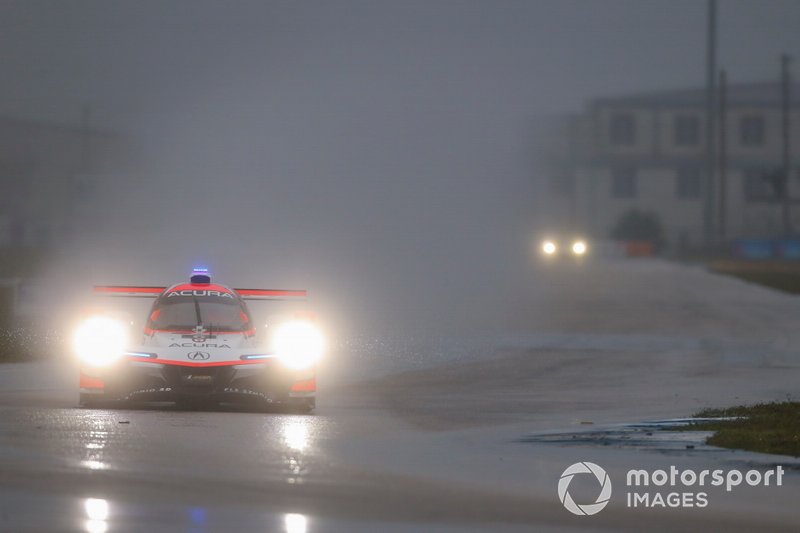