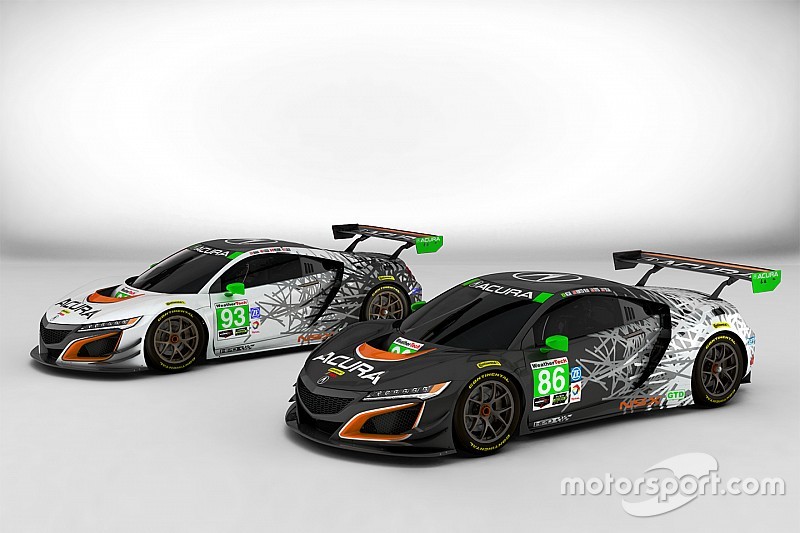 Michael Shank Racing, which will run Acura’s two-car effort in the IMSA WeatherTech SportsCar Championship, has also revealed the driver lineups for the Rolex 24 Hours of Daytona.

The #86 car, commemorating Acura’s 30th anniversary since its establishment in 1986, will have a black nose, fading to a grey cross hatch pattern before giving way to white at the rear.

It will be raced by Jeff Segal and Ozz Negri for the full season, with Tom Dyer as the endurance race “third man” and 2012 IndyCar champion and 2014 Indy 500 winner Ryan Hunter-Reay joining this trio for next month’s Rolex 24 Hours at Daytona.

The #93 team car, representing 1993, the year Honda Performance Development was founded, will reverse that color pattern, with a white front end transitioning to a black rear deck. Its full-timers are Andy Lally and Katherine Legge, who will be joined by Mark Wilkins for the Rolex 24, Sebring 12 Hours, Watkins Glen 6 Hours and Petit Le Mans. At Daytona in January, their fourth man will be IndyCar race winner Graham Rahal.

Art St. Cyr, president of HPD and Acura Motorsports, said : “The debut of the Acura NSX GT3 at the prestigious Rolex 24 will mark the return of the Acura brand to IMSA sports car competition.

“We’ve aimed to race the NSX in North America since the car was just a sketch on paper, and we couldn’t be more excited than to debut at Daytona.”

All eight drivers will take part in the January 6-8 “Roar Before the 24”, IMSA series open test prior to January 28-29 Rolex 24 at Daytona International Speedway, the opening round of the 12-race 2017 WeatherTech SportsCar Championship.