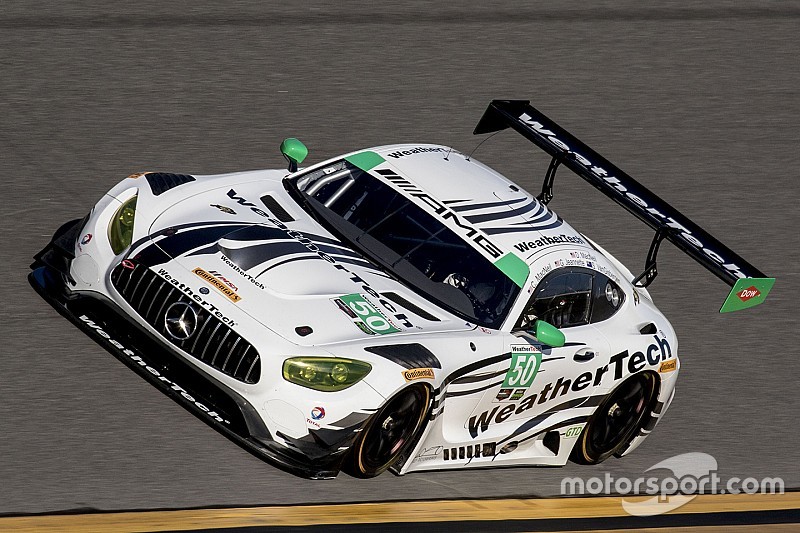 Daytona Beach. Three Mercedes-AMG Customer Sports racing teams totaled more than 2,000 miles in three days of testing this past weekend at Daytona International Speedway (DIS) in preparation for the Rolex 24 At Daytona. The Roar Before the Rolex 24 At Daytona (January 6 – 8) test was a mandatory session for all teams participating in the 55th running of the Rolex 24, a 24-hour long endurance race on the 3.56-mile Daytona road course.

Mercedes-AMG GT3 IMSA entries from AMG-Team Riley Motorsports, WeatherTech Racing and SunEnergy1 Racing ran a combined 564 trouble-free laps on the DIS road course over the three-day test, which at times was run in cold and rainy conditions.

The No. 33 AMG-Team Riley Motorsports Mercedes-AMG GT3 tested for the first time with all four of its Rolex 24 drivers at Daytona. Full-season teammates Ben Keating and Jeroen Bleekemolen were joined by recently announced Rolex 24 additions Adam Christodoulou and Mario Farnbacher.

The No. 50 WeatherTech Racing Mercedes-AMG GT3 team also tested with its full, four-driver Rolex 24 At Daytona lineup for the first time. Full-season teammates Cooper MacNeil and Gunnar Jeannette will co-drive with Shane van Gisbergen and Thomas Jaeger in the Daytona opener.

The No. 75 SunEnergy1 Racing Mercedes-AMG GT3 team tested with Kenny Habul, Tristan Vautier and Boris Said. A fourth Rolex 24 driver for the SunEnergy1 team will be announced at a later date.

All AMG Customer Sports teams in the US race the latest version of the Mercedes-AMG GT3 race car, equipped with a hand-built, naturally-aspirated 6.3-liter V8.

Thomas Jaeger – AMG Customer Sports Program Coordinator and Driver, No. 50 WeatherTech Racing Mercedes-AMG GT3: “We are very happy so far. It was a very good test because we didn’t have any technical issues. We could do a lot of mileage with all three cars, we had good race preparation and did some long runs as well. It is our first time here at Daytona, and even with some tests here before, you still always learn something new, especially this weekend with some big temperature changes. It was very warm, then raining, then very cool. The car is pretty good to drive in wet and damp conditions. We have seen this at the Nurburgring, at Spa and at other tracks, and this is also an advantage here. It is difficult to judge at the moment the performance of the other manufacturers, but we showed good performance in all of the sessions, so we are happy and looking forward to the race.”

Bill Riley – AMG-Team Riley Motorsports Team Owner and Director: “I feel good with where we are. It’s the Rolex 24 At Daytona, anything can happen, so you have to be careful, but the way we cycled all the drivers through the cars and got everybody comfortable, that’s a big deal. So, really it was about as perfect of a test as you can get. The engineers did their job, the crew did their job to keep everything rolling, and the help and support from Mercedes-AMG is the icing on the cake. It all feels very familiar, and that is a credit to the professionalism of Mercedes-AMG, how they handle their customers and deal with the customer needs. We have had a few tests with them and it just keeps getting smoother and smoother.”

Ben Keating – Driver, No. 33 AMG-Team Riley Motorsports Mercedes-AMG GT3: “The relationship with Mercedes-AMG is really great. I think it is a testament to how we all approach the business of racing. From the manufacturer, to the team, to the engineering and the drivers, we all have the same goal, and we all have a very high level of respect for each other. We have done ‘sweeps’ of changes on about every part I can think of. This takes a lot of time, but it also gives everyone involved an understanding of how the car works in different situations. The testing with Mercedes-AMG has been really strong.”

Neel Jani trying to add another sportscar jewel to his crown