Fresh from his first IMSA SportsCar Championship victory last week, ex-Formula 1 racer Kevin Magnussen makes his IndyCar Series debut at Road America this weekend. It's the latest in a growing list of comparisons with his father Jan's career in the US, after his own F1 exit mid-way through 1998. Shortly after announcing his deal with Panoz for 1999, Magnussen Sr spoke to Autosport about his Indycar ambitions for the 21 January issue.

Grand Prix refugee Jan Magnussen would have sniggered if you'd suggested to him a couple of months back that he'd end up driving a Panoz in North America this season. The sniggers would have turned to laughter if you'd added that his mount would be a front-engined open-top car.

However, as soon as the Dane had tried out the marque's old front-engined GT racer in early December he became deadly serious about the idea.

"He didn't want to leave without signing an agreement," recalls Panoz motorsport boss Tony Dowe. "We did the deal there and then.

"I was surprised I got him. I wouldn't have thought he was interested in Panoz, or racing in sportscars in North America."

Magnussen was more than just interested in driving the US marque's unconventional new Spyder. He regards his deal for the new American Le Mans Series and the Le Mans 24 Hours as the first step towards rebuilding his career after a mid-season dismissal by Stewart Grand Prix last year. The 25-year-old makes no secret of the fact that he wants to race in the CART Championship Series in 2000.

"I don't see this as a step down, I see it as a step towards establishing myself in America," he explains. "I really wanted to do Champ Cars this year. I'd been speaking to a lot of teams, but nothing came up. The Panoz drive is a good way of getting my name known in America, and it will help me towards getting a CART drive." 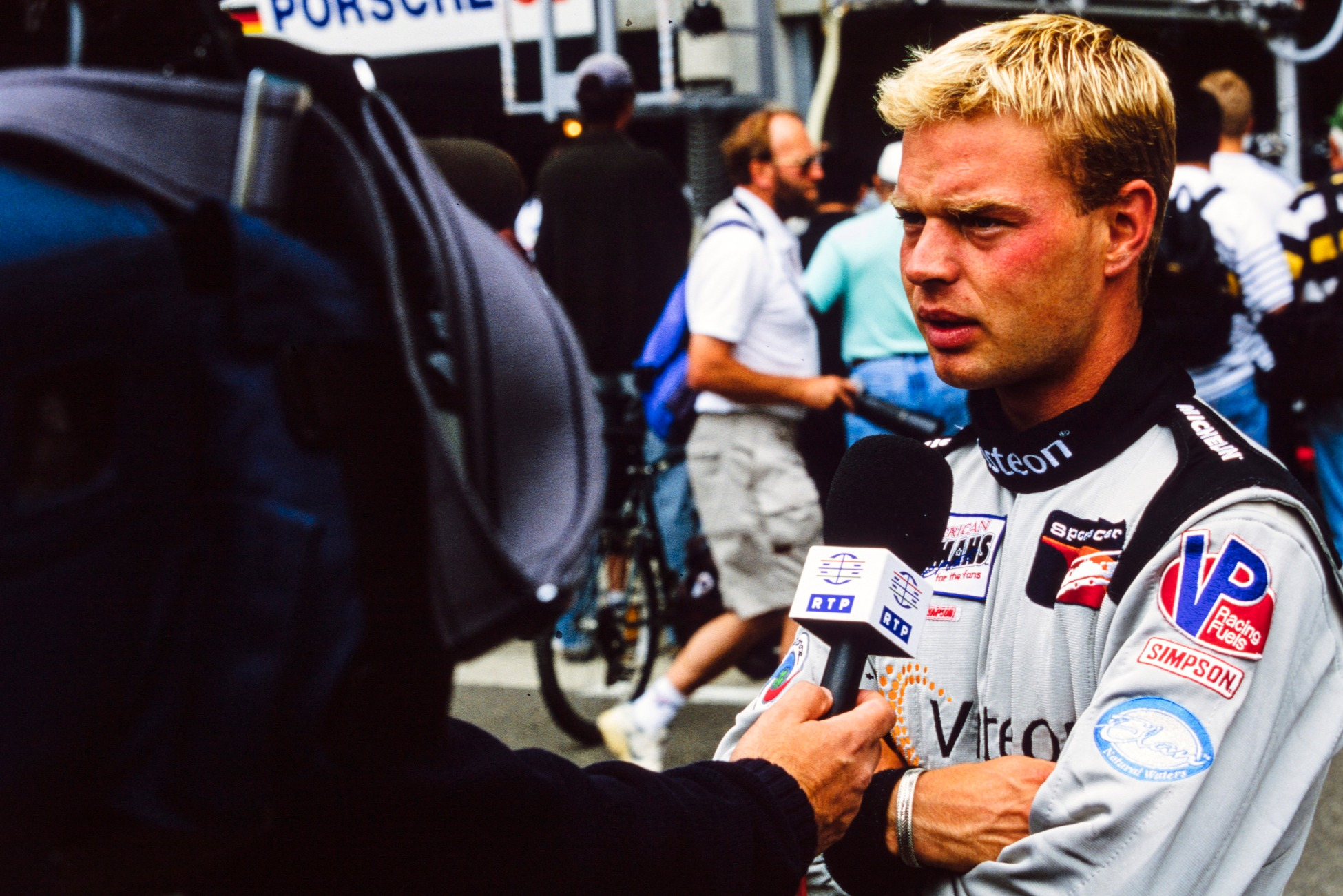 Jan Magnussen gives an interview in 1999

He plays down the prospect, but it is likely that he'll be testing a Champ Car before the coming season is out. Panoz is backed by Ford, like Stewart, and Dowe admits top brass from the Blue Oval have already contacted him about "borrowing Jan to help out one of their teams in Champ Cars". Expect the Dane to be given a run-out in one of the Newman-Haas team's Swift chassis.

His comeback has gathered momentum, but getting the ball rolling initially proved harder than might have been imagined for a driver once called the next Ayrton Senna.

"If you want to know the truth," says his manager David Sears, "the stigma of being sacked by Stewart made it difficult to convince people in Champ Cars that Jan was worth taking on. The touring car people, meanwhile, thought his head was still in single-seaters. We were scouring the world for other options."

"Everyone at Panoz gave me their full support when I did the test for them. That's something I'd missed for a long time - the feeling that the whole team is behind you" Jan Magnussen

One obvious alternative would have been a return to Mercedes. He enjoyed a couple of moderately successful seasons with the Stuttgart marque in Class 1 touring cars before he moved to Stewart. There was some contact between the Three-Pointed Star and its former charge.

"I was due to go and talk to them," he says, "but I had to go and test the Panoz, so I never really spoke to them seriously. There have been lots of rumours about me in the past couple of months or so, but most of them weren't true."

Speculation about the Panoz deal was kept to a minimum in the wake of his test with the team. The former F1 star put pen to paper with the sportscar outfit in December, but this was kept secret until the US marque announced its 1999 programme at the Detroit motor show in early January.

Keeping the lid on it must have been difficult, because Magnussen's quiet personality can rarely have been nearer to bubbling. 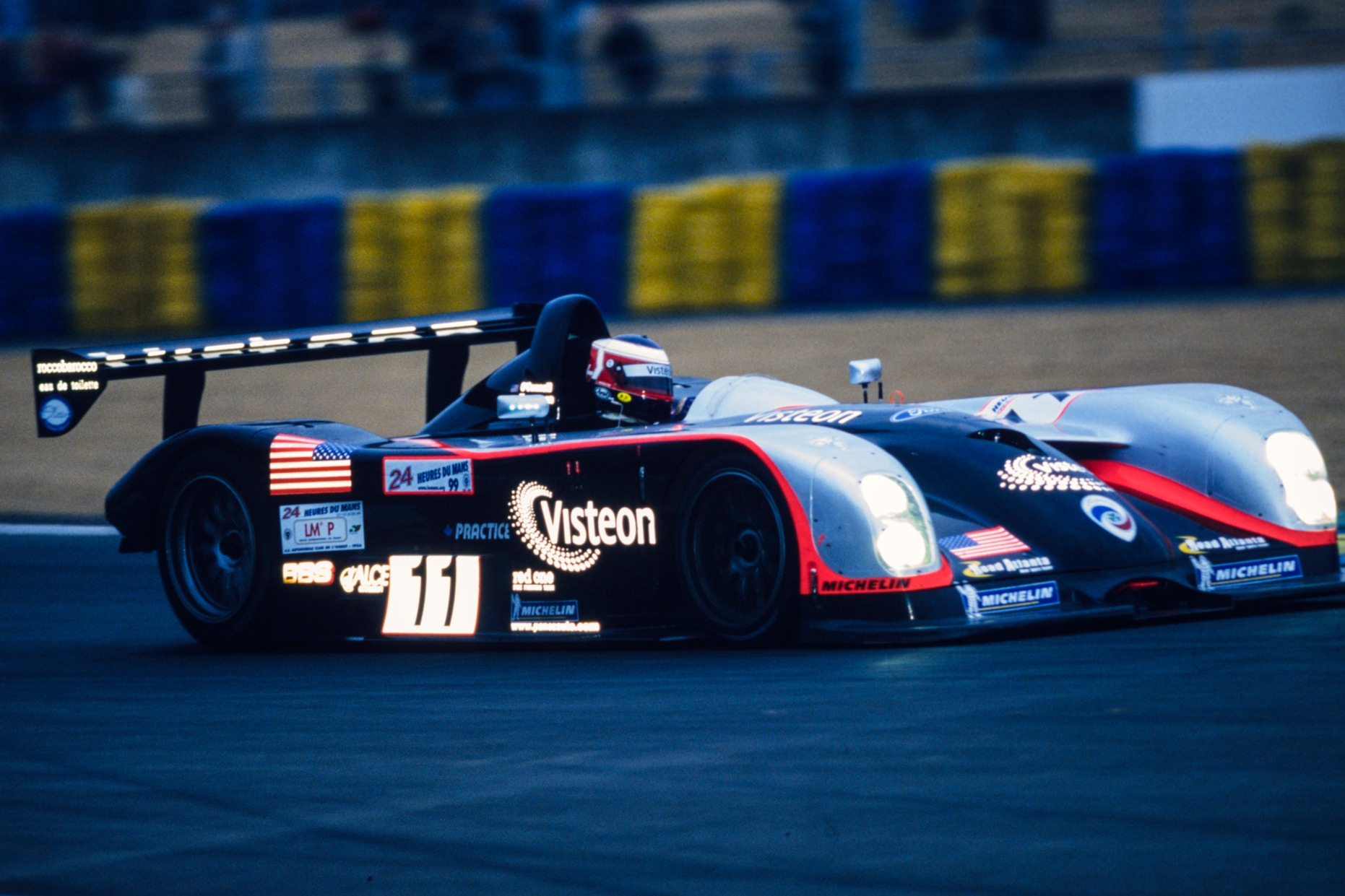 "The Panoz is really fun to drive, and Road Atlanta is an awesome circuit," he says.

However, the reasons for his renewed enthusiasm go deeper than a car that is enjoyable to drive. He is enjoying the full backing of his team.

"Everyone at Panoz gave me their full support when I did the test for them," he says. "That's something I'd missed for a long time - the feeling that the whole team is behind you."

Dowe says: "We treated Jan the way he should be treated - with respect. He seemed to enjoy the way we worked, and it came back in the lap times."

It came back in no uncertain manner. The driver beat the best ever Panoz time around its home track of Road Atlanta. This bodes well for the Dane's ALMS campaign, in which he will probably be paired with Frenchman Eric Bernard. It kicks off with the Sebring 12 Hours on 20 March.

The attack on the ALMS is the former GP driver's number one priority this season, despite his CART ambitions.

"I can wait for Champ Car, but it will come eventually. I'm pretty set on doing well in sportscars," he says. "I know it won't be easy, but this year will give me some good experience. 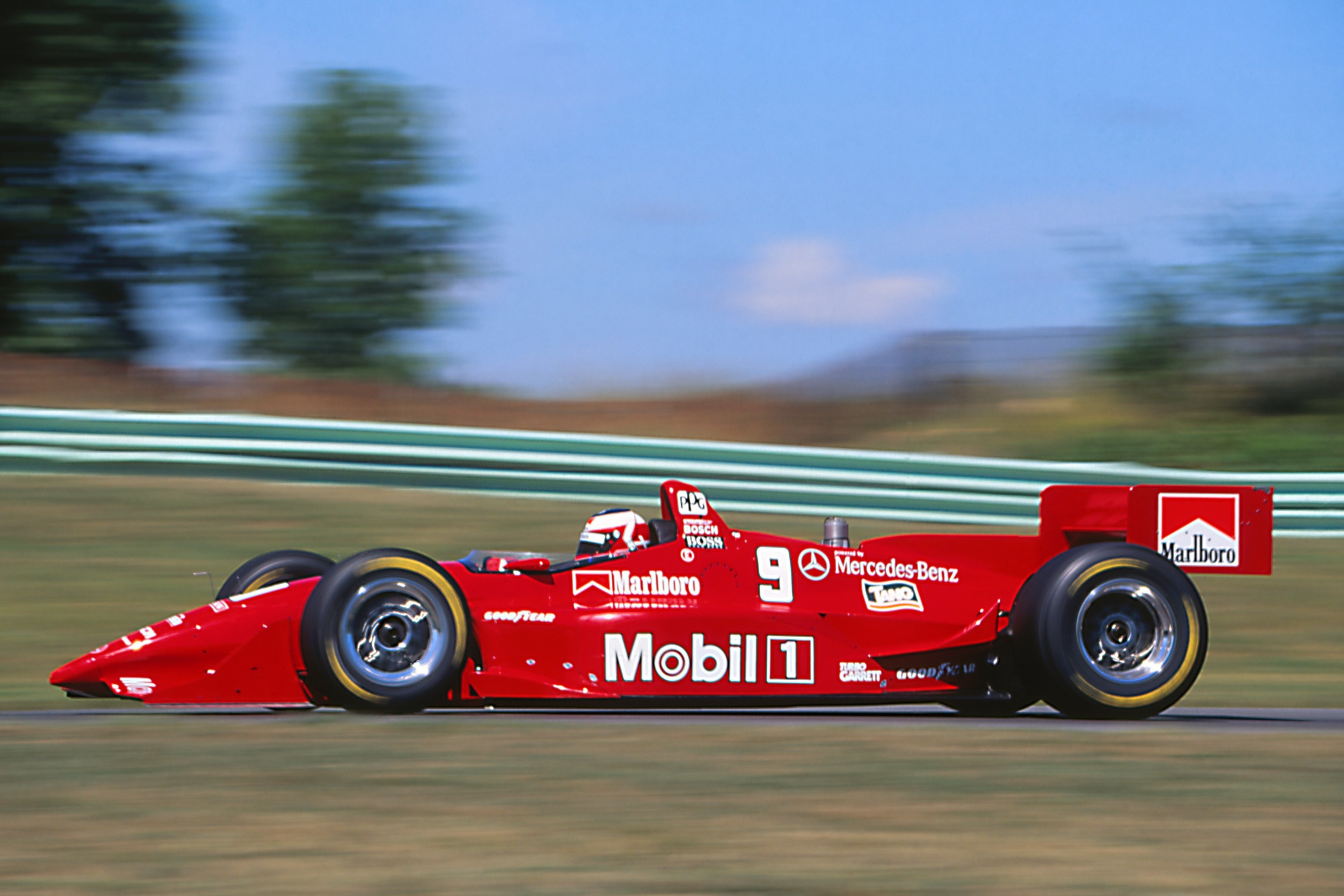 A swift graduation to CART is what Magnussen wants, but he may be slowed by those who remember his four-race sojourn in uncompetitive Penskes in 1996. Some claim he was out of his depth, that he was unable to drive to his limit. Others say he did well in difficult circumstances.

"Jan struggled because the cars are very heavy to drive," says Nigel Beresford, who engineered the Dane in his one-off appearance with the Penske factory team at Mid-Ohio.

"It's probably fair to say we didn't get the best out of him, because we didn't give him a good car. There were also reliability issues. We didn't do a good job."

"The [Penske] deal was for a part programme with lots of testing in his first season and a full-year after that. We should have taken it, but Jan had always wanted to do F1, so we felt he should go to Stewart" David Sears

The driver contested the final three races for the privateer Hogan Penske team, which appeared more encouraged by him. That's not surprising, given that he outqualified factory Penske star Al Unser JR at Elkhart Lake and outraced him at Laguna Seca.

"We were very encouraged by his ability to jump in the car and get a feel for it," says former Hogan team manager Tom Wurtz. "He adjusted well to everything.

"I don't agree he couldn't handle it physically. He was very gung ho, ready to take on the world. In a short period of time, he showed a lot of potential." 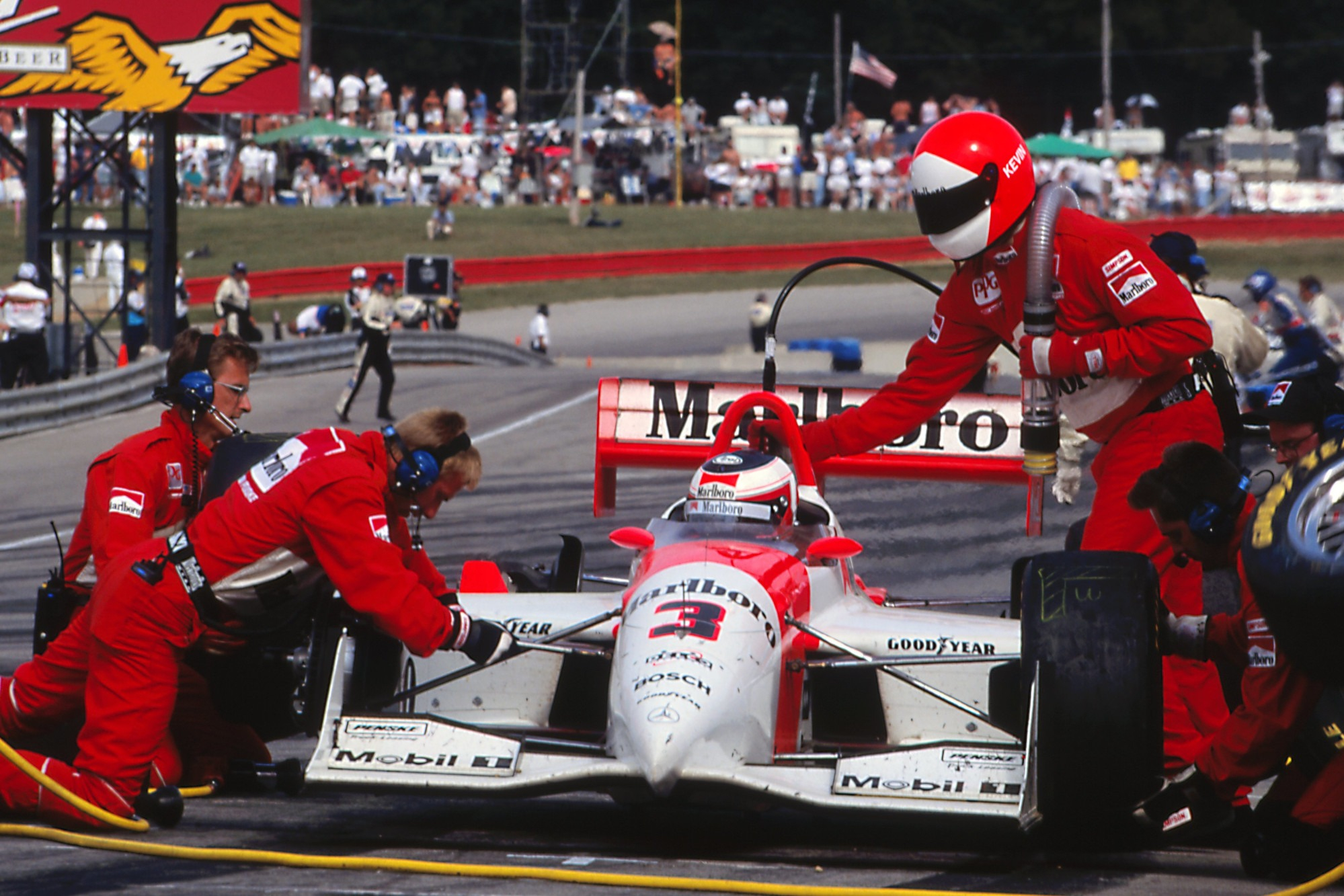 Magnussen had option to stay with Penske for 1997, but turned it down in favour of F1 with Stewart

Magnussen wishes he'd stayed Stateside after the handful of CART races he contested at the end of 1996.

There was an offer from the Penske team, according to Sears.

"The deal was for a part programme with lots of testing in his first season and a full-year after that," he explains. "We should have taken it, but Jan had always wanted to do F1, so we felt he should go to Stewart."

The Dane had his own answer to accusations of lack of physical strength.

"I went to the US straight from the hospital," he explains. He had just missed two Class 1 touring car meetings after breaking a leg on a paddock bike. 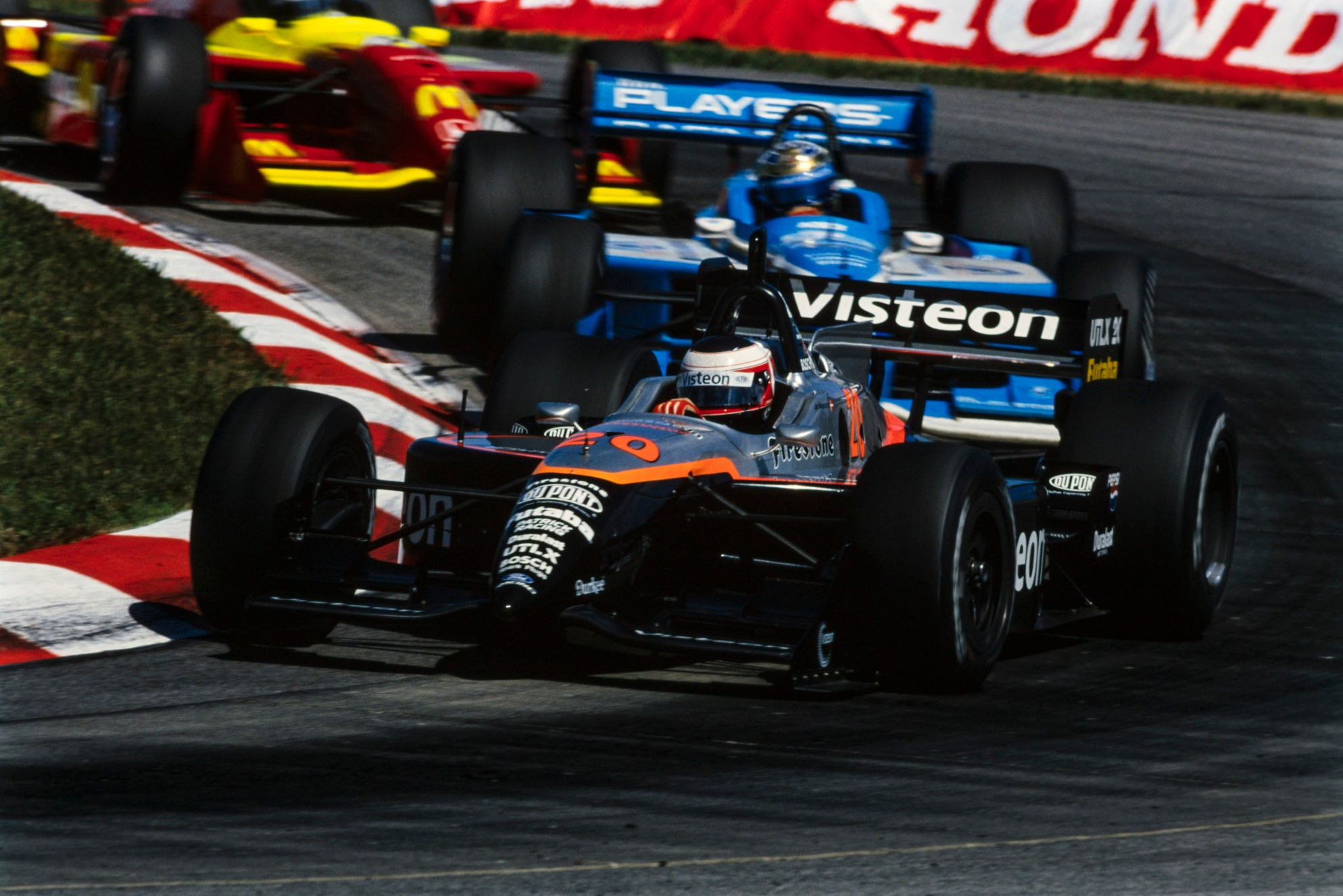 Magnussen did get to return to the CART Indycar series in 1999, but only managed one top-10 finish in his seven late-season outings with Patrick Racing - a team in flux that had lost team leader Adrian Fernandez to injury and flip-flopped between Reynard and Swift chassis. It proved the end of his single-seater aspirations, but he still had a bright future in sportscars.

Together with Johnny O'Connell, he had given Panoz its first win in only its third start at Mosport in 1999, as the fledgling marque pipped the might of BMW to the team's title. That would prove the high point of the four years Magnussen spent with the team, as Audi's arrival to the ALMS in 2000 with the R8 moved the game on - although he did win a further five races, including the ALMS's away-day at the Nurburgring in 2000, as part of a well-matched partnership with David Brabham.

After a first foray into GT racing with Prodrive's 550 Maranello in the 2003 ALMS, and a chance to see what the all-conquering R8 was about for himself at Le Mans that yielded fourth place with Team Goh, he joined Corvette Racing in 2004 and became a stalwart of the programme.

His four class wins in the GTS and GT1 divisions at Le Mans were backed up by three GT1 victories at the Sebring 12 Hours and GTLM honours in the 2015 Daytona 24 Hours.

The now-47-year-old Magnussen is a regular in LMP2 racing, and will share with his son Kevin for the first time when they pair up in a High Class Racing ORECA 07-Gibson at Le Mans in August. 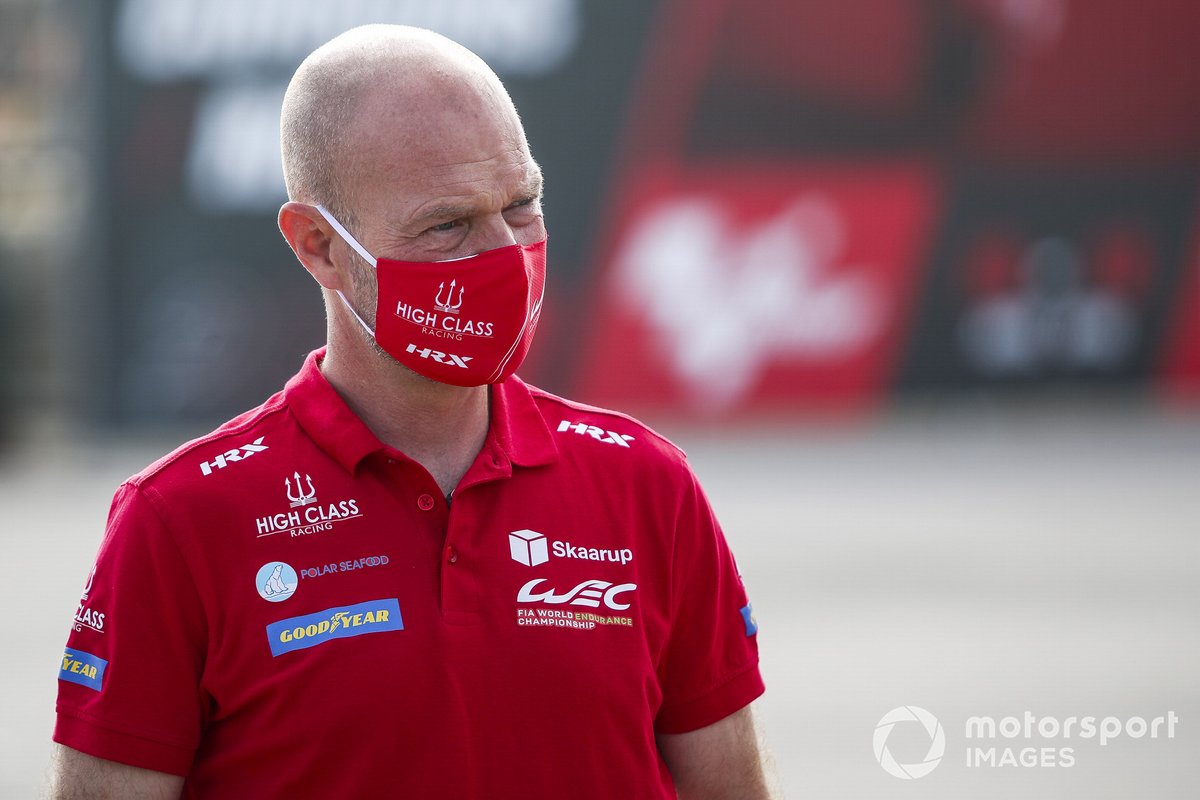