Australian motor racing driver John Martin joins Starworks Motorsport for the Sahlen’s Six Hours of The Glen – the seventh round of the 2014 TUDOR United SportsCar Championship, and round three of the North American Endurance Championship.

In his first foray in to Prototype Challenge racing, John will be joining Starworks driver Martin Fuentes in the #7 Bomberg liveried Oreca Chevrolet FLM09. In 2012 and 2013 Starworks Motorsport came home on the podium in third place at the end of the Sahlen’s Six Hours, so a win is firmly in the squad’s sights at the New York track this year after a stellar victory at Laguna Seca and the team currently sitting in P2 on the Championship table. 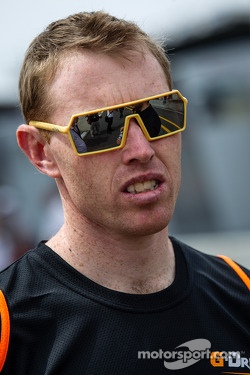 "I'm really excited to be given the opportunity to drive with Starworks for the ‘Six Hours of The Glen’”, says John, “and also to be a part of the United SportsCar Championship again. I have always wanted to race at Watkins Glen; it's an iconic track that looks high speed with an old school feel to it and I really enjoy circuits like that."

John commenced his open-wheel series racing in Europe in 2006 and competed in a variety of national and international Championships, including British Formula Ford, Formula 3, A1 Grand Prix, Superleague and World Series by Renault: Formula Renault 3.5.

The 30-year-old from Yeppoon, Queensland, made the move to sportscar racing in 2012 with Alan Docking Racing (ADR-Delta), having raced with the British outfit over the years, to compete in the FIA World Endurance Championship in LMP2.

John went on to win four of the last five FIA WEC rounds in 2013 with the ‘G-Drive Racing’ branded Delta-ADR and finished 3rd in class. He made his ‘Rolex 24 at Daytona’ debut this year in the joint Action Express/Delta-ADR No. 9 Corvette DP for the TUDOR United SportsCar Championship season-opener.

Peter Baron, team owner, Starworks Motorsport, concludes: “We’re really excited to have John join us for The Glen. We raced against him in 2012 in the WEC and he was by far our fiercest competitor, so it’s exciting to have him racing with us now. Unfortunately his current WEC season hasn’t kicked off yet, but we are very happy to capitalize on the opportunity of having him in our car!”

Delta-ADR will contest the LMP2 category of the WEC