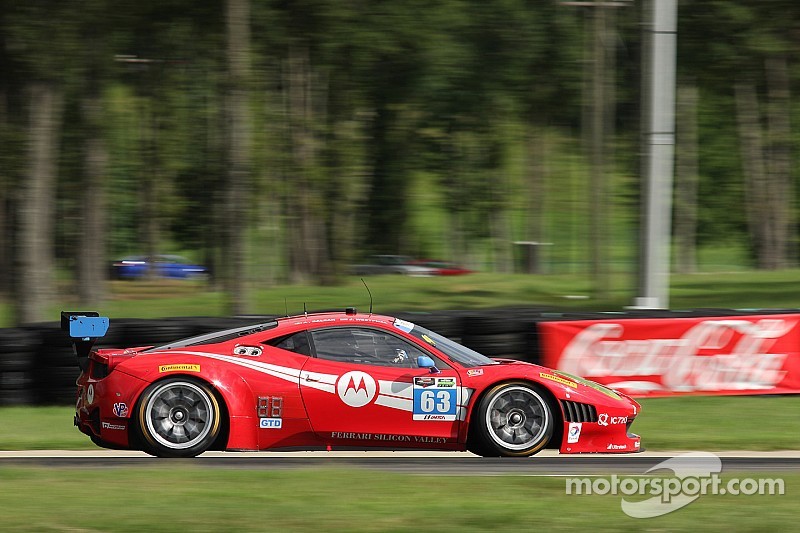 Balzan and Westphal score third podium of the season in TUDOR Championship race.

At the end of two hours and 45 minutes of hard fought racing in the Oak Tree Grand Prix, Alessandro Balzan and Jeff Westphal celebrated with their Scuderia Corsa crew as the no. 63 Scuderia Corsa Ferrari 458 Italia finished in second position in the GT-Daytona class.

The no. 63 Scuderia Corsa Ferrari 458 Italia qualified in ninth position, and Westphal advanced up to third position during the opening stint. At the first pit stop, Westphal turned the car over to Balzan who remained at the front of the field thanks to fast pit work by the Scuderia Corsa crew. Balzan battled past a number of Porsches to work back to second position, where he would finish.

"Today, we achieved more than the maximum performance possible," said Balzan. "Jeff did a terrific job in his stint and the Scuderia Corsa crew did an amazing job in the pit stops. Second position is amazing. I was driving past the maximum on every lap but it was clear that every time we closed the gap to the leader they could simply open it back up. It is hard to compete this way but we did everything that we could and it is a great result."

"We had a podium car today, and without the last full course caution period, we could have passed for a strong third place," said Hedlund. "My Ferrari of Silicon Valley/Tequila Patron Ferrari 458 Italia GT3 performed flawlessly. I would like to thank all our fans at the track today who came by and wished us well, as well as Giacomo Mattioli and his Scuderia Corsa team for preparing an excellent car for this entire weekend."

For his part, Mattioli would enjoy seeing his team compete for a podium result - despite the handicap Ferrari has with the current Balance of Performance that penalizes the 458 in GTD.

"It was a great weekend all around for Scuderia Corsa," said Mattioli. "Mike was very impressive at the Pirelli World Challenge in Sonoma and we are looking forward to more weekends in the series. In the TUDOR Championship, this result feels like a victory to me. We consolidated the lead of Ferrari in the manufacturer championship and we reduced the gap in the team championship. There are two races to go and Scuderia Corsa doesn't lift."

The next TUDOR Championship race will be September 19-20 at the Circuit of the Americas in Austin, Texas.