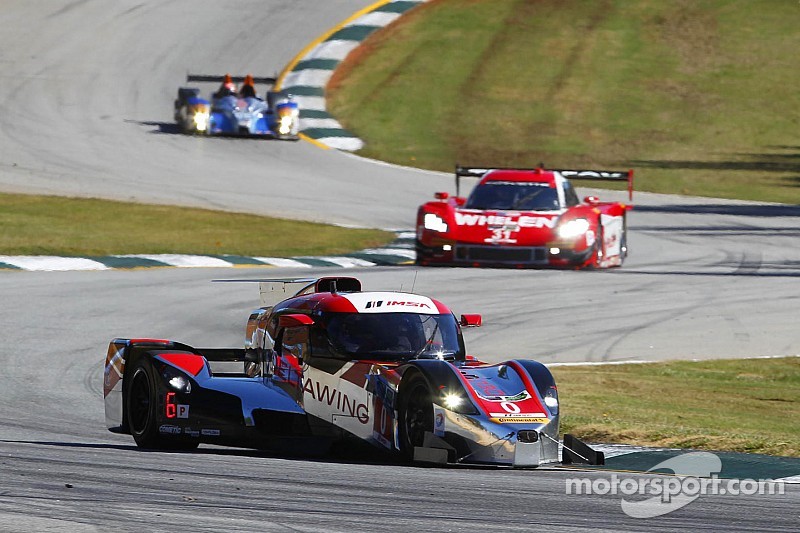 Andy Meyrick, Gabby Chaves and Katherine Legge recorded the best finish of the year with the DeltaWing.

Andy, along with his team-mates Gabby Chaves and Katherine Legge recorded the best finish of the year with the DeltaWing.

During the practice sessions on Thursday the team worked hard on a new aero package to ensure the car performed to the maximum for the final race of the year.

Despite only having three gears at the end we had competitive pace and even with the issues we still managed to bring the car home in a well-deserved fourth place.

Having qualified the coupe in fifth place on Friday, Legge also drove the race start on Saturday. Fighting for position and leading the race for part of her stint the Brit handed over to Chaves in fourth place. He again manoeuvred the coupe up to lead position before handing over to Cheshire-born Andy.

Even with two unscheduled pit stops and a replacement nose, Andy went on to have a consistent drive during his first stint. The strategy dictated the 28-year old would finish the race with total time in the cockpit of almost three hours 30 minutes. Taking over once again from American racer Chaves for the last hour, Andy maintained position and expertly nursed the car home without first and second gear, bringing the coupe over the finish line in a hard-fought fourth place.

“I’m extremely proud of the team and the result today,” commented Andy. “It was a great race with steady pace even though it was a busy circuit with 53 other cars on track. It is a testament to the hard work and development from the team.

“The car ran consistently and even though we were aiming for a podium, we have to take into consideration that we did have our fair share of challenges. Despite only having three gears at the end we had competitive pace and even with the issues we still managed to bring the car home in a well-deserved fourth place.

“A superb team effort by all and thanks to everybody at DeltaWing and to my team-mates for such a fantastic end to the season.”

$300,000 presented to champions of Patrón Endurance Cup at Road Atlanta