BMW and IMSA partner up

IMSA partners with BMW as the official automotive partner.

BMW has been named an official automotive partner of the International Motor Sports Association (IMSA) and will have a strong presence in this weekend’s TUDOR United SportsCar Championship season-opening Rolex 24 At Daytona, in addition to being the title sponsor of Friday’s BMW Performance 200, the opening race of the 2014 IMSA Continental Tire SportsCar Challenge.

In addition to competing in the Rolex 24 and the BMW Performance 200, BMW of North America, LLC, will field cars that will highlight the brand’s competition history at Daytona International Speedway. BMW also will display three new street cars that continue to build on the company’s motorsport foundation: the all-new, M235i, the fifth-generation 2015 BMW M3 Sedan and the BMW M4 Coupe. In addition, fans will have a chance to view one of BMW’s 2013 M Series cars that competed in the popular German-based touring car series, DTM.

“With a storied history at Daytona and in sports car racing for more than four decades, BMW is a natural fit for this weekend’s BMW Performance 200 and as an official partner of IMSA,” said David Pettit, IMSA vice president of marketing. “The Rolex 24 weekend is always a showcase for premium brands, starting with the cars, whether you’re talking about race cars or street cars. And BMW, of course, personifies premium.”

The Rolex 24 At Daytona will include a pair of factory-backed BMW Z4 GTEs from BMW Team RLL in the GT Le Mans (GTLM) class. The team’s No. 55 entry will be shared by Bill Auberlen, Andy Priaulx, Joey Hand and Maxime Martin; with Dirk Mueller, John Edwards, Graham Rahal and Dirk Werner slated to share the No. 56 machine. In the GT Daytona (GTD) class, BMW stalwarts Turner Motorsport will field the No. 94 BMW Z4 to be driven by Dane Cameron, Paul Dalla Lana, Augusto Farfus and Markus Palttala. 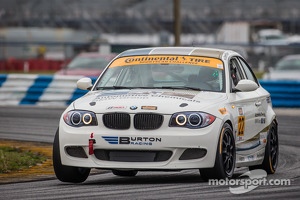 Instructors from the BMW Performance Driving School, in Spartanburg, S.C., will bring a number of BMW M6 Gran Coupes to give rides around the 3.56-mile Speedway road circuit.

“BMW couldn’t be more excited about starting the 2014 racing season at Daytona and the debut of the new TUDOR United SportsCar Championship,” said Gordon McDonnell, BMWNA motorsport manager. “Although this is our first 24-hour race with the Z4 GTLM, BMW Team RLL is no stranger to endurance racing and we have one of the best driver lineups I can recall.

“BMW always goes big at Daytona and fans will have plenty to see on and off the track this weekend. The BMW Performance 200 will be just be one of the highlights as we expect our privateer BMW teams to be right up front fighting for a win.”

FOX will broadcast the opening of the Rolex 24 live, with coverage beginning at 2 p.m. ET. A total of 15 hours of the race will be broadcast live on FOX Sports, with the remainder of the event streamed on IMSA.com. For complete broadcast information, visit www.imsa.com.

It's go time for the Daytona 24

Ferrucci returns to Detroit, where he made his IndyCar debut