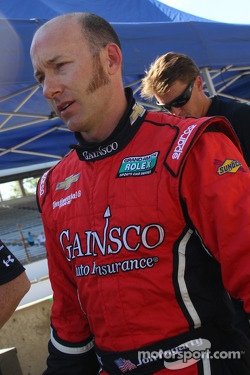 This year’s edition of the annual three-day New Year’s test on Daytona’s signature 3.56-mile road course is in preparation for the 52nd Rolex 24 At Daytona, January 23 – 26. Rain that plagued the Daytona area the last few days cleared by Friday but unseasonably cold temperatures that rarely crested above 50 degrees hit central Florida today.

After turning more than 50 laps in Friday’s first two sessions, GAINSCO posted the fifth-fastest lap time and third-quickest team time of the day. GAINSCO’s afternoon lap of 1:39.286 (129.082 mph) trailed only the similar No. 5 and No. 90 Corvette Daytona Prototypes that each turned a pair of slightly quicker laps.

“Everything started off OK,” Gurney said. “The conditions are so cold today that we aren’t really learning very much about fine-tuning the car. It’s just good to be out there running and getting everybody comfortable, and getting the guys that don’t run as much like Memo and Darren some laps. We’re in good shape so far.”

Now beginning its 10th season of competition, GAINSCO/Bob Stallings Racing first entered top-tier sports car racing in 2005 in the GRAND-AM Rolex Sports Car Series, contesting its first Rolex 24 the following year. The BobStallingsCars.com No. 99 GAINSCO team has tried several different three and four driver lineups in the Rolex over the years and is returning with the same exact combination for just the second time. The team of Gurney, Fogarty, Jimmie Johnson and Jimmy Vasser wheeled to 2008’s runner-up showing and returned to Daytona the following year.

“So far everything is going good,” Law said. “We were here two weeks ago, so we’ve got a good baseline. We’re running through the process of the car’s set-up and making sure we didn’t miss anything. We’re trying a few new items but overall we are just working on the system and how everything works.”

The Rolex Roar continues tomorrow and Sunday with the only night practice of the three-day test scheduled for Saturday evening.

Prototypes impress in first day of testing for Daytona 24