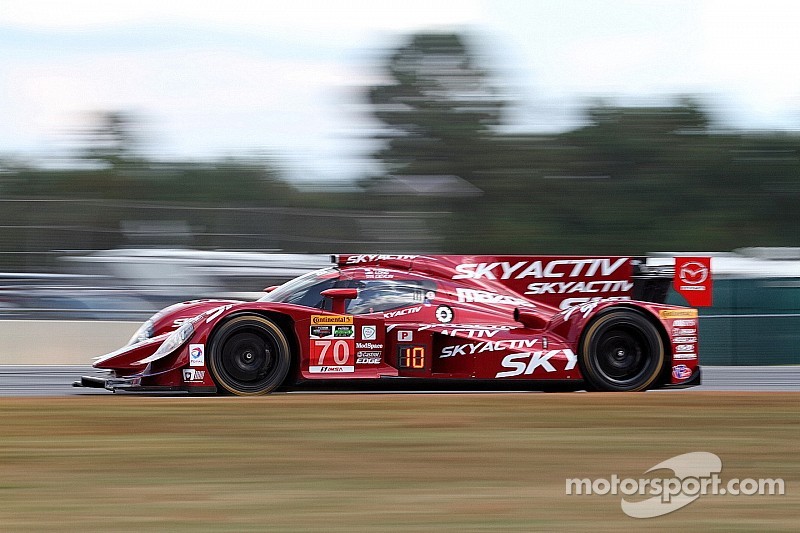 After racing for SRT Motorsports the past two years – finishing second in the 2014 TUDOR United SportsCar Championship GT Le Mans driver standings while helping SRT to the team title – Bomarito returns to racing a Mazda fielded by SpeedSource.

Bomarito recently participated in a private test preparing for the season-opening Rolex 24 At Daytona on Jan. 24-25, driving a Mazda SKYACTIV-D Smart Diesel-powered Prototype for the first time.

The 32-year-old native of Monterey, California was the Rolex 24 At Daytona GT winner with SpeedSource in 2010, and finished third in the Rolex Series GT championship in both 2010 and 2011. He joined SRT Motorsports in 2013, winning two poles while finishing ninth in the American Le Mans Series presented by Tequila Patrón GT standings.

The season-opening Rolex 24 At Daytona also will be Bomarito’s first Prototype race since the 2005 Rolex 24, when he finished 19th in the Ten Motorsports BMW/Riley Daytona Prototype co-driven by Memo Gidley, Michael Valiante and Michael McDowell.

How was your first drive in the Mazda Prototype?

“It was awesome. It’s great to be back with Mazda and SpeedSource. My first impression was that it’s very well balanced. The engineers and other drivers have done an outstanding job over the past year to get a great baseline setup on the car. It’s very drivable. The engine has tons of torque. They’re saying they’ve made great improvements – I wouldn’t know, it was my first time in the car – but it felt real good to me. They told me this is the best that it’s been by leaps and bounds.”

Overall, how did the testing go?

“We had a real productive day. The afternoon was a huge success for the team after we missed the morning due to rain. All their hard work is paying off, and we’re starting to see some big gains. They tell me they’ve made huge improvements from this time last year. The cars are five or six seconds faster already. They made huge steps, and the crew is working incredibly hard. I’m excited and happy to be a part of it. I’m looking forward to being part of continuing the momentum and progress in developing the package.

“Everybody’s real excited. We all can see the future of the program and where it’s heading, and it’s all positive.”

How is it returning to SpeedSource after being away for two years?

“Most of my time with SpeedSource was in the tried-and-true Mazda RX-8, although I did spend some time with the Mazda6. Winning the Rolex 24 with them in 2010 was an incredible highlight of my career so far. We’re doing everything we can to get back to that.”

It’s been a long time, but how is it to be back in a Prototype?

“I did the Rolex 24 in a DP in 2005 – my only race in a Prototype. So it’s been awhile. After that race, I went Formula Atlantic racing. Formula Atlantic was the last time I’ve driven a car with a lot of downforce and ground effects. So coming to the Prototype means a lot of transition, but the guys gave me a lot of laps during today’s test and I feel pretty comfortable in the car.”