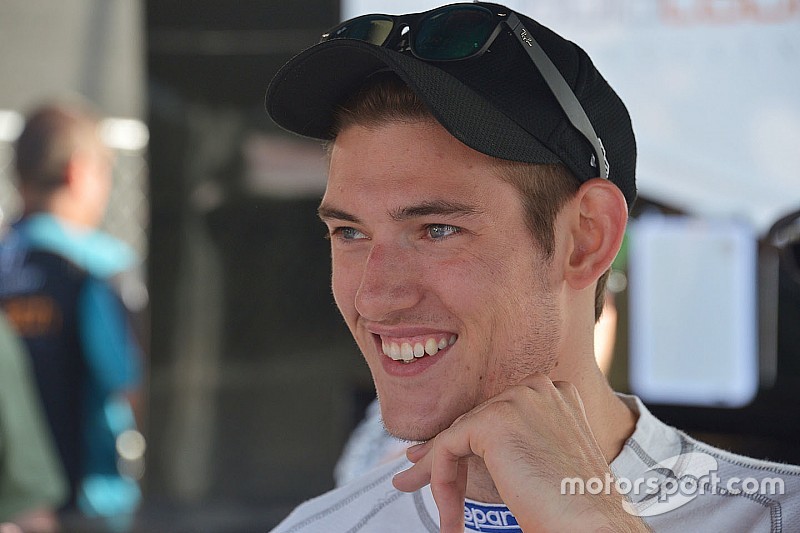 Matthew Brabham, who made his IndyCar debut last May, says he has vague options in the IMSA WeatherTech SportsCar Championship, but also has strong hopes of making his second start in the Indianapolis 500.

Brabham finished second in this year’s Stadium SuperTrucks championship, a season he completed last month on Australia’s Gold Coast. Since then he has remained Down Under to take part in production class touring car races and other opportunities (to be announced soon), as he chases “basically everything” to try and land deals in sportscar and open-wheel racing in America.

Brabham won the USF2000 title in 2012, dominated Pro Mazda in ’13 and finished fourth in the ’14 Indy Lights championship with Andretti Autosport. This year he got his IndyCar break, starting both the Grand Prix of Indianapolis and the Indy 500, driving a third KV Racing entry, under the banner of Pirtek Team Murray.

Talking of his IndyCar prospects for 2017, the 22-year-old dual-nationality American-Australian told Motorsport.com: “Obviously I don’t have any budget which makes it really hard. There were a bunch of seats available in IndyCar this year, but there were so many drivers available too, I can’t be upset or salty about missing out. That’s just the way it goes.

“I was chasing the same rides everyone was – AJ Foyt Racing and Ed Carpenter Racing. There’s still the road/street course seat open at Ed’s team but it requires money. This off-season I’ve been trying hard with some sponsor stuff, and I’ve tried to learn the business side more, too. But I’ve stayed on down here [in Australia] because I’m trying to stay relevant in Australia, too, to get my name out everywhere I can.”

Brabham said there were huge variations in the IMSA WeatherTech SportsCar Championship market regarding money, stretching from Prototypes down to the GT Daytona class.

“It’s strange,” he said, “because there are some [sportscar] teams that ask you for a figure that’s ridiculously large – like I could get a part-time deal in IndyCar for that money. And there are other opportunities where it sounds like I could actually get paid. It really does depend on the team.

“What I’m really excited about is that I’ve always been a Gold-rated driver, and that’s the second question a team will ask you about, after ‘Have you got any money?’ And when you tell them you’re Gold, they always say they’ve already got one of those already and that they’re looking for Silver-rated drivers.

“Well now I have been granted a Silver-rated license, so that should open some doors for next season, including some European stuff.”

Brabham said that having now put himself forward for almost all the IMSA teams, he’s about to start also contacting teams in the Pirelli World Challenge.

“I haven’t chased World Challenge as much as IMSA yet, but I definitely will be,” he said. “There are a lot of good teams and cool cars there, the racing looks pretty great. It’s become a real interest of mine but being down in Australia and World Challenge having a pretty long off-season, it’s not had the same priority as IMSA, which obviously starts in January.”

Although he described it as “frustrating” having put his open-wheel career on hold temporarily, Brabham said he’d also found it satisfying being able to driving several different cars – including testing next year’s USF2000 Tatuus USF-17 on behalf of the series. In the absence of a full-time IndyCar deal, he said having a varied résumé is something he wishes to maintain.

“I’ve got someone looking out for opportunities for me in Formula E for the 2017/’18 season,” he said, “and I’m interested in Global Rallycross Championship and doing some road courses in NASCAR, as well. SuperTrucks has really opened up my eyes as to how much fun it is proving that you’re versatile, whereas I used to be putting my eggs only in the open-wheel basket.

“With Robby [Gordon, who runs Stadium SuperTrucks], I’ve gotten to experience Baja desert racing, and hillclimbs and so on, and I think it does improve your abilities. Just like what you learn on an oval can be applied to fast corners on a road course, everything helps.

“So now I’m ready to jump in anything, to be honest. Even if it’s something really unusual and people might say, ‘Oh don’t do that, you might look bad because all the other guys have more experience,’ then I would still probably do it. And I really want to do that throughout my career.”

Brabham said that despite the uncertainty of the format of the KV Racing team that gave him his break in IndyCar this year, he remains optimistic of at least racing the Indy 500 again in 2017, and possibly parlaying that into other opportunities within the series.

“The full-time IndyCar stuff for me is looking pretty dismal but I think doing some one-off races and in particular the 500 is looking strong; I think I can land a good-value deal. Even if I got nothing else, I do think the budget requirements for Indy are reasonable enough for me to find partners to support it.

“Almost every team I talk to tells me they can run a third car,” he commented, “but then the rest of the sentence is, ‘But it’s gonna take this much.’ I mean, I like the fact that Bobby Rahal has been pretty open about it within the media   about the full-season budget he’d need.

“And Sam Schmidt has been very upfront about possibly running a third car for a few races including Indy. Out of all the teams I spoke to, Schmidt Peterson Motorsport is really looking to do longterm stuff and they want to be the best team in the paddock. Everything they’re doing is gearing towards that – they don’t want to just be there to be there.

“The team structure is really good there as well and I really want to be a part of it, but at the end of the day, they need some extra money to run a third car. But that team would be worth it.”