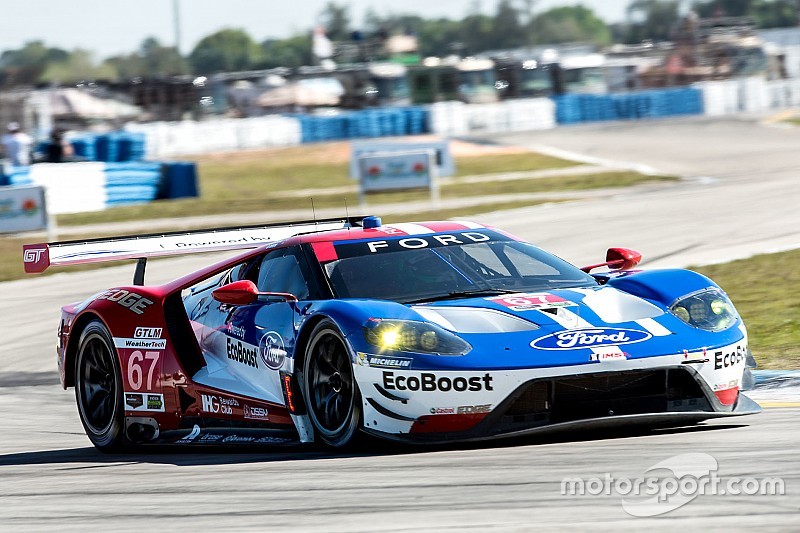 Ford’s Ryan Briscoe and Tristan Vautier's Mercedes GT3 both smashed the track records in qualifying for the 12 Hours of Sebring in their respective GT classes.

Briscoe lapped his Ford GT in 1m55.939s, almost a quarter of a second clear of the second full-season IMSA Ford of Dirk Muller, ahead of Chevrolet’s Tommy Milner and the Porsche of Kevin Estre.

“We’ve been struggling a bit to be honest in practice and it’s been a war to figure out the set up,” said Briscoe. “But we really nailed it in qualifying.

“It was the best the car has been. A good couple of laps, I’m really happy and we’re in good shape for the race.”

Vautier, who shares his AMG Mercedes SLS with team boss Kenny Habul and US racing veteran Boris Said, smashed the two-minute barrier and was fastest in GTD by 0.7s – despite setting the time on his seventh lap on the tires.

He broke the Sebring class record by 2.5s on his way to the class pole, ahead of Connor de Phillippi’s Audi.

“The GTDs are starting to go really fast,” said Vautier. “The car was good, we’ve been chasing a lot of stuff since yesterday.

“Finally we got close to a setup that we had at the test. It felt good. For qually, the car was good. We had a bit of understeer but it was fast.

“I didn’t put too much pressure on myself. It was my first qualifying in IMSA, I focused on my job and didn’t care who was in the other cars and what they were doing.

“Brand new team, a lot to learn still in the races. Now we are focused on the race.”