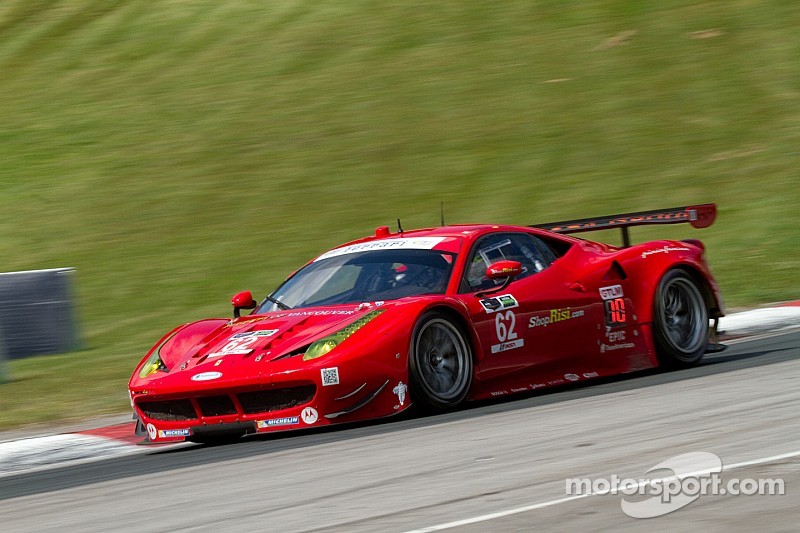 Englewood Cliffs, N.J.) – Sunday afternoon’s TUDOR United SportsCar Championship race at Canadian Tire Motorsports Park would be a difficult one for the Ferrari 458 Italias that compete in the GT-LeMans and GT-Daytona classes.

An incident in the first hour of the race would spell the end of two strong runs for the Ferraris in the GT-Daytona class. Both the no. 555 AIM Autosport Ferrari 458 Italia and the no. 63 Scuderia Corsa Ferrari 458 Italia had enjoyed strong opening stints, with drivers Bill Sweedler and Jeff Westphal advancing several positions.

The no. 555 AIM Autosport Ferrari 458 Italia, which entered the weekend as the GT-Daytona championship leader, was forced to serve a penalty after an incident in CTMP’s turn three. As a result of the same incident, Westphal was forced to bring the car behind the pit wall for repairs. Sweedler and Townsend Bell finished in 13th position in GT-Daytona. The Scuderia Corsa crew would work hard to return the Ferrari to the race, and it was classified in seventeeth position.

In the GT-LeMans class, drivers Pierre Kaffer and Giancarlo Fisichella had a challenging race to finish in tenth position in the no. 62 Risi Competizione Ferrari 458 Italia.

Sweedler and Bell maintain their lead in the GT-Daytona driver championship, and Ferrari is now second in the manufacturer championship.

The next race on the TUDOR Championship schedule will be July 24-25 at the Indianapolis Motor Speedway in Indianapolis, Indiana.