The 01 took home the win in its first trip to Sebring.

Marino Franchitti, Scott Pruett, and Memo Rojas combined to win Saturday’s 62nd running of the 12 Hours of Sebring, handing Ford its first overall win in the historic event since 1969 and Chip Ganassi his first Sebring win.

After 11 caution periods (eight of which flew in the first six hours), the race came down to the final restart. With about 20 minutes remaining, Franchitti, who made his final pit stop five laps before the other two contenders for the win, Ryan Dalziel and Sebastien Bourdais, led the field to the green flag. Several GT cars separated Franchitti from Dalziel and Bourdais on the restart and Franchitti used that to his advantage, opening up a nine-second lead on Dalziel and Bourdais.

As Bourdais faded near the end, Dalziel was able to take a few seconds out of Franchitti’s lead. But that was not enough, as Franchitti crossed the finish line 4.682 seconds ahead of Dalziel’s Extreme Speed Honda ARZ-03b. Bourdais ended up third in the No. 5 Action Express Corvette DP.

“We were lucky the way the traffic went on the restart,” explained Franchitti. “We found a sweet-spot at the end. It’s pretty big to bring Ford back to victory lane. To win overall is pretty special. This is certainly the biggest day in my career.”

“It’s incredible,” said Pruett. “We struggled and we worked through it. The car was a handful for a while. This is special because it’s one of the few races I have not won and I wasn’t sure if it was ever going to happen.”

Utilizing superior top-end speed, Corvette DPs swept the top-four finishing positions in the season-opening Rolex 24 at Daytona. But the third-place Action Express entry, which Bourdais shared with Joao Barbosa and Christian Fittipalid, was the only Corvette DP to finish in the top-five at Sebring. Series officials saddled the Corvette DPs with smaller engine air restrictors prior to the race, but it was not clear whether the smaller restrictors hindered the Chevrolet-powered cars as Sebring is known to favor handling over straight-line speed. Series officials also gave the Fords a slightly larger air restrictor, though that did not seem to be the difference in the race for the Ganassi squad.

After poor results at Daytona, the open-cockpit LMP2 cars showed that they can still be competitive in the new United SportsCar Championship - especially on tracks that place an emphasis on handling, like Sebring. The Extreme Speed Hondas finished second and fifth, respectively, while the Oak Racing Morgan Nissan ended up fourth. 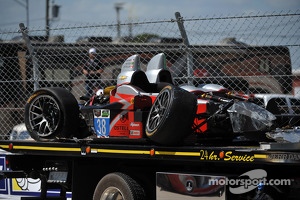 The top-nine overall finishers were all on the same lap.

Only two Prototype Challenge cars (all of which are Chevrolet-powered Oreca FLM09s) were able to avoid the crashes and spins that ensnared just about every other car in the class: the Daytona-winning Core Autosport entry shared by Colin Braun, Jon Bennett, and James Gue and the class pole sitting RSR Racing quartet of Bruno Junqueira, Duncan Ende, and David Heinemeier. In the end, the Core squad took its second straight win of the year, with Braun beating Junqueira to the checkered flag by 2.757 seconds.

“That was exciting,” said Braun. “It was right down to the wire. I just had to hold off Bruno.”

“It’s been a while since I have won here, so it’s good to be back up on the top step of the podium,” said Bergmeister.

A different type of Sebring tradition